How do we calculate the thermodynamic internal energy difference between two states?

So I've been doing a course in Thermodynamics for a while and one of the questions that occasionally struck me was "How do I practically calculate the difference of internal energy between two arbitrary states, A and B?"

Thermodynamics by H.B. Callen provides a really good insight into this and according to him, Joule, after his experiments concluded that- "In an adiabatic system, any two equilibrium states can definitely be connected by some mechanical process and the work done in that mechanical process is the internal energy difference $\Delta U$ between them".

I'll start with a simple example of a "container with a piston" system with an "ideal gas" inside. 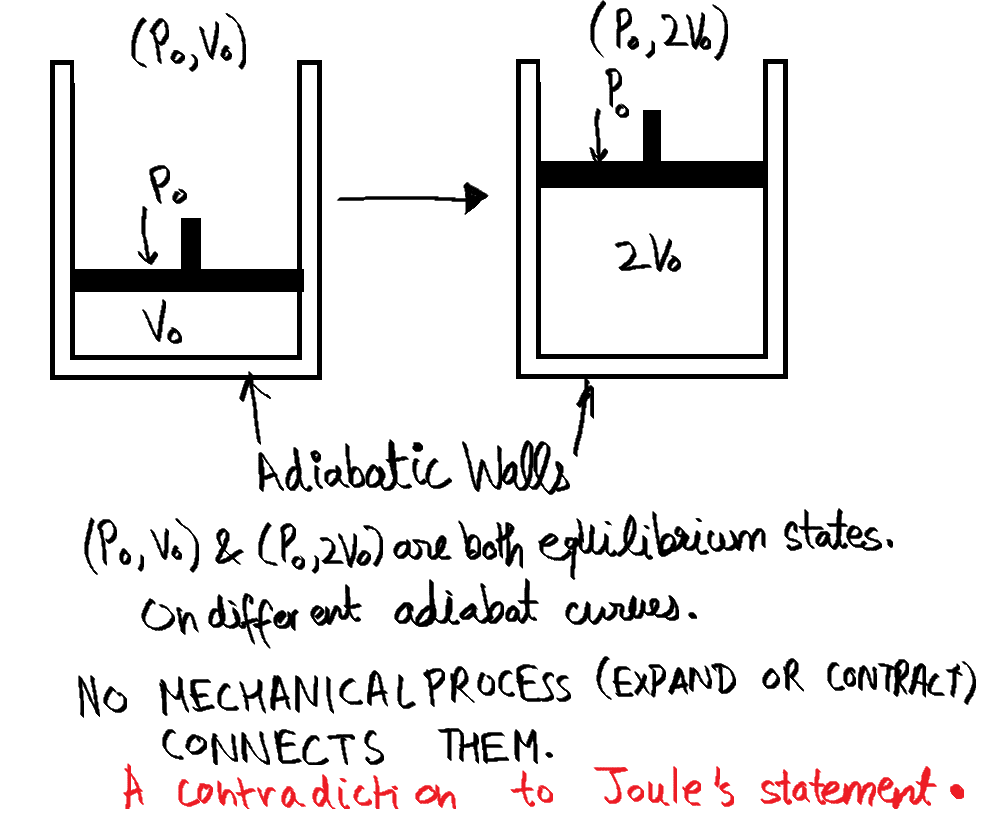 Edit: I changed the example which I gave and added an image to further clarify the problem.

If you only can expand or contract the piston, indeed you cannot connect the two states with a mechanical process. But you can devise different mechanical ways to act on the system.

I borrow one from Callen himself, Thermodynamics and an Introduction to Thermostatistics, paragraph 1-7: through a very small hole in the adiabatic wall, you can pass a thin shaft carrying a propellor blade at the inner end and a crank handle at the outer end. Doing so without letting the gas escape and without perturbing the system would be very difficult, but not impossible in principle (anyway in practice it would be easier, and equivalent, to prepare the system with blade and handle already present from the beginning).

By turning the handle, you can now do a measurable mechanical work on the system, that increases its internal energy. If you keep the external pressure on the piston constant end equal to $P_0$, this energy increase will result in a gradual expansion. In this way you can move from $(P_0,V_0)$ to $(P_0,2V_0)$.

EDIT: The point is: we only need a process that connects the two states, during which all the energy transfers are directly under control and measurable. That's the whole point of having adiabatic walls (heat flow is not directly controllable or measurable) and of using only mechanical processes (measuring mechanical work is often as easy as measuring a displacement). When we know all the energy transfers involved in the process, then we know also the energy difference between initial state and final state.

As noted in a comment below, the process could be one-way (as it is in our example) but this makes no difference as long as all energy transfers are under control.

Not the answer you're looking for? Browse other questions tagged thermodynamics energy equilibrium adiabatic or ask your own question.

6
Can the work done between two non-equilibrium states be calculated?
2
Is it Possible to have Adiabatic Processes other than $PV^\gamma$ for the ideal Gas?
3
Thermodynamic Internal Energy Reference States
6
Defining thermodynamic quantities (Internal energy and Heat)
1
What are the exact conditions under which one can say for sure that the entropy of a system will increase?
0
Internal energy of a reversible adiabatic process
0
Defining internal energy for adiabatically inaccessible states
0
First law needs adiabat definition but adiabat definition needs heat definition in first law
1
Difference between thermodynamic potentials and free energy
0
Please justify the mechanism