I am trying to understand graphene as a topological insulator.

The spin orbital interaction in graphene is very small (~10mK?). But if we consider that, then graphene should be a topological insulator. And at the edge electrons should move in opposite direction according to their spin as shown in the figure for graphene flake with zigzag edges! 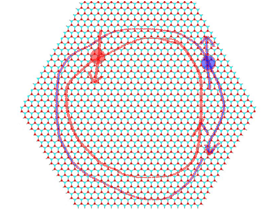 Is it the right picture?

update1: Thanks for the comments. Indeed the question is not well defined and I will try to refine it a bit as further as I could.

If you glue the 2D Brillouin zone properly you will get a torus. And as I understood there are two cases shown in figure below that create a gap in the 'bulk' graphene. Case 1 show two valleys without gap. Case 2 is the normal insulator case. Case 3 is the TI case. 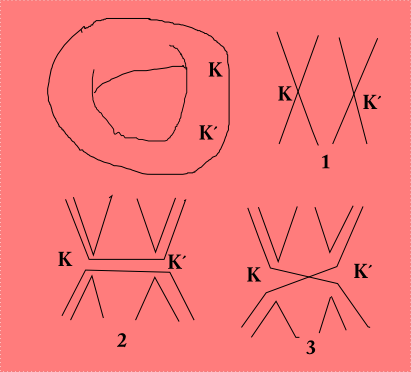 For the energy space I mean the band structure (I don't know its relation with Hilbert space.) Not sure about how to glue it and if a Klein bottle will be formed.

update2: Just realized that last update without considering the spin. If we do that, then the momentum space should be 2 torus each for one spin instead of one torus.

Then the problem is how to glue (topologically map) the band structure on that.

update3: Just got some ways of mapping 2 tori to a Klein bottle. (shown below, sorry for the bad drawing)

The cover of the book shows how to map a torus to a sphere.

Is this the way to understand mapping from momentum space to band structure (or topology of the system)?

update4: Well, the next question is how this relates with Berry flux and Chern number. The band structure I mentioned above should be $<\Psi(k)|H|\Psi(k)>$. And here $H$ is proportional to $\nabla_k$. Berry flux ~ $\nabla_k\times <\Psi(k)|\nabla_k|\Psi(k)>$. With it one can calculate the Chern number. Is the right way to link those two pictures? How do this relate with critical points in 2D vector field?

update after 4tnemele's nice answer Thanks for the answer! I must say it is a very nice one.

But may be it is still worth to clear why I asked this question. I am not in the TI field and have no strong background in condensed matter physics, algebra topology, differential geometry etc. Once I read that graphene is a TI. I just cannot see how to construct the calculations of those topological invariants from what I knew at that time.

But I have to start from somewhere and do it in 'my own way'. I intuitively think that the 'energy space' could be a 2D non-orientational close surface. The only thing come into view is a Klein bottle.

I thought it could related with the picture below. If you glue fiber on a torus, you can have no critical point. But it shall be different for the non-orientational surface case (here I call it a Klein bottle.) I thought those fiber could be related with Berry phase. Then I reached the 'energy space', I knew it might be somewhere in between the links. I don't know how to imagine the shape of related Hilbert space. 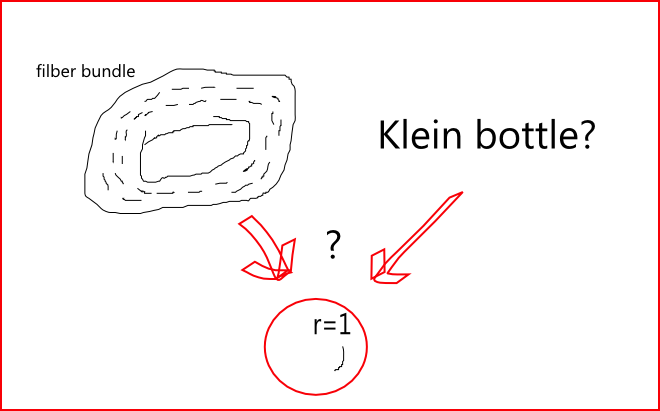 I hoped I can find a very intuitive way of 'seeing' how to construct the calculation. But now I think I need to read a bit more and it may be other easier ways (like begin from equations) to understand the problem. And I think that to clear the background of the question will help other people to answer it. It is a lesson to me.

I am still not sure what you precisely want to be a Klein Bottle, but let me make some comments that might help you clarify what exactly you want to know. (Warning: I am writing this while being very tired, people are invited to correct me.)

This I mention, in case there were any misunderstanding here. Now to your question, how can one see the connection between band structure, Brillouin zone and topology? The interesting thing is that we only need to analyse the bulk in order to probe the topology of the system, although the interesting physics is along the edge (this is called bulk-edge correspondence in the litterature).

Assume we add a spin-orbit coupling to graphene that preserves $S_z$, meaning that although the spin $SU(2)$ symmetry is not preserved it is still well-defined to speak about spin-up/down (so a $U(1)$ subgroup is still a symmetry). I think that this term will open a gap at the Dirac points at $K$ and $K'$ and the system turns into an insulator. Since $K$ and $K'$ are not important anymore, we have a four-band model (two from spin up/down and two from sub lattice A/B). Since $S_z$ is conserved, the (bulk) Hamiltonian is block diagonal

where $H_{\uparrow}$/$H_{\downarrow}$ are $2\times 2$ matrices. Since the system preserves time-reversal symmetry, the two Hamiltonians are related by a time-reversal transformation $H_{\downarrow} = \Theta H_{\uparrow}\Theta^{-1}$. Since the Brillouin zone is a torus, we need to classify maps $T^2\rightarrow \mathcal H$, where $\mathcal H$ is the appropriate space of $4\times 4$ matrices obeying some constraints (gapped and time-reversal invariance). For this model, however, we don't need to analyze $\mathcal H$. Since the model is block diagonal we can consider each block separately, any $2\times 2$ matrix can be written in the basis of Pauli matrices

Since the spectrum is $E(\mathbf k) = d_0(\mathbf k) + \sqrt{\mathbf d\cdot\mathbf d}$, we can continously deform $d_0$ to zero and deform $\mathbf d\rightarrow \hat{\mathbf d}=\frac{\mathbf d}{|\mathbf d|}$ without closing the gap (and thus still be in the same topological class). Thus we can classify each block of the Hamiltonian, by the map $T^2\rightarrow S^2$, $\mathbf k\rightarrow \hat{\mathbf d}(\mathbf k)$. This is basically classified by the second homotopy group of the 2-sphere $S^2$ (winding number), $\pi_2(S^2) = \mathbb Z$ (well the map is from a torus $T^2$ and not $S^2$, so we need an argument for why we can use the second homotopy group but this I will not delve into right now). The winding number of $\hat{\mathbf d}(\mathbf k)$ is given by the degree of map formula

Thus each block form a Integer Quantum Hall effect separately (see also this answer). Note that $C_1$ is basically the first Chern-number where $\epsilon^{\mu\nu}F_{\mu\nu} = \hat{\mathbf d}\cdot\frac{\partial \hat{\mathbf d}}{\partial k_x}\times\frac{\partial \hat{\mathbf d}}{\partial k_y}$, $F_{\mu\nu} = \partial_{\mu}A_{\nu} - \partial_{\nu}A_{\mu}$ where $A_{\mu}(\mathbf k) = -i\langle\psi(\mathbf k)|\partial_{\mu}\psi(\mathbf k)\rangle$ is the Berry phase for the filled states (to see how to rewrite the Berry phase in terms of $\hat{\mathbf d}$ see this paper. The reason I have avoided the Chern number approach is that, one needs to go into discussing vector (or principal) bundles which just would complicate everything even more).

However if one has a perturbation that breaks $S_z$, then our construction breaks down. But it turns out that $C_{spin}$ is still well defined but only modulo 2, $\nu = C_{spin} \text{mod} 2$. This is why people call this a $\mathbb Z_2$-topological insulator, see more details here (pdf-file).

There are of course many other ways of seeing the connection to topology and this is probably the most explicit and elementary way to do it. Is this what you wanted? I suspect that you are interested in the map $T^2\rightarrow\mathcal H$, $\mathbf k\rightarrow H(\mathbf k)$ and when you say "energy space" you mean $\mathcal H$. It turns out that this space is homotopy equivalent to $\mathcal H \approx U(8)/Sp(8)$ (called the symplectic class) by a band-flattening procedure. Sadly I am too tired to see if this is diffeomorphic to the Klein bottle. Is this what you are interested in?

This answer got much longer than originally planned.

Not the answer you're looking for? Browse other questions tagged solid-state-physics topological-insulators graphene or ask your own question.