For the energies, there is always graphs like that below, showing the splitting of the energy bands at the zone boundaries, when switching from the free electron to one in a crystal. 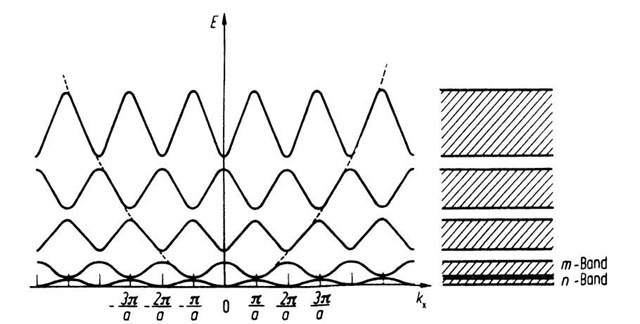 A comparable, and better, schematic can be constructed by imagining bringing together many atomic potentials and would look like figure 1c here:

Energy Bands in Solids and Their Calculations

Note how between each atom, the potential bends over to connect to its neighbor's potential when added, thereby flattening the potential between them. So the electrons in the conduction band of a metal have energies that obviously sit below the work function level, but above the atomic potentials. The potential they see is very flat.

In general when atoms are brought together to construct a solid, the valence electrons will be enter into Bloch states which extend throughout the crystal, while the core electrons remain essentially localized. The core electrons do not show Bloch characteristics.

At the other end of the spectrum, crystals that have high ionic character, such as NaCl, the valence electrons do not show Bloch characteristics. The electronic structure of the ions is essentially a closed shell.

The valence electrons in solids that have more covalent bonding character will also have Bloch character, just like the valence electrons in a metal. Where these bands actually sit in relation to the barrier that exists between the atomic cores will likely vary from solid to solid. As in the metallic case, some part of the valence band will likely sit below the barrier between atomic cores.

An old text, but a good one, that discusses these points is J.M. Ziman's Principles of the Theory of Solids. Chapters 3 and 4.