Why is the kinetic energy of this particle of mass $m$ zero at the bottom point? [closed]

Ask Question
Asked 1 month ago
Active 1 month ago
Viewed 57 times
-1
$\begingroup$
Closed. This question is off-topic. It is not currently accepting answers. 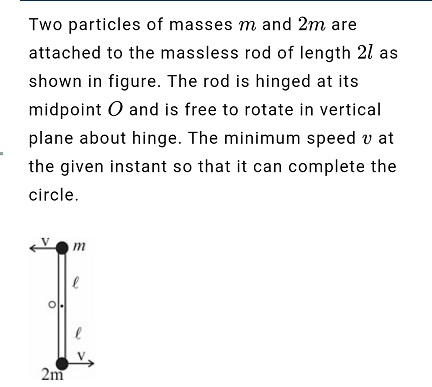 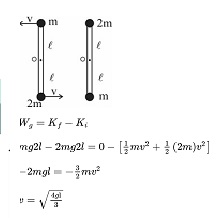 Why is the final kinetic energy of the particle of mass m zero.It should have some velocity when it reaches the bottom??

Can we solve this solve by using the concept of reduced mass system?

Because we need the minimum speed by which the circle gets completed i.e. it stops when the circle is just completed. If the speed given to $m$ is greater than $\displaystyle \sqrt{\frac{4gl}{3}}$ then it completes the circle as well as have some velocity at the lowest point.

The torque of mass $2m$ is greater than that of $m$ about the center of rod and hence it will tend to rotate the rod on clockwise direction (if velocity given to $m$ is towards left). But, if $m$ has sufficient angular momentum, then it can it can complete the circle. However, the torque due to $2m$ will oppose this motion, too.

Also, for a system of two particles with masses $m_1$ and $m_2$ exerting equal and opposite forces on each other and subject to no external forces, concept of reduced mass can be used which is not the case here.

Not the answer you're looking for? Browse other questions tagged newtonian-mechanics energy rotational-dynamics velocity or ask your own question.