Why does a gravitational field permanently alter the direction of photons?

Given we observe that light do follows path A (gravitational lensing) instead of path B, is there any direct empirical evidence about how photons and gravity interact, other than stating that photons are massless particles when we observe massless behavior and massive when we observe massive behavior (gravitational lensing). I understand that energy can theoretically be turned into matter, but why would it behave like matter when is traveling in a massless configuration?

I'm not challenging that photons follow the observed geodesic trajectory (path A), nor do I challenge the mass–energy mathematical 'equivalence'. My question pertain to what 'other' empirical evidence do we have about massless particles traveling at the speed of light and behaving like massive particles 'at the same time'.

Couldn't it be argued that the gravitational lensing effect (ɡ) is the result of the space-time continuum itself being irreversibly 'attracted' (processed) by the mass (irrespective of any event-horizon), and not merely 'bended' (reversible/bidirectional) as traditionally described, without requiring the introduction of gravitons and massless particles exerting gravitational attraction beyond the local perturbation of the spacetime geometry. 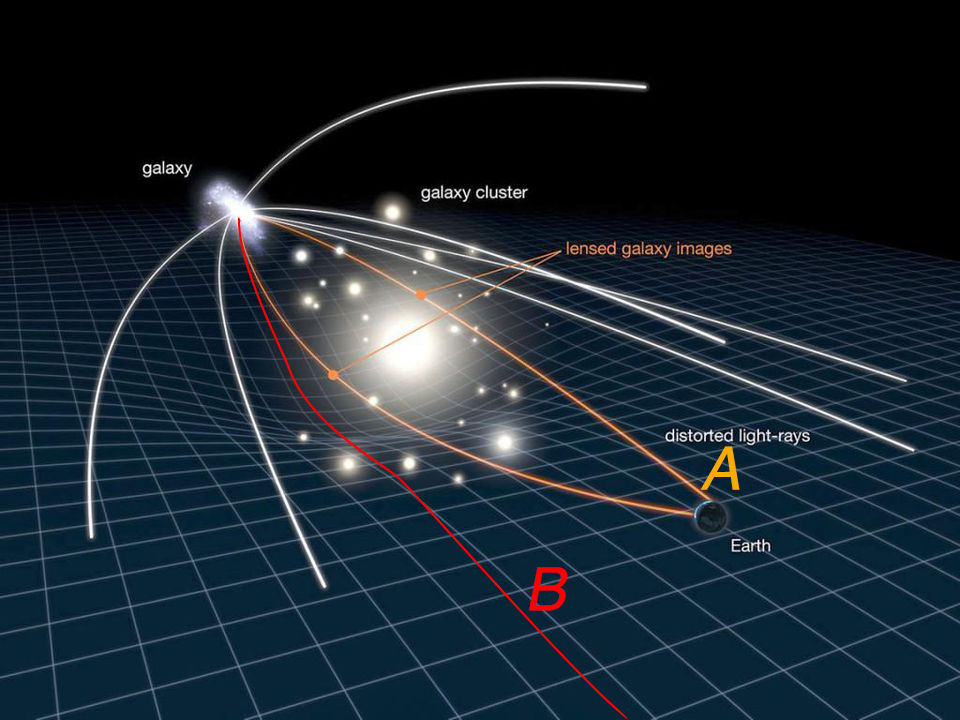 If light photons are massless particles traveling in a vacuum, why is the direction of an angular photon permanently affected by a localized gravitational field as currently described by general relativity (path A on the figure - gravitational lensing).

Shouldn't they still follow a 'linear' (not straight) path within the projected space grid (path B on the figure), respecting the original angle after they exit the localized gravitational field? In other words, after they get out of the space-time bump. 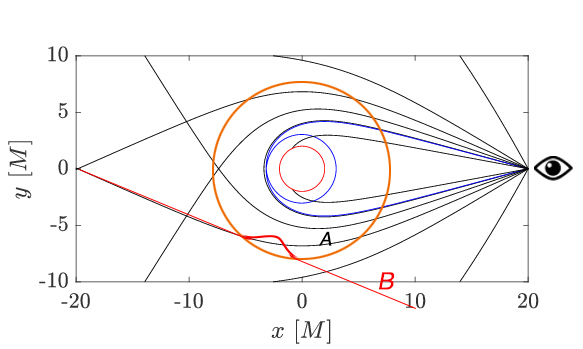 UPDATE I: Thanks for all the input, I flipped the order of the question to clarify its depth.

UPDATE II: Added a clarification about geodesics and mass–energy equivalence.

In a sense, the photons do travel in a straight line. They follow what are called geodesics, which are the shortest paths between two points in a general curved space-time. For the case of a flat space-time, indeed the path that photons would follow would be the familiar straight line, but when the space-time is curved, then their trajectories differ from the straight line, as is shown on path A in your picture.

The curving of space-time is governed by Einstein's theory of General Relativity, which is our current best theory of gravity.

Here is an example, where the geodesics are computed for the Schwarzschild and Kerr solutions, respectively, to Einstein's field equations. The Schwarzschild solution does not describe the curvature caused by the sun, but it is a sufficiently good approximation if you are far enough from the surface.

@Stratiev gave a pretty good answer on the question, but I would like to touch upon the fact of why photons interact gravitationally even though they have no mass.

General Relativity is governed by the Einstein Field Equations, in which there is a term $R_{\mu\nu}$, which describes the 'bending' of space and there is another term $T_{\mu\nu}$ which is a compact way of encoding the energy of matter.

Physically, this means that not only things which have mass, but also any thing that has energy can actually have a gravitational effect (by influencing space around it). Photons do not have any mass, but they do have energy (given by $E = pc$), so by principle they could be affected gravitationally. This is not possible according to Newton's theory, but in General Relativity, even pure energy participates in gravitational interactions.

Couldn't it be argued that the gravitational lensing effect (ɡ) is the result of the space-time fabric itself being irreversibly 'sucked' (processed) by the mass (irrespective of any event-horizon), and not merely 'bended' (reversible/bidirectional), without requiring the introduction of gravitons and massless particles exerting gravitational attraction beyond the local perturbation of the spacetime geometry.

We still don't know whether gravitons exist. As far as we know, gravity is caused due to the bending of space-time.

I also think that you are confusing the gravitational lensing phenomena as an actual lens. Well, it is not like refraction, so the light which comes at a particular path does not leave as it came in.

Think of it more like a slingshot, which takes the light, swirls it around, and then leaves it. Then once the photon gets out the curved spacetime region, it continues to propagate in the new deflected, direction. This is not exactly right; there is no 'swirling' but it helps as an useful analogy to think of it that way. The light comes in and gets a direction change in curved spacetime. Then when it enters (comparatively) flat spacetime, it continues to move in the new direction.

Edit 1: If anything can enter the curved spacetime it will be affected. Not only matter, but energy, light etc. That is because the geometry of spacetime has a effect on everything that is being described in that spacetime. If one object enters the spacetime 'bump', then every other object will behave in the same way in the bump. That is because of the bump is just a curvature of spacetime, so you can think of it as a change of co-ordinates, so a change in co-ordinates changes the way everything behaves and moves in those co-ordinates.

Because photon have rest mass.Here is an experiment:Schmitt,Weitz,Vewinger,Klaers "Bose-Einstein condensation of photons in an optical microcavity”,Nature 468(7323):545-548
There is no experiment for the opposite.Moreover,virtual photon has mass.

Not the answer you're looking for? Browse other questions tagged general-relativity visible-light photons geodesics gravitational-lensing or ask your own question.