Why do tidal waves appear so suddenly in some rivers?

As tide approaches in lower part of some rivers (e.g. Ganges), a several feet high tidal wave enters from the sea against the flow of the river (making a great noise), and the water level suddenly rises as the wave proceeds.

Why does the tidal wave appear so suddenly?

I am unsure if this occurs in seas as well, but I have seen this phenomenon in rivers near the sea.

What you are describing is called a tidal bore.

Bores occur in relatively few locations worldwide, usually in areas with a large tidal range (typically more than 6 meters (20 ft) between high and low tide) and where incoming tides are funneled into a shallow, narrowing river or lake via a broad bay. The funnel-like shape not only increases the tidal range, but it can also decrease the duration of the flood tide, down to a point where the flood appears as a sudden increase in the water level. A tidal bore takes place during the flood tide and never during the ebb tide.

In the ocean the sea level rises quite slowly (only a few feet per hour). But in the shallow water of rivers (and also in funnel-like bays) this will result in a sudden wave-like rise of the water-level. Due to the small slope of the river the slow vertical rise (a few feet per hour) is converted to high horizontal speed (several kilometers per hour) of the wave-front. And due to the funnel-like shape (from a wide sea bay to a narrow river) the height of the wave front piles up on the way.

Here is a real image of the phenomenon. 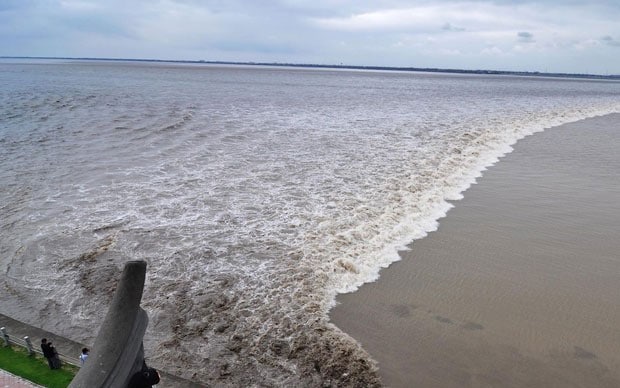 The phenomenon which you describe is known as a tidal bore. To understand it, one has to go beyond the strictly idealized linear theory for waves as taught in most courses of physics and consider waves that reach to a finite depth under the water surface. This is because the tug of the Moon on the water affects the entire ocean, from the surface to its very depth, and creates waves that may be seen as analogous to tsunami in the sense that they affect the entire water column (even though tides create much milder waves than tsunami).

The first step to the formation of a tidal bore is the approach of the very smooth, long-wavelength tidal wave to a broad shallow bay. As the wave enters the shallower water, it tries to conserve some of its momentum and energy by becoming steeper and higher, which also distorts the form of the wave. This can be derived from Stokes' wave theory and is known as wave shoaling. The shoaled wave is then further funneled into the river and can further increase the amplitude of the bore.

In an ideal set of circumstances, what forms in the river is called a solitary wave. Even though it is a solitary wave, it does not disperse due to interaction with the river bed, and this is the basis of the tidal bore. Some pretty fine-tuned circumstances are needed for a tidal bore, though, it will easily disperse at the bay, or the tidal wave simply isn't strong and fast enough to form a solitary wave in the first place. So you are lucky to have experienced it in your region!

Just adding a remark not covered by previous answers which are already good.

I recommend experimenting at home. The basic ingredient is a wide body of water being gently tipped into a narrowing, shallow funnel shape (the river with its estuary). The wide body of water only needs to move slowly, but as it meets the narrowing funnel the water there has to move more and more quickly and also get deeper. The result is a "pile" of water "spilling" up the river, a bit like the way a spill of water on the ground will travel outwards.

I am aware this is a physics site however, having experienced the phenomenon. I'd like to offer a lay explanation.

When the tide comes in over a very shallow inlet, the leading edge of the water moves very quickly.

I used to anchor my sailing boat on a drying-out mooring (Bidston, Mersyside, UK). The sandy bay was long and narrow and had no river flowing into it. Only the tide could enter. I would walk to my boat just before the tide was due in, then sit and wait. Such was the rate of the water rise that my boat (that leaned over due to its keel) would go from tilted to upright in just a few minutes. The leading edge of the tide moved faster than a person could run. Note: This effect causes many deaths of unknowing tourists on certain coasts.

Imagine that the tide is entering a river delta. Let's look at two hypothetical cases.

... average tidal range in the Mediterranean is about 30 cm, which is less than changes in sea-level brought about by wave action and atmospheric conditions. Tides are thus not important in the Mediterranean except for the Northern Adriatic and the Gulf of Gabes where the tidal range reaches about 1 m. http://www.shadowservices.com/nature/Maltese/Geomorph/geog.htm#:~:text=The%20Mediterranean%20has%20an%20average%20depth%20of%201500,brought%20about%20by%20wave%20action%20and%20atmospheric%20conditions. 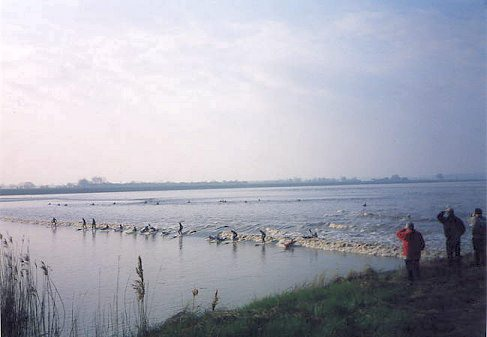 For the most noticeable bore you need the following factors:

Last year I attended a guest lecture by Sir Michael Berry of the University of Bristol, UK. The lecture was about this exact topic (See here). It was insightful and a potent reminder of the power of thinking from first principles.

I encourage you to watch this as it should be more satisfying than any answer I could write down here. However, as alluded to in other answers, the unique behaviour of tidal bores in a tidal system stems from the ratio of the depths $r$ of the upstream and downstream river depths, denoted by $d_1$ and $d_0$ respectively: \begin{equation} r = \frac{d_1}{d_0} \end{equation}

where a tidal bore is defined as having $r > 1$. This stems from assuming the continuity of an element of water and Newton's law being applied to that element.

Not the answer you're looking for? Browse other questions tagged newtonian-mechanics fluid-dynamics newtonian-gravity tidal-effect or ask your own question.

228
Does Earth really have two high-tide bulges on opposite sides?

14
Why can't one see tidal effects in a glass of water?
26
How can the Moon have such a strong effect on the ocean?
2
Why doesn't no rotation imply tidal locking?
19
Why does the lake surface appear darker in some areas?
48
Why do some location on Earth have only one tidal maximum per day instead of two?
9
Measuring tides in a swimming pool
0
How do tidal forces change gravitational waves
31
Does bottle water rise a little bit on full moon days?