I have read in my textbook that maximum work is done by gas in a reversible expansion, but I do not know the reason behind it. Also is work done by gas maximum in reversible compression also?

Its almost true. Of course, Jamie would beg to differ.

However, the general logic is simple. If you have something that's irreversible, energy is lost. That energy was work that could have been used to produce valuable work.

If you consider this gas expansion as part of a cycle, then it is more clear that that irreversability calls for more work to be done to reset the system, and that is where the saying comes from.

What makes it difficult to understand is that many of the more expressive uses of expanding gas, such as Jamie's example above, are one-shots which waste a considerable portion of their energy. In exchange for wasting that energy, they can be constructed to hold onto a much larger total energy and emit that energy rapidly.

Thermodynamically the reversible heat is defined as TdS and dS>Q/dT according to the second law of thermodynamics. According to Transport phenomenon the heat of compression/expansion is given by $$ \rho c_p \frac{\partial T}{\partial t} = - (\nabla \cdot q) -(\frac{\partial ln( \rho)}{\partial T})_p \frac{DP}{Dt}- \tau:\nabla v $$ so energy is lost as heat as a function of DP/Dt how fast we compress the gas or a non reversible process. also the last term is the viscous dissipation

I have read in my textbook that maximum work is done by gas in a reversible expansion, but I do not know the reason behind it.

FIG 1 is an example of a reversible and irreversible isothermal ideal gas expansion process connecting the initial and final equilibrium states 1 and 2.

From the ideal gas law:

Since $W_{Rev}>W_{Irr}$, the viscous friction work $W_{Vf}$ is negative, meaning it dissipates energy that would otherwise be available for doing useful work. The irreversible work done by the gas is somewhat analogous to the work done on or by a parallel spring damper system, where the viscous friction work is the heat dissipated in the damper, and the reversible work is that done on or by the spring. 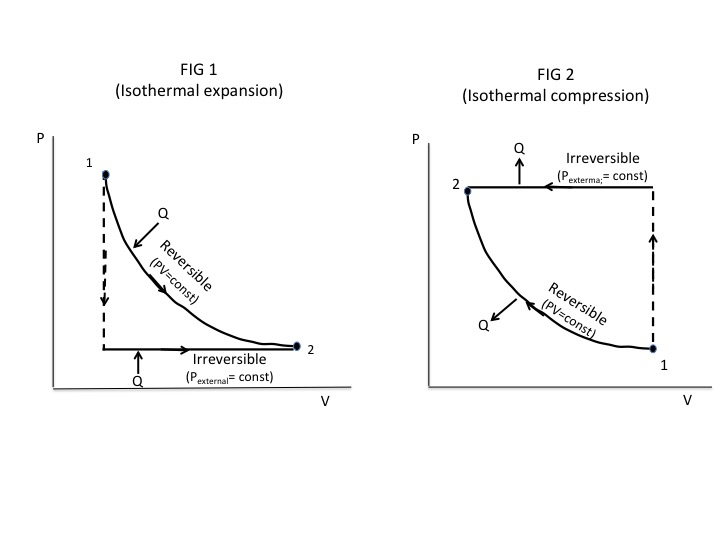 Not the answer you're looking for? Browse other questions tagged thermodynamics work reversibility or ask your own question.