Theoretical question about velocity and acceleration

Imagine you have a ventilator that is spinning madly an creating strong air up force upwards. Then you put in the middle with a holder a paper ball. Then some-have detach the paper from holder. Sure it will fly up. The question is - would it have a instant and constant up velocity or would it accelerate (from slower to faster) to some limit? 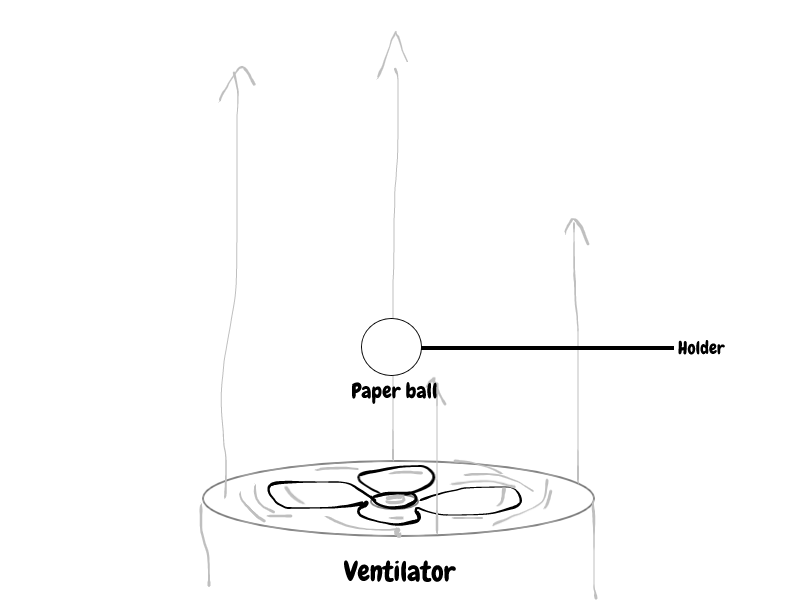 I disagree with the accepted answer. The forces acting on the ball besides gravity isn't a spring like force $k x$ as stated. It is an air resistance term. It has the form of $\beta v^2$

The air stream is at constant velocity $v$, and the speed of the ball upwards is $\dot x$ then the equation of motion is

So initially $v-\dot x >0$ and the ball might accelerate upwards if the air resistance is larger than the weight.

But at some point the air resistance we reduce below the weight and the body will start to decelerate. It will continue with cycles of acceleration and deceleration with its speed hovering around the air stream speed $v$.

There is an analytical solution for the time it would take to reach a certain speed $\dot{x}$ (inverse problem), since acceleration is only a function of speed, or $\ddot{x} = f(\dot x)$ only.

In real life thought the air stream speed falls off with distance making the above equation that much harder to solve.

It would accelerate. From the moment you detach it, there would be two forces acting on the paper ball: gravity and the ventilator. Lets assume that the force increases approximately linearly when going downwards. Then you could describe the motion by: \begin{equation} m \frac{d^²x}{dt²} = -kx(t) -mg \end{equation}
This is the equation of a harmonic driven oscillator with constant driving force. And one can imagine that the point where you placed it would be the lower turning point of the periodic motion that will result.

Not the answer you're looking for? Browse other questions tagged newtonian-mechanics fluid-dynamics velocity projectile drag or ask your own question.

4
Will a ball thrown straight up in a train land in same spot (in real world)?
11
Acceleration of two falling objects with identical form and air drag but different masses
0
is centrifugal release equal to explosive release
5
Is it faster underwater to go down without air or up with air?
2
Do rotating non-circular projectiles also experience Magnus lift?
0
Question about torque reaction of a helicopter
2
Throwing an object with air resistance
0
If we put a ball around a piece of atmosphere, will this affect its acceleration while falling to Earth?