So, I plotted a concave mirror on a Cartesian Plane using the equation $x^2+y^2=R^2$ and also added a little constraint to make it look more like a concave mirror. The constraint was $x > 0$, $-R+1 \leq y \leq R-1$, but that's not the point here. Here's what the mirror looked like : 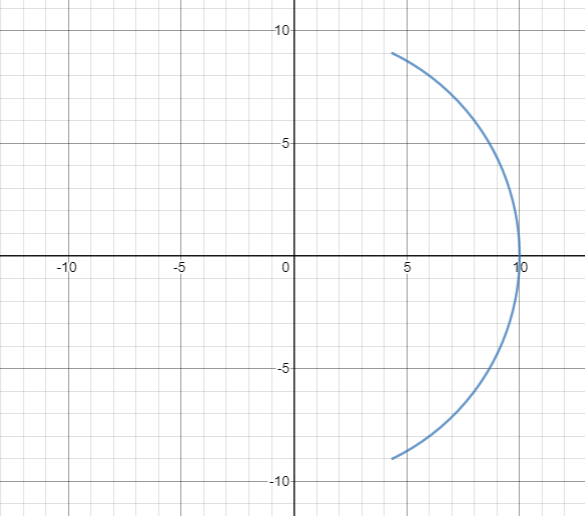 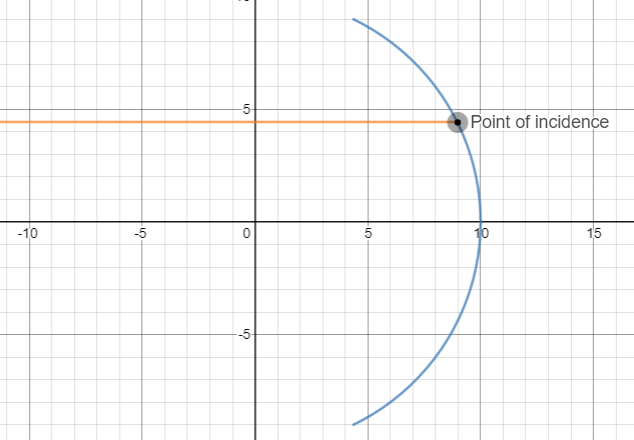 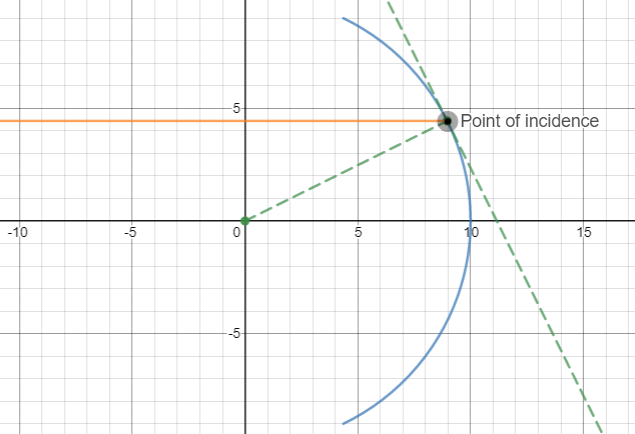 Now, I thought that if I could find another point on the reflected ray, then I would have two points, that point that I will obtain and the point of incidence. Using these two points, I can figure out the equation of the reflected ray. Now, to find the other point I took a point $(0,h)$ on the incident ray and then evaluated what its coordinates on the reflected ray will be. I observed the behavior of the point when it will be rotated with the point of incidence as it's centre and the angle of rotation equal to $2\alpha$, where $\alpha$ is the angle of incidence, that is, the angle between the incident ray and the normal.
The following diagram would help to explain it better : 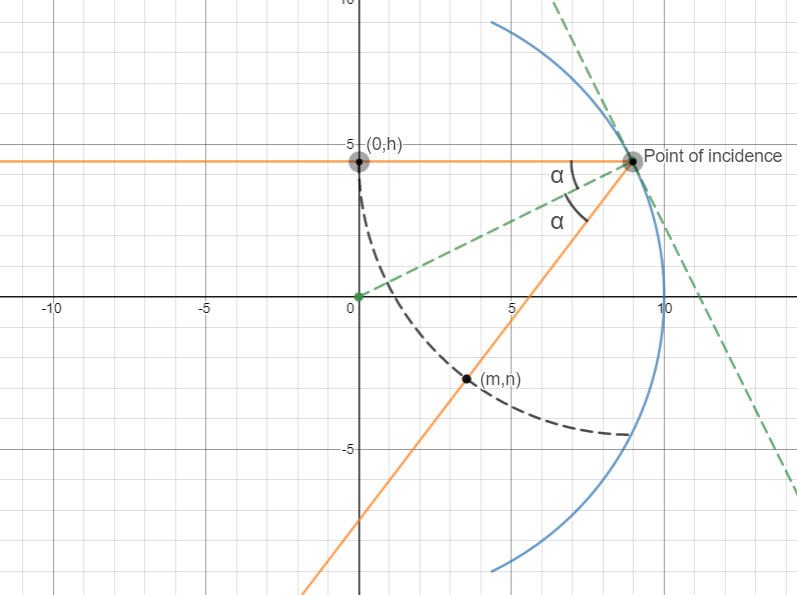 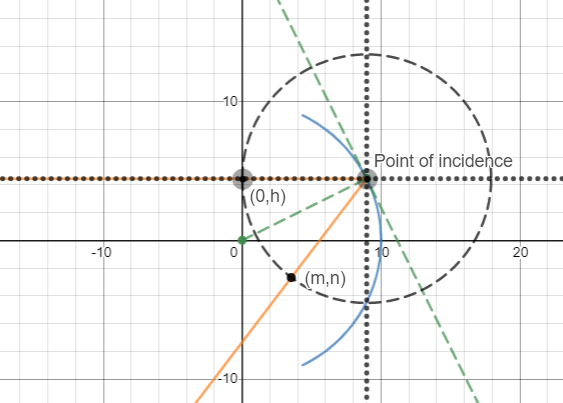 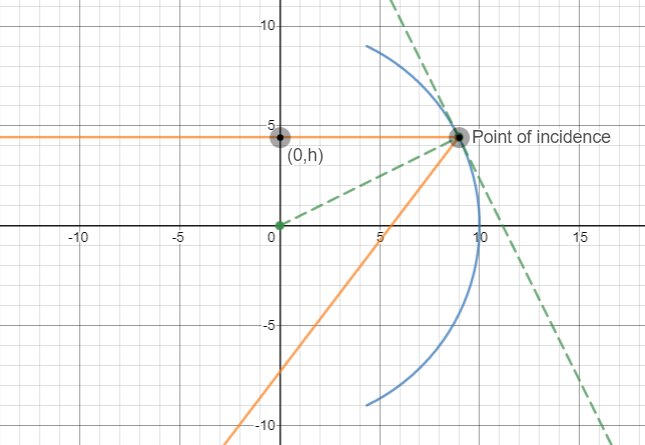 Now, everything seemed fine till I started changing the value of $h$ to see where the reflected ray will intersect the principal axis. The point was not the same every time. In fact, only when $h \rightarrow 0$, the point approached what's supposed to be the focus. In the above diagrams, I have taken $R = 10$, so, the reflected ray should have intersected the principal axis at $(5,0)$. But, there is clearly some deviation.

I thought of visualizing the deviation by comparing my reflected ray with the ray joining the point of incidence and the focus. Here's what it looked like : 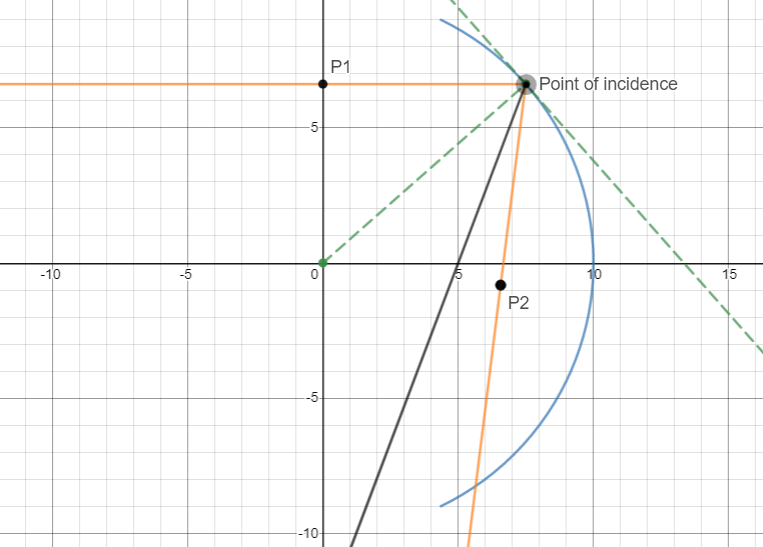 I observed that in my case, the angle of incidence and reflection actually appear to be equal while that is not the case when the reflected ray passes through the focus. I also used the protractor in Desmos to check this.

Now, where did I go wrong? I have recalculated this thrice and I did not find a single error. The only possible error, in my opinion, is that I have assumed that the reflection from a concave mirror happens with the line joining the point of incidence and the centre of curvature as the normal at the point of incidence. On the contrary, I am pretty sure that this assumption is correct.

I would like to know why my reflected ray is not passing through the focus.
Thanks!

PS : Thank You for taking the time to read this question. It took me a long time to write it and so, I was unable to recheck it for errors. So, there might be a few of them and I would be more than happy if you correct them by editing this question or inform me about them, so that I can correct them.
PPS : Here's my graph in Desmos

You have instead used marginal rays in your graphs which are quite far from the principal axis and will thus never converge properly at one fixed point. This can be easily fixed by using parabolic mirrors which will by design obey the above rule.

2
Light Ray Reflection from concave mirror
2
Spherical mirror ray diagram question
1
Why do all rays of light parallel to principal axis of a spherical mirror meet at focus?
1
Lens focusing a collimated beam into a disk of some material. Focus shift due to movement of material?
2
Image Formation by a Spherical Mirror: angle change from $-\theta_2$ to $\theta_2$?
1
What will be the effect on the image formed by a mirascope if spherical mirrors are used instead of parabolic mirrors?