In the center of our milky way, it is assumed that a black hole exists with a mass of $\approx 4\times 10^6$ times our sun's mass. How much light bending (in degrees) would arise for stars that are in perspective near the position of this black hole in the sky?

Could the mass of a black holes become so great that it actually distorts the area in the sky we see around it (through telescopes)? 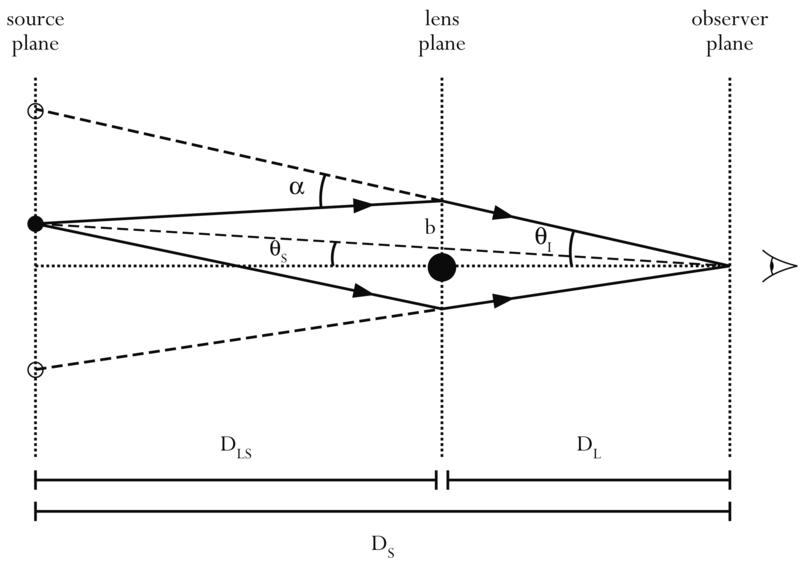 For the position of a source $\vec x$, the propagation of light along the $z$ axis from this source then reduces the visual appearance of the object to $\vec\xi~=~(\xi_x,~\xi_y)$ along the axis of optical propagation. The weak gravitational lensing of light then indicates that the deflection of the appearance of this object along the axis of optical propagation is given by the $$ \Delta{\vec\xi}~=~\nabla\Phi(\xi), $$ for $\xi$ the position of the image with the mass present and $\Phi(\xi)$ the gravitational potential. The difference in the vector position of the image ${\vec\xi}_i~-~{\vec\xi}_s$ is the difference between the position with the mass present and without it being present. The potential term obeys the Poisson equation so that $$ \nabla^2\Phi~=~2\frac{\Sigma(\vec\xi)}{\Sigma_c} $$ The integration over the direction of propagation then gives the mass density in the plane of the image, often called the surface mass density $\Sigma(\vec\xi)$. The angle of deflection $\alpha$ is then determined by the Poisson equation and the potential as $$ {\vec\alpha}ŌĆÖ(\vec\xi)~=~\frac{4G}{c^2}\int\frac{(\vec\xi~-~\vec\xi')\Sigma(\vec\xi')}{|\vec\xi~-~\vec\xi'|^2}d^2\xi', $$ for $\Sigma(\vec\xi)$ a mass/area density distribution in the image. The function $\Sigma(\vec\xi)$ plays the role of an index of refraction based upon a mass distribution, which for a thin lens will give the angle of deviation. For a gravitational thin lens, a weak field that is very small compared to the optical path length, and $\Sigma(\vec\xi)$ is a constant. The deflection angle is simply $$ \alpha(\xi)~=~\frac{4\pi G}{c^2}\frac{\Sigma(\xi) d_{ls}\xi}{d_s} $$ where for small angles $|\vec\xi|~=\xi~=~d_l\theta$ and $$ \alpha(\xi)~=~\frac{4\pi G\Sigma}{c^2}\frac{d_{ls}d_l}{d_s}~=~\frac{\Sigma}{\Sigma_c}\theta $$ for the critical mass density $\Sigma_c~=~(c^2/4\pi G)(d_s/d_{ls}d_l)$. This is the minimal mass density which might be distributed in the area of an Einstein ring.

Famously, stars near the sun are deflected 1.75 arc seconds, as predicted by Einstein.
I calculate that stars on the other side of the galaxy whose light passed very near the galaxy center would be coincidentally be deflected by about the same amount.
If you observe in the submillimeter band you could see it, just as Doeleman sees the black hole itself.
But it would take far more than a lifetime for anything to pass behind the black hole at the center of the galaxy.
The apparent diameter of the Schwarzschild radius is about 40 microarcseconds, or around 10^-10 radians. This is how small you would have to see to detect those stars whose deflection angle is a radian or more.

The apparent radius of the Einstein ring in radians is approximately the square root of this i.e. 10^-5 radians or about 2 arc seconds, very similar to EinsteinŌĆÖs number, but this is just a coincidence.
Look up the Einstein ring formula in wikipedia and you can do a precise calculation if you want.

For a black hole, light is deflected more and more without limit as a beam approaches the hole. There is no theoretical limit to the angle, but there is a practical limit as the images get closer together. 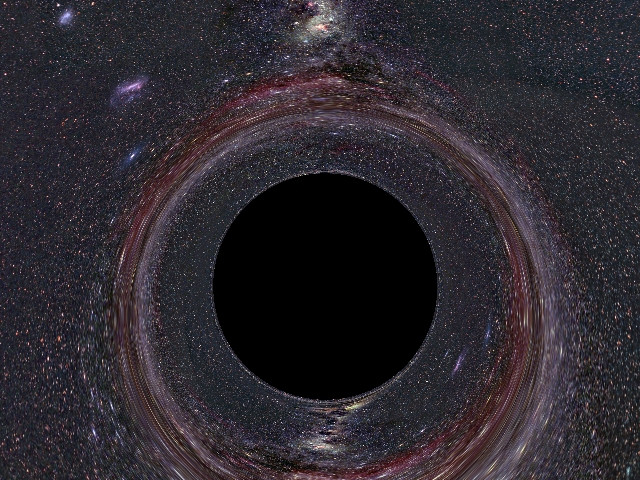 7
Do black holes have a characteristic size?
6
Why are orbits around black holes stable?
1
Problem with black holes?
4
Could there be any alternative to a supermassive black hole that might explain Sgr A*?
4
Why arent black holes bright due to the bent light from nearby stars?
18
Why couldn't they take pictures of a closer black hole?
5
Is there a maximum mass limit for black holes?