Why does a ping pong ball bounce higher when it is dropped together with a cup of water?

Setup: an official ping pong ball is floating inside a party plastic cup filled with clean water, which is then dropped from a certain height onto a soft mat.

Observation: the ping pong ball shoots up to a height which is much higher than its initial position.

Question: why does the ping pong ball do that? Why didn't the water and soft mat absorb the kinetic energy? Is this an inelastic collision? 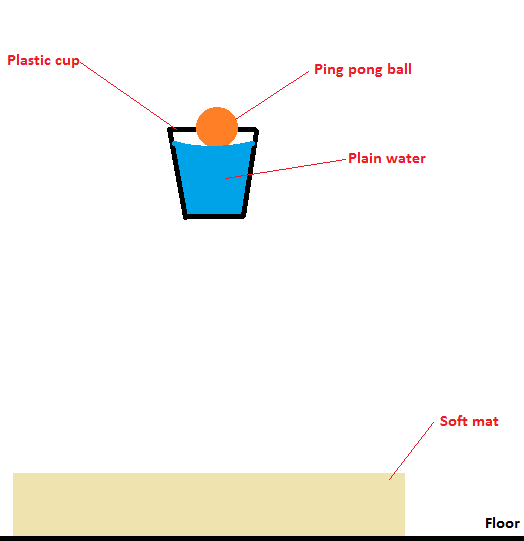 PS: the first time it was an accident, the second time the soft mat and I were thrown out XD

I've confirmed the experiment, using a McD_n_lds paper drinks cup and a beer can hollow plastic ball of about $5\mathrm{g}$, of about the same diameter as a ping pong ball (PPB): 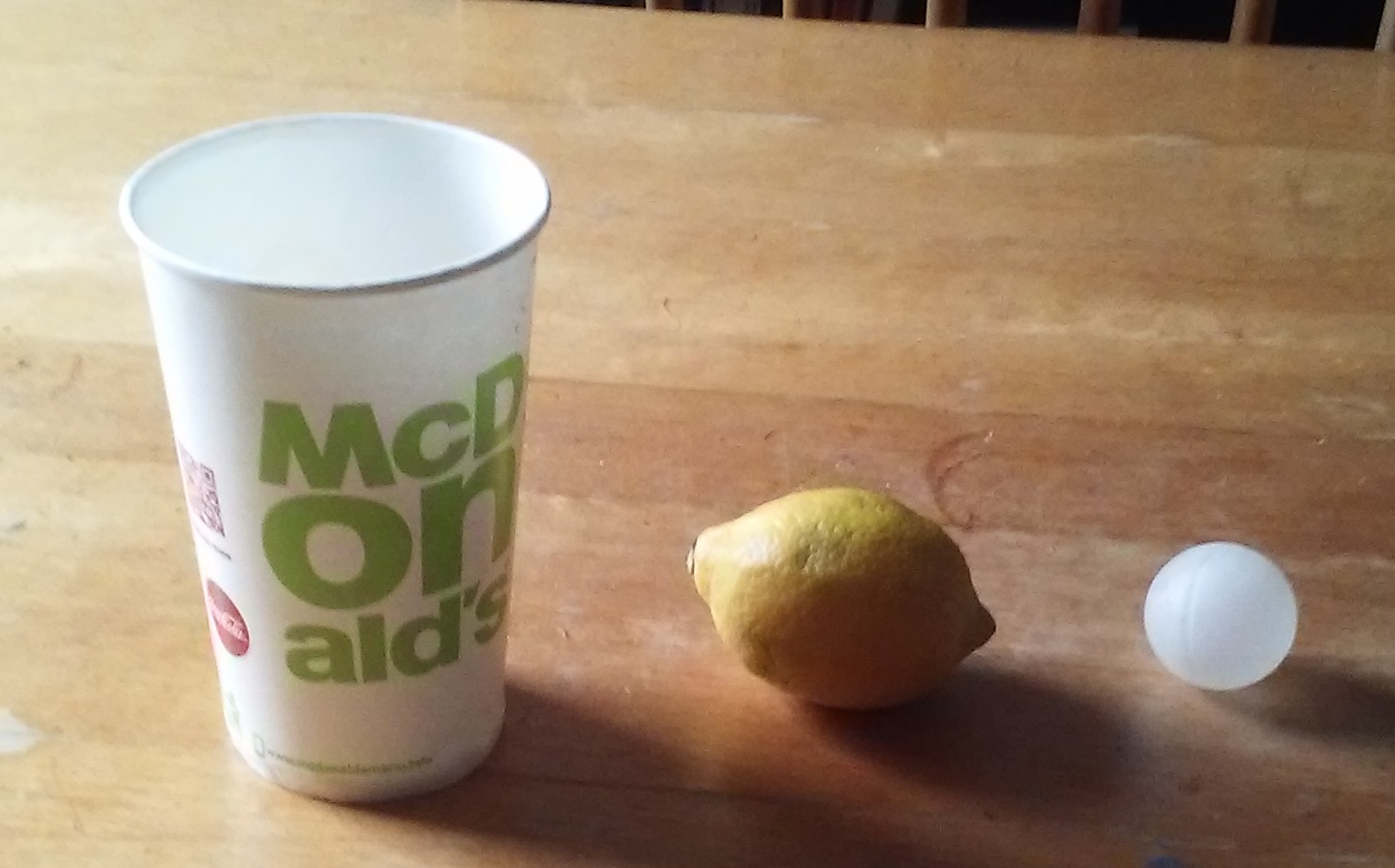 The observed effect depends largely on the cup being soft and permanently deformable (like an object made of blutack or playdough), so its collision with Earth is inelastic. A stiff, hard cup (made of steel e.g.) would not work the same way here. The inelastic collision of the ensemble causes kinetic energy of cup and water, post-collision, to be small.

The PPB bounces back quite high (from a quarter-filled cup) and the cup of water loses quite little water and doesn't really bounce at all. It's quite a sight to behold! A simple model can be set up a follows.

We can write with Conservation of Energy (the collision is clearly not elastic - as evidenced by the permanent deformation of the bottom of the cup):

Trouble is, we don't know the value of $W+\Delta Q+K_{M+m}$. Direct observation suggests it is small, so we can write:

If $M\gg m$ we can further approximate:

I wanted to confirm experimentally the effect of $M$ on $h$.

Using a nearly empty cup, one half-filled and one filled completely I can confirm increased $M$ increases $h$.

Some further experiments are planned.

As compared to the result by @Gert, for $M\gg m$, $h_{max}$ is proportional to $M$ not $M^2$. The latter would contradict the conservation of energy.

Recall that if a ball normally hits a wall elastically, its velocity will be exactly reversed.

Suppose the whole system hits the ground with speed $v$. Now, as the cup and the water hits the soft mat, their speed quickly reduces, and may start moving upward (depending on how soft the mat is) before the ping-pong ball is affected by a reaction force. Suppose the speed of the cup (and the bottom part of water) becomes $u$, along the upwards direction.

Let's go to the cups frame. Now the ball (and the top level of water) is hitting it with speed $u + v$. If the cup were much (actually infinitely) heavier than the ball, the ball would rebound at speed $u + v$ in this frame (the cup acts like a wall). Since the cup itself was moving upward at speed $u$, the upward velocity of the ball in ground frame will be $2 u + v$.

Now in the actual experiment, the collisions are not elastic, the cup's velocity does not change instantaneously, and the cup is not so heavy compared to the ball. So the final upward velocity of the ball be less than $2u + v$, but the above argument shows why it is greater than $v$.

Why Energy Conservation still holds: Since the cup and most of the water does not bounce back to their initial position, their initial potential energy is available to be converted into the extra kinetic energy of the ball, and the energy absorbed by the mat and water.

As mentioned in the comments, this is similar to a Galilean cannon.

My hypothesis why the ping pong ball receives a large upward impulse:

The floating ping pong ball is displacing some water. The amount of displacement does not change much during the fall.

It may even be that there is a secondary effect. It may be that the peak in the force exerted on the wall of the cup causes elastic deformation of the cup wall, and as the cup wall bounces back all of that motion focusses on the central axis of the cup, which is right where the ping pong ball is located.


This suggests a comparison experiment.

Before release water should not be allowed to enter the gap between piston and the cylinder. (During the fall both will be weightless; not much water will penetrate the gap.)

The piston is flat underneath, so there is no opportunity for the water to reflow. I think it is the forced reflow that transmits the impulse to the ping pong ball, so I expect that when reflow is eliminated then the ooportunity for impulse transfer is removed.

Assume that the water in the cup is compressible and inviscid, experiencing one-dimensional flow and thereby satisfying the one-dimensional Euler equations. Initial conditions, velocity =$\sqrt{gh}$ downward and pressure =1 atm, are both uniform. The bottom of the cup is struck from below in such a way that the velocity of the water is reduced and the pressure is increased, similarly to the well-known piston problem. This creates an upward-moving pressure wave inside the water, and produces a pressure gradient in the vertical direction. The pressure gradient creates an upward force on the PPB, instantaneously equal to the submerged volume times the magnitude of the gradient (Archimedes principle). This gives the PPB an initial acceleration, but only for a short period until the PPB leaves the water.

I believe that this has all the makings of a good explanation. but it is terribly hard to put numbers to. Even the decision to include compressibilty needs more justification than I have been able to muster. However, there are times when water at fairly low speeds must be considered compressible. An example is "water hammer" the noise made sometimes by domestic water pipes in response to the sudden closing of a tap. The speeds and decelerations involved might be quite similar.

This is a reaction to the otherwise fine answer of 'Cleonis'.

Here's is his set-up, as I understand it: 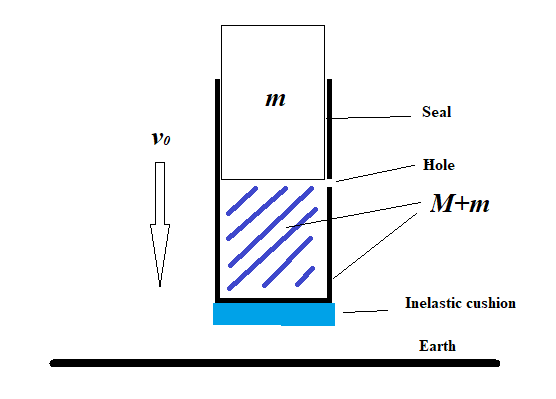 The ensemble of cylinder, water and piston hits the Earth at $v_0$ because:

where $H$ is the drop height.

Due to the soft, inelastic cushion at the bottom of the cylinder, the restitution coefficient is $\text{zero}$ and the energy balance is:

where $\Sigma E$ are various small energies described in my first post.

Note that a hole in the cylinder is needed as otherwise a partial vacuum between the 'escaping' cylinder and piston would arise.

So I believe this to be wrong.

Not the answer you're looking for? Browse other questions tagged newtonian-mechanics energy-conservation collision home-experiment or ask your own question.