When to rely on physical results derived using specific coordinates in GR?

I have been following a course on GR that at one point discusses the metric derived for the outside of a physical, non rotating uncharged massive object with spherical symmetry. For this situation I have seen the Schwarzschild metric derived, in Scharzschild coordinates.

From the form of the metric, it is observed that bad things may happen at $r = 2GM$ and $r = 0$, but this comes with the warning that since the metric is coordinate dependent, one should check the scalar contractions of the Riemann curvature tensor to see if any physical bad things happen. The course proceeds to show that this is the case for $r=0$ but not for $r=2GM$.

Then, light cones are studied by finding out what happens with the geodesic equation for massless particles, in Schwarzschild coordinates, and they appear to close up as $r$ nears $2GM$. This suggests that in these coordinates, light can reach the horizon, but not cross it.

This analysis shows that light can reach into the horizon, but cannot escape the region.

With this introduction and context, my question is how interpret the different analysis of the light cones in these two different coordinate systems. On the one hand, when done in Schwarzschild coordinates, light cones close up and align with the horizon, while in E-F coordinates it is clear that there are geodesics into the horizon, only none that come out.

To be clear, I’m not asking whether light can or cannot enter an horizon formed by a black hole. I’m looking for some clarity on why the analysis in Schwarzschild coordinates cannot be trusted (fully), but apparently the one done in the Eddington-Finkelstein coordinates can.

The whole point of GR is that physics is independent of the specific coordinate system you are using. So if a phenomenon occurs for a certain coordinate system (i.e. the $r = 2GM$ singularity in Schwarzschild coordinates) but does not occur for a different one (i.e. Eddington-Finkelstein coordinates) then chances are it is not a physical effect but rather an artifact of the maths.

This reasoning is similar to removable or essential singularities/poles in complex analysis.

Also, you have to be careful about the "physical interpretation" of the light cones. In that what you are plotting versus what.

The typical Schwarzschild coordinates plot is the following (from here), where the $y$ axis is time $t$ (geometrised constants, $c=1$ etc.) and the $x$ axis is $r$. In this basis, the metric entries $g_{00}$ and $g_{11}$ that control the dot product contributions $\mathrm{d}t^2$ and $\mathrm{d}r^2$ are plotted (below) and you can see that their signs change. This is why some people may say that "time and position" change places past the event horizon. But it's because of the interpretation in this specific coordinate system. 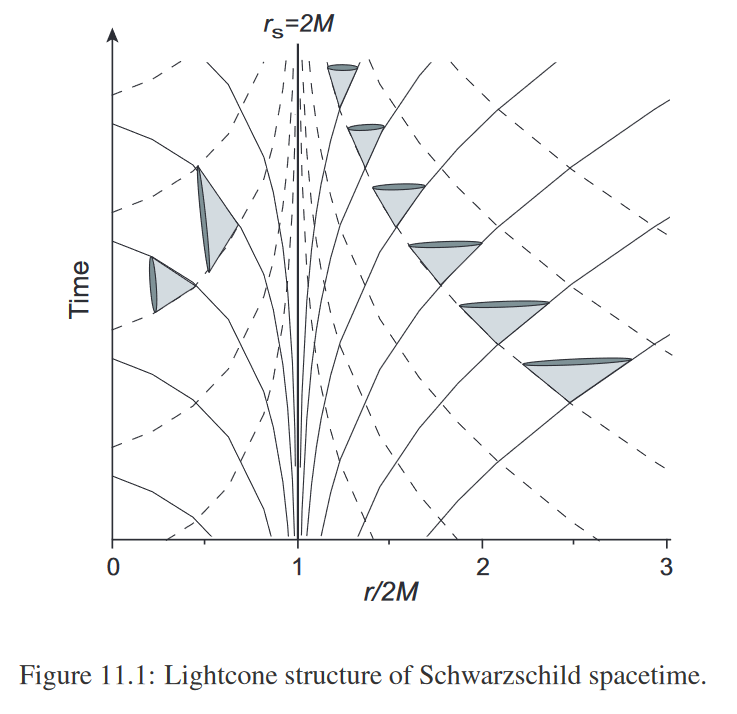 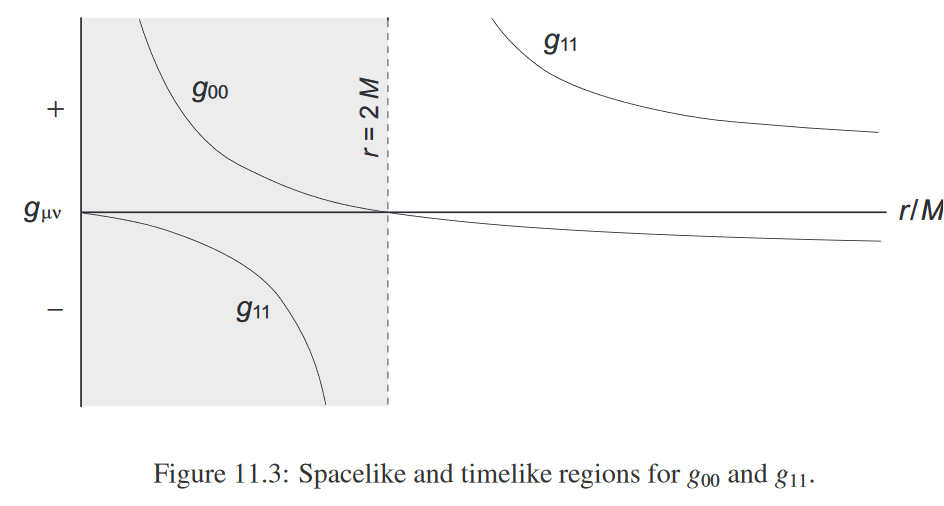 On the other hand, the typical plot in Eddington-Finkelstein coordinates is the following. Note how the axes are now $v-r$ and $r$. $v$ is related to $t$ but it's not exactly the same. 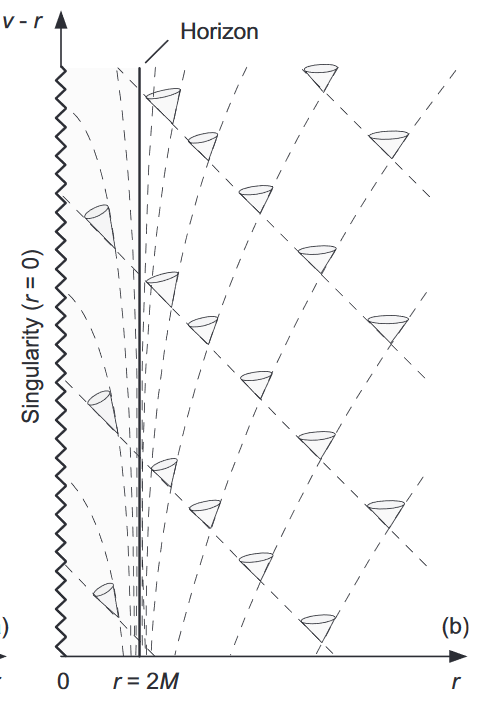 Finally, another set of coordinates usually employed for spherical non-rotating black holes are Kruskal–Szekeres coordinates, $u$ and $v$ (different $v$ from before), shown below. The Kruskal-Szekeres parameterisation is useful as it is the unique maximal extension of Schwarzschild spacetime. Also, they are known as they lend themselves to introducing Einstein-Rosen bridges (wormholes). 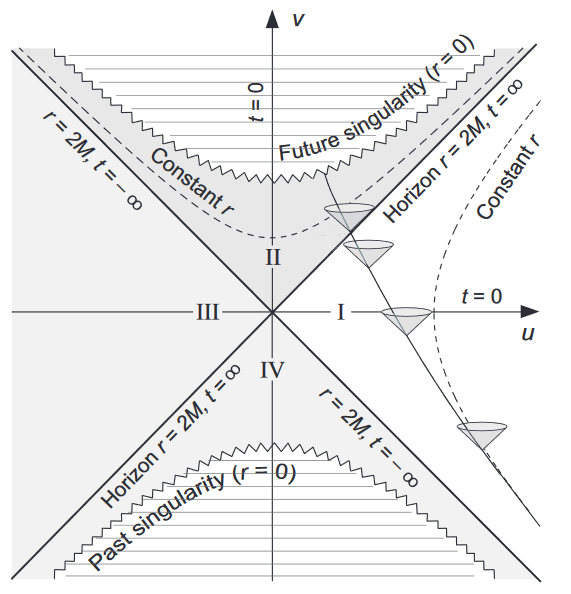 Not the answer you're looking for? Browse other questions tagged general-relativity visible-light black-holes coordinate-systems event-horizon or ask your own question.