Can we think about a particle trapped in a potential well in terms of "quantum measurement"?

Usually, when I'm thinking about a quantum measurement, I see a sort of particle that is being hit by a photon. The more energy the photon carries, the more the momentum of the particle is disturbed, but at the same time the more precise is the measurement of the particle's position.

But recently, I was thinking about a different scenario. Let's say, that our particle is trapped in a finite/infinite potential well of width $d$ (the distance between the walls). Now, if we would move the walls closer to each other (as a result, reducing the distance $d$), the particle would become "more localized". I guess we wouldn't be able to move the walls infinitely close to each other, because it would probably require an infinite amount of energy, but I think in general there is nothing stopping us from bringing them at least just a little bit closer.

What would happen to the momentum of such a particle? Is this even a reasonable scenario to think about in terms of quantum measurement?

The method of measurement has no bearing on the result. The wavefunction for a particle confined at particular position is a delta function, formed from a superposition of momentum states. $$\delta(x)=\frac 1 {2\pi}\int_{-\infty}^{\infty}e^{ixp}dp=\frac 1 {2\pi}\lim_{l\rightarrow\infty}\int_{-l}^{l}e^{ixp}dp=\frac 1 {\pi}\lim_{l\rightarrow\infty} \frac 1 x \sin{lx}. $$ In practice, of course, we do not have a true delta function, because as you rightly point out, there is a bound on energy ($l$ does not go to infinity). We can plot the nascent delta function (finite $l$), in which one observes that short wavelengths (large momenta) are needed for a sharp spike (one usually talks of large energies rather than large momenta, to avoid the connotation of movement; the components of momentum are both positive and negative, cancelling out movement) 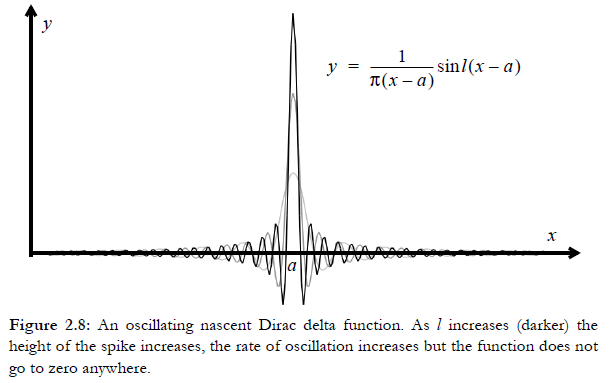 Incidentally, you can also see the reason for quantum tunneling in the diagram, because a wave function composed of a superposition of momentum states does go to zero outside the central region.

Not the answer you're looking for? Browse other questions tagged quantum-mechanics heisenberg-uncertainty-principle measurement-problem or ask your own question.

4
Uncertainty Principle for a Totally Localized Particle
8
Why shouldn't the uncertainty principle be interpreted as an observer effect?
2
Observing a particle over a certain domain
1
What is the relation between uncertainty and information obtained from a measurement?
1
Do photons violate the uncertainty principle, given that they have a constant speed $c$ with no uncertainty?
0
If an electron is in an infinite potential well, would it emmit photon when it bounces off the wall?
0
Why are $E > 0$ particle waves influenced by a Delta-function well potential?