Is the apparent gravitational force on certain parts of a rotating spherical planet off centre?

For a person standing at the equator, if he sees an object in free fall, he will see that the object accelerates downward at the rate $$a = g - \omega^2R$$ where $R$ is the radius of the planet and $\omega$ is the spin angular velocity of the planet. I can't really provide a diagram right now but lets assume that the north-south axis is in the vertical direction. At latitude $\phi$ then an object would go about a circle of radius $R\cos\phi$ with angular velocity $\omega$ and so the "horizontal" (horizontal to the north-south axis, not horizontal to a person on the surface at latitude $\phi$) component of acceleration is $$a_{\text{hor}} = g\cos\phi - \omega^2R\cos\phi$$ while the vertical component remains $$a_{\text{ver}} = -g\sin\phi$$ and so the net force seems to be off centre. So I guess my question is I know that weight seems to increase as we move towards the poles but does the force also slightly go off center when we move away from the equator or did I make some mistake in my analysis?

Look at this image of the earth. 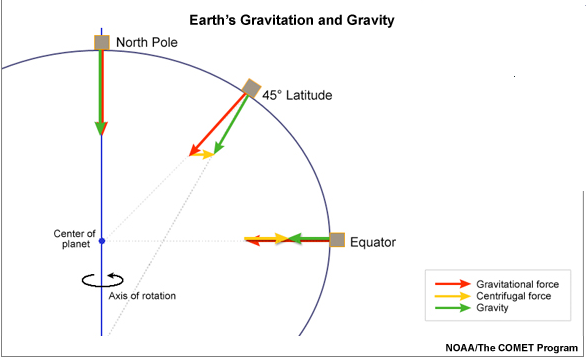 (image from Gravity for Geodesy I: Foundations)

Not the answer you're looking for? Browse other questions tagged newtonian-gravity rotational-dynamics reference-frames planets centrifugal-force or ask your own question.

10
Is there an intuitive explanation for the Southward force caused by the Coriolis Effect on rotating spheres?
9
rotational oblateness
4
How the apparent weight varies due to the rotational motion of Earth?
0
Does a pilot have to take into consideration the angular spin velocity of the earth?
1
Difference between the Coriolis effect and the Eötvös effect
0
Confused about the origin of the Coriolis effect when moving along the equator
0
Deflection of missile due to Coriolis force
3
What is happening with the horizontal component of the Earth's centrifugal acceleration?
4
Which way does a symmetric top precess and why?