Why is the dark matter density profile within the solar radius (and local density) uncertain?

It seems that we know the rotation curve inside the sun's galactic orbit fairly accurately. Then wouldn't we be able to just take the derivative* of this to get the DM density profile at smaller radii? What then is the primary reason we can't distinguish between different profiles like pseudo-isothermal, NFW etc?

*Well, square, multiply by r and take the derivative, but you get the idea

This is not my field, but I think it is as simple as a combination of the things you said - accurately estimating the amount of "normal matter" within the solar radius, accurately measuring the rotation curve (different tracers can give slightly different results), but mainly that dark matter does not dominate the dynamics at small radii.

For instance we know what the mass density is in the local disk by looking at the velocity dispersion of stars perpendicular to the plane (e.g. Kuijken & Gilmore 1989; Creze et al. 1998). These results show that dark matter is hardly present in the disk at the radius of the Sun - the local mass density is entirely accounted for by stars, gas and stellar remnants.

There is no real reason why the (dissipationless) dark matter should be as centrally concentrated as the luminous matter, and that appears to be the case.

Models for the Milky Way dark halo suggest it is distributed with far less "concentration" than the mass in the disk. The scale length parameter of the Navarro-Frenk-White profile is typically found to be $\sim 20$ kpc (e.g. Klypin et al. 2001), whereas the exponential scale length of the disk is more like 3-4 kpc. The plot below shows how various components contribute to the rotation curve. See how dark matter is only dynamically important at large radii, beyond the solar orbit. So I think that even if you have very good measurements it is still difficult to get a handle on the dark matter profile from the rotation curves because it doesn't change the overall rotation curve prediction that much at small radii. 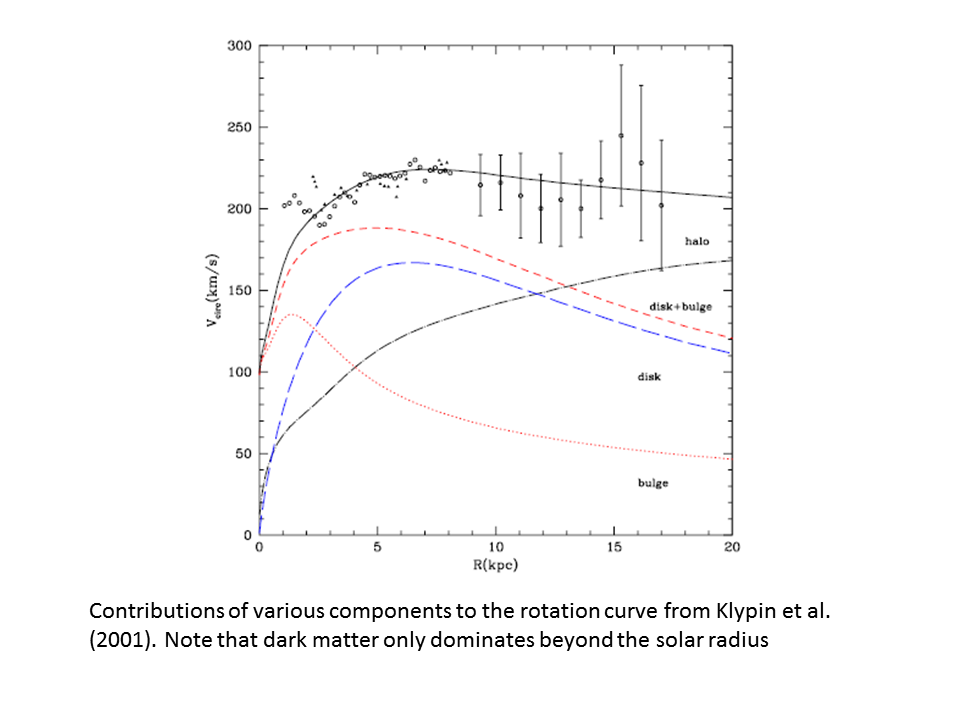 We might expect the density of dark matter in the Solar system to be higher than the average over the whole universe, but not by anything approach a factor of 10$^{21}$. On the scale of the Solar System the effect of the dark matter is entirely negligable. It's only when you get to interstellar distances that it starts becoming significant.

We know the relative velocity w.r.t. to the Sun inside the solar radius, and could get from there the rotation curve if we knew the rotation velocity of the Sun (or of the Local Standard of Rest) in the Galaxy, and the distance of the Sun from the Galactic center. We dont know that distance very precisely ($8\,\text{kpc} \pm 1.5\,\text{kpc}$), and we dont know the velocity of the Sun w.r.t. to the Galactic center at all ($230 \,\frac{\text{km}}{\text{s}} \pm 50 \,\frac{\text{km}}{\text{s}}$).

Not the answer you're looking for? Browse other questions tagged astrophysics dark-matter observational-astronomy galaxy-rotation-curve or ask your own question.