Is the Poynting vector in a DC circuit mathematically correct, but representing potential energy and not the delivery of energy?

There are magnetic and electric fields outside the DC circuit wire. The fields are static and separate. Energy is stored in the fields. There is a low amount surface charges, and to detect the surface charges requires high voltages. The magnetic fields can be used for application. If the circuit is in a vacuum then neither field is being used and the energy is potential.

The current inside the wire is delivering the energy to the resistor. Interaction between the current electrons and the resistor results in the transfer of energy.

The surface electrons result from partially blocking the current with resistance. The surface charges provide feedback to regulate the current and a local electric field through the resistor. The magnetic field results from the forward progress of the current electrons.

This is the problem I find with the Poynting vector in DC circuits:

This is, I think, the problem. The Poynting vector is mathematically correct, but not properly related to the entire circuit.

A wide carbon resistor has surface charges at the interface between the wire and resistor. The cross product of the Poynting vector appears to be zero. But, there is now a clear mechanism of energy transfer. 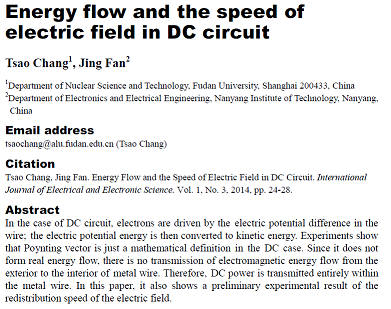 Cite describing the depth of the Poynting vector:

In Poynting’s theorem the amount of energy in the fields at any point is given by $u$ and the work done on matter at any point is $\vec E \cdot \vec J$. Both of those quantities deal with energy at a given point, either energy in the field or energy leaving the field as work on matter. The Poynting vector is the only term that represents the movement of energy through the fields from one point to another. It does not even have the right units to represent a storage of potential energy. It is a flow of energy.

The current inside the wire is delivering the energy to the resistor. Interaction between the current electrons and the resistor results in the transfer of energy.

This is correct but incomplete. The $\vec E \cdot \vec J$ term does result in the transfer of energy from the EM fields to matter, but it does not provide a movement of energy from one location to another. In particular, like $u$, it is a scalar not a vector, so it cannot define a direction for energy to flow. So the question arises, where does that energy come from. That is the role of the Poynting vector. In Poynting’s theorem it is the only term that is both a vector and has the right units for energy flow.

Edit responding to your newly posted references and comments:

Note that your first reference is from a known predatory publisher AASCIT. You should be highly skeptical of anything found in such journals. They do not actually do peer-review. They simply publish anything submitted, provided the author pays their publication fee. Their business model is based on deception and preys on unsuspecting young researchers and unsuspecting readers, both of whom are tricked into believing that their peer review process is real. In any case, Maxwell's equations trump this article, and Poynting's theorem follows directly from Maxwell's equations.

The reason that this paper was published in a predatory journal instead of a real peer-reviewed journal is that the analysis of their experimental setup is vastly insufficient for supporting their claim. Extraordinary claims require extraordinary evidence. When you seek to experimentally disprove a theory you MUST calculate the exact prediction of the theory for your experimental setup according to the rules of that theory. Such a calculation using the Poynting vector for his "shielded" setup was not even attempted. Without that calculation it is impossible to compare the experimental results to the Poynting vector's theoretical prediction in order to assert a failure of the theory. There is simply no way to make their conclusion based on their analysis.

Your second reference agrees with what I have been describing. Additionally, here is another reference that I like, which quantitatively shows the flow of energy in a coaxial cable: Manoj K. Harbola, "Energy flow from a battery to other circuit elements: Role of surface charges" American Journal of Physics 78, 1203 (2010). Note in particular figures 4, 5, and 6 showing respectively the E-field, the direction of the Poynting vector, and the magnitude of the longitudinal component of the Poynting vector. Figure 6 directly supports your second reference which qualitatively found "that electromagnetic energy flows ... mainly in the vicinity of the wires (and not inside them)".

Regarding the electric field in the wire. In an ideal conductor it is identically 0, and it increases as the resistance of the conductor increases. An increased conductor resistance is associated with increased energy dissipation and reduced energy transmission. So it is immediately clear without even looking at Poynting's theorem that the E-field inside the wire is not associated with energy transfer through the wire but rather with energy dissipation in the wire.

If we use Poynting's theorem inside the wire we gain further insight: the direction of this E-field is longitudinally along the wire, and the magnetic field is circumferential even inside the wire. This results, per Poynting's theorem, in an energy flux into the wire, not along the wire. This energy flux is exactly equal to the $\vec E \cdot \vec J$ energy dissipation in the wire.

Think of momentum conservation. Joule effect in a resistor means infrared radiation emmited to the surroundings.

That EM radiation has a momentum, proportional to its Poynting vector. For a typical cylindrical resistor, that vector comes from it in a cylindrical symmetry.

But if we think only of electrons being scattering by the nucleous as a source for the Joule effect and radiation, the change of momentum should be in the wire direction. How a EM wave with a diretion of propagation (and momentum) transversal to the wire could be generated?

The fact is that we can not think of movement of charges forgetting the fields that are involved in this movements. Otherwise momentum for example is not conserved.

From the fields perspective, there is a flow of energy (and momentum) to the wire/resistor proportional to $\mathbf E \times \mathbf B$ during the flow of current.

And there is a flow of momentum from the wire/resistor in the form of EM infrared radiation so that the total momentum is conserved.

Not the answer you're looking for? Browse other questions tagged electromagnetism electric-fields poynting-vector or ask your own question.