The induced emf in a coil in AC generator is given as:

Now, when the angle between the normal of plane and magnetic field is zero degrees, the induced emf is zero i.e.

But we also define emf as the time rate of change of magnetic flux so, why do we get zero emf in the above case, magnetic flux is still changing with time?

Muhammad Rafique the induced EMF in a AC generator also depend's on the rate change of magnetic flux linked with the coil, that is $\Delta\phi =\phi(f)$ - $\phi(i)$ and rate change of magnetic flux $\frac{\Delta\phi}{\Delta(t)}$ = $\frac{BASin(\theta(f)- \theta(i))}{\Delta(t)}$ so it can go zero for some values of $\theta$ but we are taking an average value in this case but the induced $EMF$ in an AC generator which generate alternating current which mean's it change's it's value from positive to negative in which it also become's zero we cannot take an average value for a complete cycle because it will result in zero EMF so we take the average for a half cycle. Hope it cleared your doubt if not you can notify me

Armature: Number of coils is wounded on a cylindrical core, called armature.

Coil: It is a rectangular in shape and capable to rotate about its axis in magnetic field.

Magnetic poles: There are two north and south poles to create a uniform magnetic field in a region where coil rotates.

Slip rings: There are two circular rings each of one is associated with one of the terminal of coil. They slide against carbon brushes.

Carbon brushes: They are used to carry current from coil to external circuit.

Current from a generator: When agenerator is connected in a closed circuit, the induced e.m.f generates an electric current. As the loops rotates, the strength of the current changes as shown in graph.

Current is maximum when θ=90°, the plane of loop is parallel to magnetic field.

Current is minimum when θ=180°, the plane of loop is again perpendicular to magnetic field.

Current is maximum (negative) when θ=270°, the plane of loop is parallel to magnetic field. i.e. direction of current reverse.

Current is minimum when θ=360°, the plane of loop is perpendicular to magnetic field.

It should be noted that the current increases twice in a cycle but in opposite direction. The current and e.m.f changes smoothly from zero to maximum value and back to zero during each half turn of the loop.

Not sure if this helps any future readers or not, but it helped me a lot. http://macao.communications.museum/eng/exhibition/secondfloor/moreinfo/2_4_1_ACGenerator.html 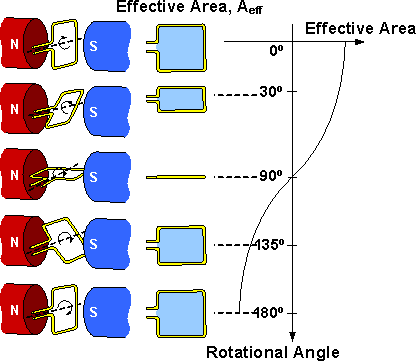 The graph shows how the area of the coil changed over time with respect to the angle of rotation. When the area is at 0, the gradient is steepest. Emf is directly proportional to the rate if change in flux, the field is constant, therefore the flux is proportional to the change in area. So at the moment when the coil's velocity is perpendicular to the field, the rate of change in flux is at a maximum and when the velocity is parallel the derivative is at a minimum.

BlakeBlake
1
$\endgroup$
Add a comment  |
Highly active question. Earn 10 reputation (not counting the association bonus) in order to answer this question. The reputation requirement helps protect this question from spam and non-answer activity.

4
Rotational speed of a coil in a uniform magnetic field at equilibrium
1
Negative emf in AC generator
0
How is this the graph of induced emf against angle for a rotating coil in a magnetic field?
0
The trouble with EMF induced in the coil of wire
2
How doI find the average induced emf in a coil given the rate of change of flux density, and the area of the coil?
3
Average induced emf in a rotating coil after rotating by 180 degrees
1
Why is the graph for induced emf againt angle a sine graph for an ac generator?
0
Magnetic flux inducing EMF
1
Calculating the accurate emf of an electric generator
0
Will there be any induced EMF?