Doubt regarding grounding of a sphere and charge distribution [closed]

An insulated sphere with dielectric constant $K$ (where  $K>1$) of radius of $R$ is having a total charge $+Q$ uniformly distributed in the volume. It is kept inside a metallic sphere of inner radius $2R$ and outer radius $3R$. Whole system is kept inside a metallic shell of radius $4R$, metallic sphere is earthed as shown in the figure. Spherical shell of radius $4R$ is given a charge $+Q$. Consider $E-r$ graph for $r > 0$ only. 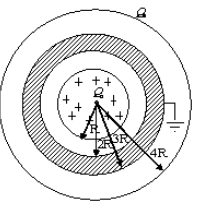 Well I started working out on this by considering $-Q$ charge induced on the inner side of the metallic sphere (since by application of Gauss theorem the electric field inside a conductor should be null) and proceeded by considering unknown charge $q$ on the outer side of the sphere where it is grounded (or so I understood). by taking potential zero I calculated $q= -3Q/4$ but I believe I must have gone wrong somewhere

(Edit: originally I neglected the shell at $r = 4R$ completely, thank you to Urb for pointing this out. Since fields superimpose, we can add the effect of this shell to what has already been calculated.)

Now, what happens if we add the charged shell at $r = 4R$? The positive charge will draw negative charge from the Earth and it will collect on the outer surface. The amount of charge drawn will now depend on the radii of the spheres, in contrast to the situation at the inner surface, which will always carry charge $-Q$ no matter the radii of the insulator or the conductor. One way to see why this is, is that if the inner radius of the grounded sphere got bigger, the negative charge pulled to the inner surface would get smaller because it is now further away from the positive charge on the insulator, but the total surface area that collects this charge gets bigger, so overall the total charge that collects at the surface will be the same (field drops as $1/r^2$, but the surface area grows as $r^2$, so the radius dependence cancels). By contrast, at the outer surface of the grounded sphere, if its radius got smaller, now not only does the negative charge drawn by the positively charged outer sphere get smaller because they are now separated by a greater distance, the surface area it collects on gets smaller too, so the total charge that collects on the outer surface will depend on the radii of the spheres.

So, how much charge collects at the outer surface of the grounded sphere? The insulator and the charge at the inner surface we can completely neglect from now on, because effectively the grounded insulator isolates us from whatever charge there was there. First let's consider only the outer charged shell. The potential at $r = 4R$, which I'll call $\phi_0$ is:

For $r < 4R$, considering only the charged outer shell, the potential will satisfy Laplace's equation $\nabla^2 \phi = 0$ since there is no enclosed charge. By the uniqueness theorem, the potential due only to the outer charged shell will therefore be $\phi_0$ throughout the interior $r<4R$. So this is the contribution to the potential from the outer charged shell. Now putting back the grounded conductor, in the grounded conductor, we must have $\phi = 0$. The field contribution at $r=3R$ from the outer shell is $\phi_0$ as we now from above. So, the potential from the negative charge that collects at this outer surface, which I'll call $q$, must contribute exactly $-\phi_0$ in order to cancel and be zero. Thus, at $r=3R$, we must have:

I hope this clarifies the issue, but I appreciate that it is hard to follow. The key points are this:

These five points will, I believe, answer all of your questions/doubts.

(In a previous edit I mentioned Paul Falstad's applets at https://www.falstad.com/emstatic/; I'll leave the reference here because they can be useful.)