What is the difference between a force and a net force?

"Net force" simply means the sum of all forces. The "unless acted upon by a net force" version is more correct. For example, as you stand or sit still, the earth pushes you up with a force equal and opposite to the force with which gravity pulls you down. The net force, or total force, is zero, so you do not move.

The wordings of Newton's laws differ, although the math stays the same.

A "net force" is an English phrasing for the sum of all forces. Intuitively, if I push on a wood block on one side with 100N, you push on the block from the other side with a force of 100N, the block isn't going to go anywhere. While there are multiple 100N forces being applied, the sum of the forces (or the "net force" on the block) is zero, so it remains at rest.

The terms are not actually interchangeable. Mathematically, one is $F_i$ and the other is $\sum_{i=0}^N F_i$. However, we are talking about communicating in English. In many cases, people will assume that the word "net" can be implied, and will omit it. This is especially true in simple textbook examples where there may be only one force acting on the body.

Here is a scenario: A rolling cart with some forces acting along its direction of motion. Now consider the following situations

So the more general term the describes the situation is net force and only when there is one force acting the two wordings are equivalent.

It means the same thing, but is worded more precisely.

The difference becomes clearer when you consider two forces that are applied to the object at the same time - in the less precise wording, of course there would be an acceleration, because there is a force (and another one for the second force). What really happens is that the (vectorial) sum of the two forces - the net force - decides if there will be an acceleration.

The term net force clarifies that you need to add up all forces (if more than one), and if there is a sum = net force, an acceleration will happen.

Besides the answers already given, you can think of Newton's first law as a special case of Newtons second law. For Newton's second law the "force" is explicitly stated as a "net force", or

Assuming constant mass, if the net external force acting on an object is zero, then the acceleration of the object is also zero, i.e., the object will either be at rest or moving at constant velocity with respect to an observer in any inertial frame per Newton's first law.

[...] whilst for other articles, it states "unless acted upon by a net force."

The latter is really the correct expression, the former really being a 'lazyism'.

Consider the following body, subject to three forces as an example: 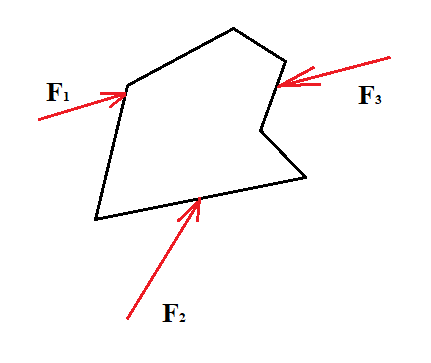 The individual forces, in that sense, don't matter, only the so-called resultant force matters.

Force is a vector quantity. The first law talks of a single object and a force, without going in the details.

A net force means a vector addition of forces, two equal and opposite forces add up to zero net force . This is expressed more clearly here.

6
What in Newton's three laws of motion is original and not a paraphrasing of his predecessors?
0
Which part of an angular velocity vector is its direction?
2
Does Newton's First Law depend on the object having mass?
1
Can the motion of an object in the absence of external forces be different than that of an object with zero net force?
3
Is Newton's first law an "If and only if"
3
How to determine component forces when net force is known?
1
Newton's 1st law, applied in a manifold
18
How is Newton's first law of motion different from Galileo's law of inertia? If the two are the same, then why is the first law named after Newton?