Why does the current through an Inductor changes when the Inductor doesn't like the change of flux through it? 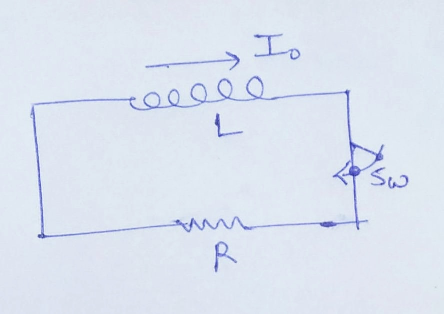 Consider the example shown above. Here we have connected an active inductor, in which the initial current is "I", to a resistance, with the help of a switch and close the switch at t=0. We know and it is given in almost all the textbooks that the current and magnetic flux through the inductor will slowly decay in this case to zero.

We also know from Faraday's Law of EMI that nature doesn't like the time variation of magnetic flux at any point in space. To maintain the same flux in the inductor, with the help of non-conservative induced electric field, it induces such a current into itself such that the uniformity of flux can be maintained.

Now the question comes is if the tendency of an inductor is to maintain the same amount of flux through itself, then the flux through it should not change at all and it should remain the same till eternity, independent of the fact that it is connected to a resistance, but mathematically and also from energy conservation point of view, we know that the current decays! and the magnetic flux also decays to zero!

So, the question is, how does it happen? Where does the tendency of an inductor to maintain the same flux go in this case? Can somebody help me with a microscopic explanation that how the current and magnetic flux change in the above circuit? and why do they change?

I am not expecting a mathematical or energy-conservation-related argument as answers to my question.

I am expecting microscopic explanation in the circuit (i.e. what exactly happening inside the wires and resistance) and an intuitive explanation to understand the phenomena.

Objects with mass tend to resist (due to inertia) changes in their velocity. But that doesn't mean that nothing ever experiences acceleration. It's the same story here.

In your example, the stored magnetic energy in the inductor must be dissipated as heat in the resistor in order for the inductor current to change.

I am not expecting a mathematical or energy-conservation-related argument as answers to my question.

I am expecting microscopic explanation in the circuit (i.e. what exactly happening inside the wires and resistance) and an intuitive explanation to understand the phenomena.

When the current changes so does the magnetic flux linked with the inductor, an emf is induced which produces a current in opposition to the changing current producing it - Faraday and Lenz.

First, here's an example of a circuit that works as you describe. 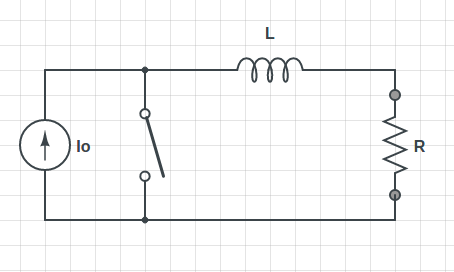 We say that the switch has been open a long time which is to say that, before the switch closes at $t=0$, the circuit is in DC steady state (all voltages and currents are constant in time).

The instant after the switch closes, the current through the inductor is still $I_0$ but now, the voltage across the inductor (left-most terminal marked with the $+$ symbol) is

This is just KVL; the voltage across the closed (ideal) switch is zero (by definition) and so the sum of the voltages across the inductor and resistor must be zero.

As an aside, when the inductor is made of non-ideal conductor with non-zero resistance, there is actually some electric field inside the conductor consistent with (microscopic) Ohm's law $\vec j = \sigma \vec E$. In this case, the inductor emf cannot precisely cancel the applied electric field within the conductor. However, we can model this with an ideal inductor in series with an ideal resistor $r_L$ to represent the non-zero resistance of the inductor windings. The terminal voltage of the inductor is then higher than the induced emf due to the additional voltage drop across $r_L$.

1
Does the heat produced in an inductor affected by the total current in the resistance in the circuit?
0
Why do inductors maintain the exact same current?
0
Rate of change of current in an Inductor
0
Changing the flux through a coil by changing the current through it
0
How does current vary with time through a motor?
1
How is the rate of current change in an inductor present in a circuit maintained / decreased?
2
Does an inductor stretch or compress when a current is passed through it?
0
Inductance and the current through the inductor
5
Where does the energy stored in inductor go on opening the switch?