I'm watching this minutephysics video on Lorentz transformations (part starting from 2:13 and ending at 4:10). In my spacetime diagram, my worldline will be along the $ct$ axis and the worldline of an observer moving relative to me will be at some angle w.r.t. the $y$ axis.

When we switch to the other observer's spacetime diagram, the observer's worldline will be along the $y$ axis and my worldline would flip over to the other side, but the angle between the worldlines would be preserved. Then the video goes on to mention three possibilities: 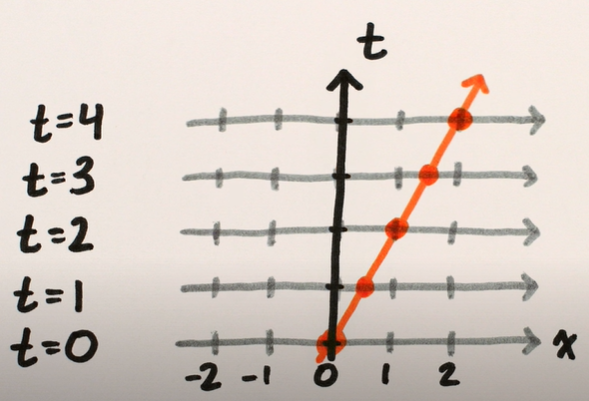 where $M$ is the metric we're assuming for the space. Seems like (though I'm not a 100% sure) the $T>4$ possibility corresponds to rotation (Euclidean, sure about this one), $T=4$ to Galilean boost (Galilean) and $T<4$ to Lorentz boost (Minkowski metric).

Edit: Specifically a mathematical argument/proof of why Euclidean, Galilean and Lorentz must be the only linear angle-preserving transformations in flat geometry.

8
Why does Minkowski space provide an accurate description of flat spacetime?

3
Galilean transformation in relativity
20
Motivation for preservation of spacetime volume by Lorentz transformation?
2
Does Galilean relativity constitute a dynamical symmetry or an isometry?
1
Derivation of Lorentz boosts
1
When constructing a general Lorentz boost using an $x$-axis boost, what is the second rotation in relation ro the first rotation?
0
Understanding proper-time as "evenly spaced gradations" on the worldline?