Ask Question
Asked 1 year, 5 months ago
Active 3 months ago
Viewed 805 times
-1
$\begingroup$
Closed. This question is off-topic. It is not currently accepting answers.

Original close reason(s) were not resolved 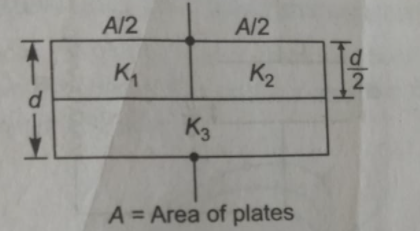 What I did was prove that the electric fields in K1 and K2 are having the same E fields inside them(as shown in the image ). I then concluded that since the fields are uniform, constant and the distance which the dielectrics k1 and k2 occupies are the same, the potential drop across them should be the same. Related 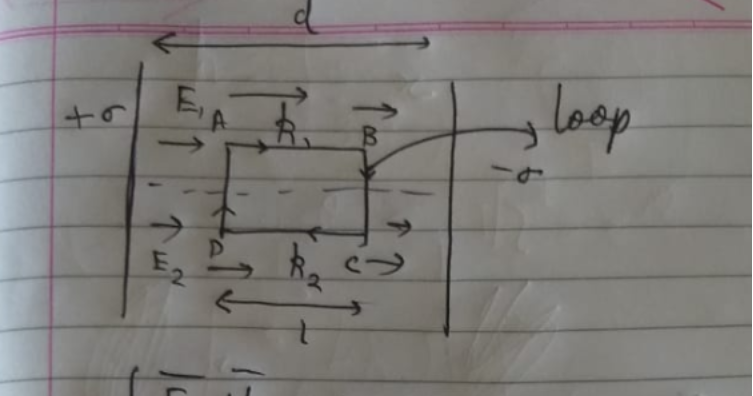 I hence concluded that Slabs k1 and k2 are in parallel and their equivalent would be in series with slab k3 and got the following answer (which is incorrect acc. soltn key).

The correct answer given is obtained when we take the slabs k1 and k2 each to be in series with half of k3 each and then taken in parallel.

Let the three capacitances in your proposed connection be $C_1$, $C_2$, and $2C_3$. The equivalent capacitance is then

Now, think about what happens when, say, $k_1$ is made much, much greater than $k_2$ and $k_3$. The equivalent capacitance would go to

This doesn't pass the sanity check. It doesn't seem plausible that making $k_1$ arbitrarily large should negate the effect of the $k_2$ slab entirely.

and the limit of arbitrarily large $k_1$ is

This does pass the sanity check. Only if $k_2$ is also made arbitrarily large does the equivalent capacitance approach $2C_3$.

So where has your thinking gone wrong? If the connection you propose is valid, then we can insert an ideal conductor plate at the interface of the $k_3$ dielectric with the others without changing the system. But I'm almost certain that's not the case.

Not the answer you're looking for? Browse other questions tagged electrostatics capacitance polarization dielectric or ask your own question.