Justification of the energy and momentum operators in quantum mechanics [duplicate]

Ask Question
Asked 1 month ago
Active 7 days ago
Viewed 303 times
6
$\begingroup$
This question already has an answer here:
How to derive or justify the expressions of momentum operator and energy operator? (1 answer)
Closed last month.

There is one thing that always troubled me in quantum mechanics, how do you justify the expression of the energy and momentum operators, namely $\hat{E} = i\hbar\frac{\partial}{\partial t}$ and $\mathbf{\hat{p}} = -i \hbar \mathbf{\nabla}$?

The only justifications I've seen were always the same: take a plane wave function with a certain frequency / wave vector, inject Planck's / De-Broglie's relation to convert to energy / momentum, time differentiate / take the gradient, and associate what comes out.

But a plane wave is only one particular wavefunction (not even physical), how can you infer anything general about wavefunctions starting from properties of particular solutions?

Is there any more fundamental justification?

This was closed and tagged duplicate but the associated question doesn't answer the question. Although it has a very similar title, it is actually asking about some sort of force operator. (Only a link is given in an answer, but it refers to the demonstration I gave.) Please check this before closing ! :(

I also checked other related questions but none cover the subject as it has started to be here.

Another way to look at it (but not necessarily more "fundamental") is to see that the translation operator of a localised particle $\left|x\right>$ can be expressed as a Taylor series operator:

The simplest nontrivial operator that satisfies this is $\hat{p}_x \propto \frac{d}{dx}$. Also see here for a related explanation as to why higher-derivative theories are not common in QM and QFT.

Moreover, we require that $\hat{p}_x$ has appropriate units, so it must be proportional to the experimentally measured constant $\hbar$. Finally we want $\hat{p}_x$ to be Hermitian, since we want it to correspond to a real physical observable. Since the operator $\frac{d}{dx}$ is anti-Hermitian, we have to introduce a complex factor $-i$, which means that the simplest Hermitian operator with appropriate units that commutes with the translation operator and is not just a c-number (as in classical mechanics) is:

First, an important note - $i\hbar\frac{\partial}{\partial t}$ is not the energy operator. It is not an operator at all. Remember that an operator acts on elements of the Hilbert space, such as $L^2(\mathbb R)$; time derivatives do not act on these functions. See my answer here.

The most fundamental justification I know has to do with symmetry groups. To be clear, this is not the historical approach taken by Schrödinger, et al in the 1920's. As pioneers into a new frontier of physics, their work was guided by intuition, heuristic arguments, and presumably no shortage of trial and error. However, we have the luxury of seeing the subject through a modern lens; doing so reveals a beautiful structure which underlies both classical and quantum theory, so that's the approach I will take here.

The non-relativistic spacetime symmetry group consists of translations, rotations, and Galilean boosts; those are the operations under which Newtonian physics is invariant. In the Hamiltonian formulation of mechanics, these symmetry transformations are manifested as flows through phase space, which are generated by observables. Briefly, one starts with an observable $F$ which is a smooth function of your $x$'s and $p$'s. As an example, I've plotted the Hamiltonian function for the standard pendulum below. 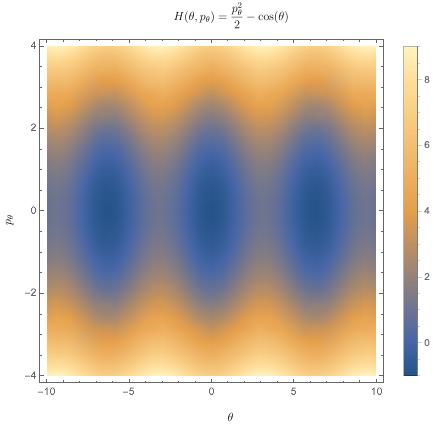 Each smooth function $F(x,p)$ induces a Hamiltonian vector field $\mathbf X_F$ given by

For the Hamiltonian plotted above, that looks like this: 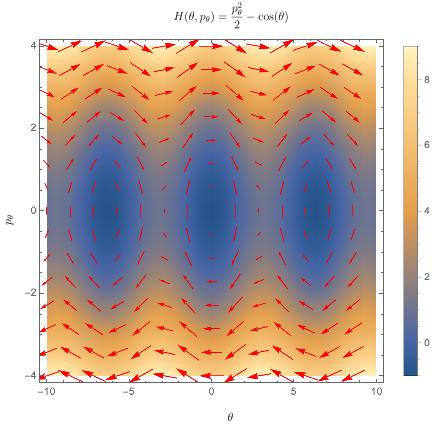 From here, we can define a flow by "connecting" the arrows of the vector field, creating streamlines: 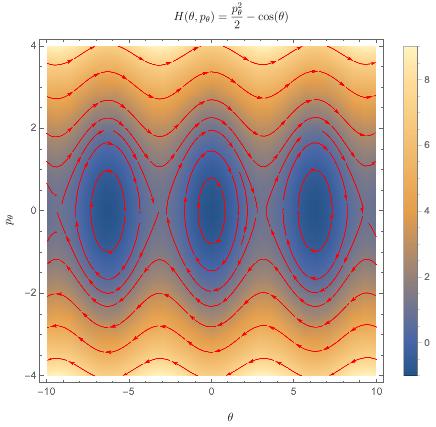 The flow $\Phi_F$ generated by $F$ is the map which takes phase space points and pushes them along their respective streamlines, as shown here. Note: this is an animated GIF, and you may need to click on it.

This reveals the underlying structure of classical mechanics. The flow generated by the momentum function causes a constant shift in the corresponding position; $\{x,p\} = 1$, so following the flow a distance $\lambda$ simply causes $x\rightarrow x+\lambda$. Thus, we say that momentum is the generator of spatial translations. In the same way, the Hamiltonian is the generator of time translations - the flow generated by the Hamiltonian is simply identified with time evolution.

The canonical formulation of quantum mechanics is ostensibly completely different than Hamiltonian mechanics. In the latter, a state corresponds to a point in phase space; in the former, a state is (more or less) an element of some underlying Hilbert space, such as $L^2(\mathbb R)$. Observables in Hamiltonian mechanics correspond to smooth functions on phase space, while observables in quantum mechanics correspond to self-adjoint operators.

As stated above, momentum is the generator of spatial translations; the flow generated by $p$ serves to shift $x$ by some constant amount. We might guess, then, that the unitary operator generated by $\hat p$ corresponds to the same thing in quantum mechanics.

Explicitly, to go from a self-adjoint operator to the corresponding unitary operator, we exponentiate; it therefore follows that we would expect the (unitary) translation operator to take the form$^\dagger$

Note also that with this identification, we see that the Poisson bracket is "deformed"$^{\dagger\dagger}$ into the quantum mechanical commutator bracket:

We can repeat the procedure for the other observables, noting each time that the structure from Hamiltonian mechanics is preserved. It's not the same as classical physics, but it certainly rhymes.

$^{\dagger}$ I'm leaving out factors of $\hbar$ because they get in the way of the structure I'm trying to illustrate, but you're free to replace of the $\hat p$'s with $\hat p/\hbar$ if you'd like.

$^{\dagger\dagger}$ For more information on the translation of Poisson brackets to commutator brackets, you might google the phrase deformation quantization.

I will restrict my answer to the 1-dimensional momentum operator, which is enough to understand what is going on.

The momentum operator you have written has the following form in 1D:

it acts on the momentum wave function by multiplying it by the momentum $p$. Therefore, your question really is: why does the momentum operator look like it does in the position representation?

There are various ways of evaluating this expression. One I really like involves the translation operator $\hat{T}(\alpha)$, the operator that translates a position eigenket by an amount $\alpha$, $\hat{T}(\alpha)|x\rangle=|x+\alpha\rangle$. This operator is given by $\hat{T}(\alpha)=e^{-i\alpha\hat{p}/\hbar}$. For an infinitesimal translation $-\epsilon$, we get:

If you want further details, I recently went through this here.

The justification is heuristic.

The only justifications I've seen were always the same: ... [De Brogile]...[Planck]...[Dispersion]

But thats it. Thats the ultimate reason. There isn't any deeper explanation. You can mathematically revolve around in a lot of ways but this doesn't explain it on a deeper level whatsoever.

So let's look at your actual question here:

But a plane wave is only one particular wavefunction (not even physical), how can you infer anything general about wavefunctions starting from properties of particular solutions?

Your Confusion is solved by Linearity. If you have a linear equation you can superimpose solutions and get another solution. Introducing energy and momentum for a plane wave will hence automatically introduce those for any wavefunction because you can expand it into plane waves.

Not the answer you're looking for? Browse other questions tagged quantum-mechanics energy operators momentum wavefunction or ask your own question.

0
How to derive or justify the expressions of momentum operator and energy operator?
78
Why can't $ i\hbar\frac{\partial}{\partial t}$ be considered the Hamiltonian operator?
112
Why are there only derivatives to the first order in the Lagrangian?
9
Energy operator
6
Time derivative of expectation value of observable is always zero (quantum mechanics)
13
Physically distinct quantizations

0
How to derive or justify the expressions of momentum operator and energy operator?
0
Green function in non-relativistic quantum mechanics for particles with complicated isotropic spectrum
2
Clarification in deriving the radial momentum operator $p_r$
5
Kinetic Energy operator in Quantum Mechanics
4
Momentum of a hydrogen system is imaginary. Why?
3
Why is an operator the quantum mechanical analogue of an observable?
1
Need verification if this simple derivation of the Schrödinger equation is valid
1
Correspondence between quantum operators and classical formulas