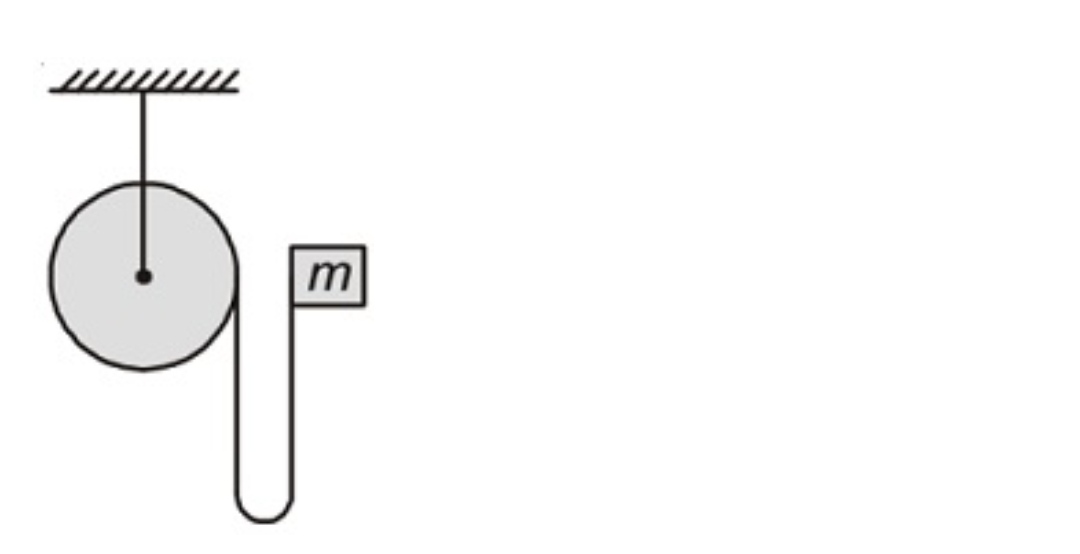 The block is released from rest. The angular velocity of the disc just after the string becomes taut is?

I understand this question requires application of conservation of angular momentum but I'm unable to write the equations. If I take the disc and block as system gravity is providing external torque in the form of weight of the block. What to do?

This problem is a little tricky in a way that probably was not intended. It would make more sense if the string was replaced with a spring.

When you drop the mass, it accelerates. But the disc stays still.

When the string becomes taut, that must suddenly change. The mass and the edge of the disc suddenly start moving at the same speed.

If they were connected by a spring, you would see the spring stretch, pulling the mass and the edge of the disc towards each other. The mass would slow down and the disc would start to spin. You would understand why conservation of momentum applies.

There is another kind of interaction like this - a collision. These also involve a sudden change in speed. Typically you don't think about what happens during the collision. You just work with speeds, momentum, and energy before and after.

Treat this like a collision. When the string comes taut, there are for a moment very large forces that slow the mass and make the disc rotate. Don't worry about those forces. Instead, use the conservation laws on the before and after situations.

Note that if they were connected with a spring, they need not move at the same speed afterward. That would be an elastic "collision".

Another way to set this up would have been to remove the string. Move the mass above the disc and coat it with glue. Drop it. As it passes the disc, it just touches the edge and sticks. That would be the same problem, more obviously as an inelastic collision.

You can't conserve momentum here.The clamp of the pulley will provide an impulsive force.It is an easy question,try using the equation -"impulse=change i momentum" and it's rotational analogue too.

Not the answer you're looking for? Browse other questions tagged homework-and-exercises newtonian-mechanics rotational-dynamics string moment-of-inertia or ask your own question.