Wave function as a ket vector in a Hilbert space

It seems you are talking about the position wave function $$\psi(\vec{r}). \tag{1}$$ Yes, this function is a member of an $\infty$-dimensional Hilbert space because there are infinitely many positions $\vec{r}$. However, this kind of wave function can only represent a spinless particle, but it cannot describe a particle with spin (e.g. an electron).

But we also have the wave function used to describe spin ("spinor"), and this wave function exists in a 2-dimensional Hilbert space.

Just to clarify: a spinor is a "vector" consisting of 2 complex numbers (without any dependency on position $\vec{r}$), like $$\begin{pmatrix}\psi_+ \\ \psi_-\end{pmatrix}. \tag{2}$$ So this spinor is a member of a 2-dimensional Hilbert space. This 2-component spinor can be visualized as a flag pole with a flag. 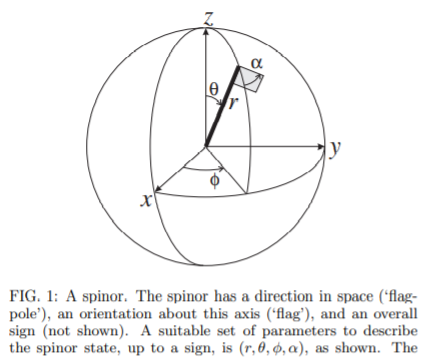 (image from An introduction to spinors)

When rotating a spinor its 2 components transform in a well-defined way. For more see An introduction to spinors (especially pages 2 to 5) by Andrew Steane.

So my question is, what is the relationship between these two different wave functions?

I mean, both are portrayed as a representation of the state of a particle, but they are clearly not the same thing. I've also heard that the wave function contains everything that there is to know about the particle, but I'm like, "which wave function?"

It is the spinor wave function given in (3) which contains everything knowable about the particle.

So let's start without spin. You can extract the wavefunction from the 'ket vector' by taking the inner product with the $|x\rangle$ state. The $|x\rangle$ ket represents a state with definite position where a particle is localised entirely on $x$. This is not a physical state (you can't normalise it) but still a useful tool. The wavefunction is then extracted like $$\psi(x)=\langle x|\psi\rangle$$ This might seem weird when you've never seen it written this way but it makes a lot of things more clear. The $|x\rangle$ states form an orthonormal basis: $$\langle x|y\rangle=\delta(x-y)\\ \int dx|x\rangle\langle x|=\mathbb{1}$$ and to convince you this is right you can calculate the inner product of the wavefunction: \begin{align}\langle\psi|\psi\rangle&=\langle\psi|\left(\int dx|x\rangle\langle x|\right)|\psi\rangle\\ &=\int dx\langle\psi|x\rangle\langle x|\psi\rangle\\ &=\int dx\ \psi^*(x)\psi(x) \end{align} To extend this to spin we consider the state $|x,\alpha\rangle$. This is a state with position $x$ and spin $\alpha$. For a spin 1/2 particle $\alpha$ could be up and down: $\alpha=\{\uparrow,\downarrow\}$. For the wavefunction this means $$\psi_\alpha(x)=\langle x,\alpha|\psi\rangle$$ We can collect the $\alpha$ components in a column vector. For the spin 1/2 particle: $$\begin{pmatrix}\psi_\uparrow(x)\\ \psi_\downarrow(x)\end{pmatrix}$$ The spin states also form an orthonormal basis. So for completion the inner product becomes $$\langle\psi|\psi\rangle=\sum_\alpha\int dx\ \psi_\alpha^*(x)\psi_\alpha(x)$$

This was a little more than you asked for but I hope it's more clear this way.

Yes, the terminology is sometimes a little bit sloppy. The Hilbert space is actually the product of the infinite dimensional Hilbert space defined on $\mathbb R^3 $ and two dimensional spinor space (or in relativistic qm, 4-dimensional space of Dirac spinors). My recommendation is to ignore terminology, and focus on mathematical structure. The wave function can be restricted to either space, and that is what people talk about. But when you say "the wave function contains everything that there is to know about the particle" this refers to the full wave function, not its restriction to either position or spin space,

Not the answer you're looking for? Browse other questions tagged quantum-mechanics hilbert-space wavefunction notation quantum-states or ask your own question.