Why can't we solve this question by using conservation of energy? [closed]

Ask Question
Asked 1 month ago
Active 1 month ago
Viewed 144 times
0
$\begingroup$
Closed. This question is off-topic. It is not currently accepting answers.

A block of mass $m$ is attached to one end of a light string which is wrapped on a disc of mass $2\,m$ and radius $R$. The total length of the slack portion of the string is $l$. The block is released from rest. The angular velocity of the disc just after the string becomes taut is: 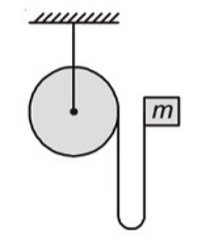 I am getting a different answer when I tried solve it by using conservation of energy.

The thing is that you can't use conservation of energy law in this case. At the moment when the string became taut some kind of inelastic impact would happen and some portion of energy would lost. Imagine, that the string is made of elastic rubber so that no energy would be lost. But in this case there will be some oscillations. In case the string is rigid these oscillations will fade out quickly, but some energy will be lost in the process.

Use the law of conservation of angular momentum.

Since it's a homework I will not provide a full solution. Just main steps.

In the beginning the block just falls. You can find it's speed $V_1$ at the moment just before the string gets taut.

Total angular momentum of the system at that moment would be $-m V_1 R$ - we calculate the momentum around the center of disk.

Now you calculate the total momentum of disk and block.

These two calculated angular momentum should be equal. And this would be the first equation on your picture.

Not the answer you're looking for? Browse other questions tagged homework-and-exercises newtonian-mechanics angular-momentum rotational-dynamics energy-conservation or ask your own question.