Is Moment of force equal to work done by force and equal to gravitational potential energy? (M = W = g.p.e. )

Ridiculous question but... If these equations are true:

(I am aware that the distances here are not the same, one is when it comes to pivots and the other for work)

But both have the same units, Nm (Newton * meter)

If force is contant and distance decreases, work done by works decreases..

First of all I suggest you take a look on how to use MathJax for correct formatting of the question as it is a bit difficult to read.

Now to the physics. Actually the torque of a force is defined as $$\vec{M}=\vec{r}\times \vec{F}$$ where $\vec{r}$ is the distance from a certain point to the point where the force is exerted. Work is defined as $$W=\int \vec{F}\cdot d\vec{r}$$ where $d\vec{r}$ defines a trajectory in space. Even though they have the same units ($\mbox{force} \times \mbox{distance}$), they do not represent the same physical quantities. You have to notice that torque is defined with respect to one point, which can be seen in the next image (sorry for the dimensions) 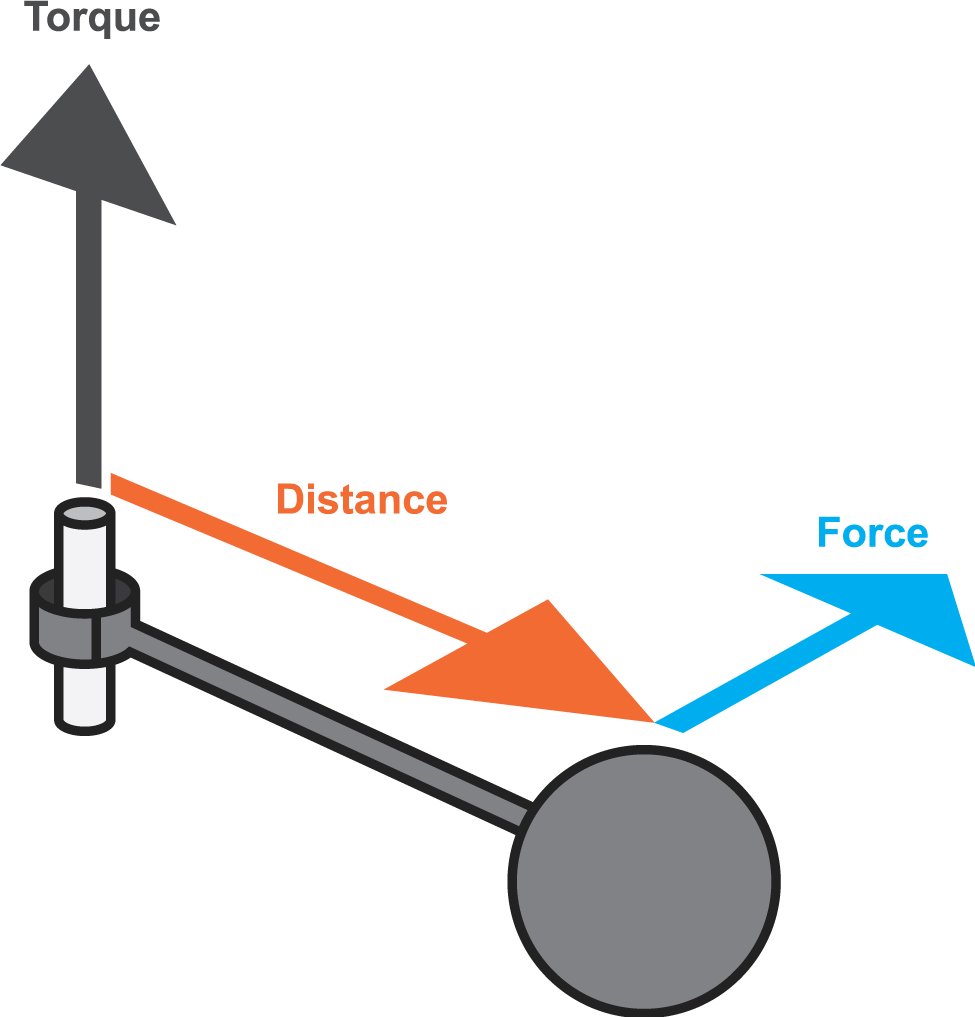 On the other hand, work needs a path to be defined, a path through which the force $\vec{F}$ is exerted. As it is an integral, it can be interpreted as the area under a curve:

Another very important difference is that work is always an scalar quantity, i.e. a number, whereas torque is a vector. The only "equivalence" you can find in your reasoning is between work and energy, which really represent the same physical quantity, as stated in the first law of thermodynamics. I hope this solves your question.

Where $θ$ is the angular displacement in radians as a result of applying the torque.

Torque and force are related by

Where in this case $θ$ is the angle between the force $F$ and displacement $r$ vectors, and the final term in the equation is the magnitude of the torque.

Not the answer you're looking for? Browse other questions tagged newtonian-mechanics rotational-dynamics work potential-energy torque or ask your own question.

57
Why is torque not measured in Joules?

1
Potential energy and the work energy theorem
1
Work Done by Gravitational Force
0
How can an external force acting on a particle be a Newton 3 pair with a conservative force?
1
How does negative gravitational work result in an increase in potential energy?
1
What's wrong with this argument that the potential energy of an arbitrarily heavy object at arbitrary height is $0$?
1
Potential Energy of body and Earth system
17
Definition of a joule
4
Work and energy: conceptual doubt