What is exactly is Crystal Momentum, $\hbar k$?

The title says it all really.

Does this mean that the crystal is moving?

From my notes, I read that

The missing ingredient, required to describe conduction, is scattering, which we assumed to be negligible. But where does the scattering come from? While the force of the electric field on electrons causes a change in crystal momentum, scattering must somehow restore the crystal momentum to their original values. Since Bloch oscillations are incredibly difficult to observe, electrons must be scattered before they can cross the FBZ boundary. The only other entities within the crystal with large crystal momentum are of course phonons.

These quotes are not related and quite honestly I have no idea what any of the quotes mean, as I don't know what is meant by 'crystal momentum'. If anyone wants to know the context from which those quotes came please let me know.

So, my question is as follows: In layman's terms (if possible), what is crystal momentum?

Before posting this question I looked at this question and I'm finding it hard to understand. I'm only a 2nd year undergraduate, who has begun reading solid state.

Crystal momentum arises when you consider the allowed energy eigenstates of the electrons which inhabit a crystal. One finds that the allowed energies in crystals are not discrete (as they are for an isolated atom), but rather form continuous bands separated by gaps.

In the plot below, I've plotted the first band in blue and the second band in red; the dotted lines on the vertical axis show the continuous intervals of allowed energies which correspond to each band. 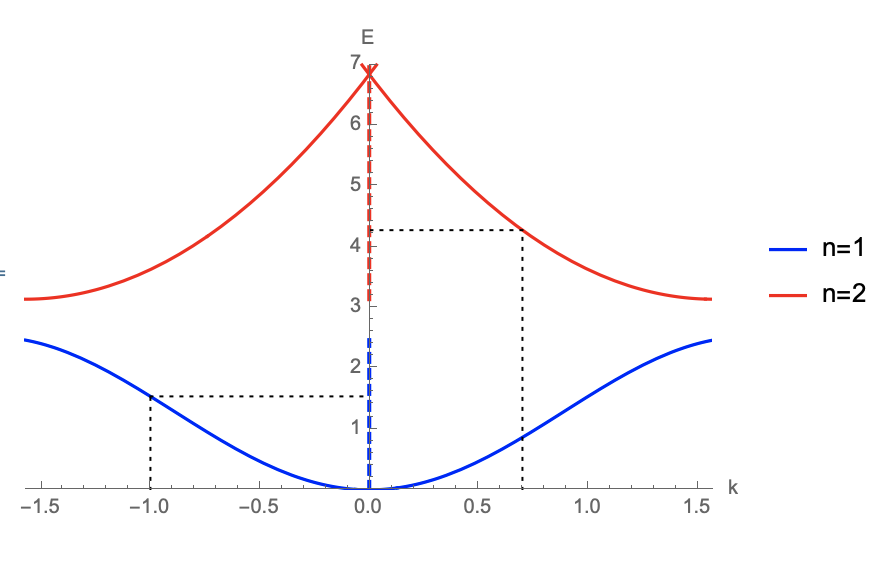 Despite not being the genuine momentum, $\hbar k$ has some momentum-like properties. Applying an external force to the electrons in the system causes the crystal momentum of a particular state to change according to $$\frac{d}{dt}(\hbar \mathbf k) = \mathbf F_{ext}$$

Not the answer you're looking for? Browse other questions tagged momentum solid-state-physics semiconductor-physics crystals bloch-oscillation or ask your own question.

21
Is crystal momentum really momentum?
8
How should I be thinking about phonons?
0
What is exactly a phonon?