Consider a particle in confined in a 2D box as shown below. 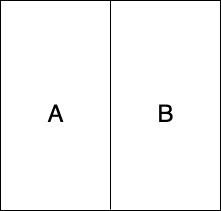 We can hence say in this time period of $\delta t$, a probability quantity of $\delta p$ flowed from A to $B$.

It is then natural to think of a probability current that flows from $A$ to $B$, carrying with it quantities of probability $\delta p$ in each time period $\delta t$ .

For example, when the wave packet associated with a particle is moving (i.e. its position expected value is changing with time), this motion is accompanied by a probability current distribution localized around the wave packet, pointing roughly in the direction of motion. Or when you have a flux of particles moving in a certain direction, this flux is accompanied by a probability current in this direction, just like with electric current.

It is a "workaround". We talk about probability flowing because it obeys a continuity equation, namely $$\frac{\partial \rho}{\partial t}+\nabla \cdot \vec{j}=0 $$ where $\rho$ is the probability density and $\vec{j}$ is the probability current density. Now, by integrating on a finite volume, we have $$\frac{d}{dt} \int_V \rho dV=-\oint_{\partial V} \vec{j} \cdot d\vec{S} $$ where we have used the divergence theorem on the second integral. The first integral corresponds to a probability, so what this equation means that probability is conserved throughout time, i.e. always is normalized to 1. Also, it says that if the probability in certain volume changes, it is because there has been a nonzero flux through the surface of the volume.

The total probability is $1$ at all times, so it's a conserved quantity expressible as an integral over all space, in this case of a probability density. It's as if you had one litre of water you could move around. Physics includes other quantities like this, such as mass of a gas with a certain mass density, electric charge with a current density, heat (if it's conserved), and so on. In fact, as a matter of terminology it seems electricity only has a "current" because the term is borrowed from how water flows.

What all these have in common is that the rate of change of the volume integral over a closed region is the rate of in minus out across the region's surface. This gives the integral form of the continuity equation for all these examples. Some are more familiar to personal experience than others, but mathematically they're all exactly the same in this respect. (When quantities are allowed to not be conserved, you can make the equation more complicated to include sources & sinks, but obviously that's not applicable to probability. This treatment of probability is also equally valid in classical physics.)

The integral form of the continuity equation is equivalent to its differential form, as explained in @ÁlvaroLuque's answer.

Not the answer you're looking for? Browse other questions tagged quantum-mechanics probability or ask your own question.