Consider the case of objects rolling down an inclined plane at different speeds depending on their moment of inertia. Some basic equations are shown in this screenshot from Michel van Biezen. He is considering the specific case of a solid cylinder but my question is more general: 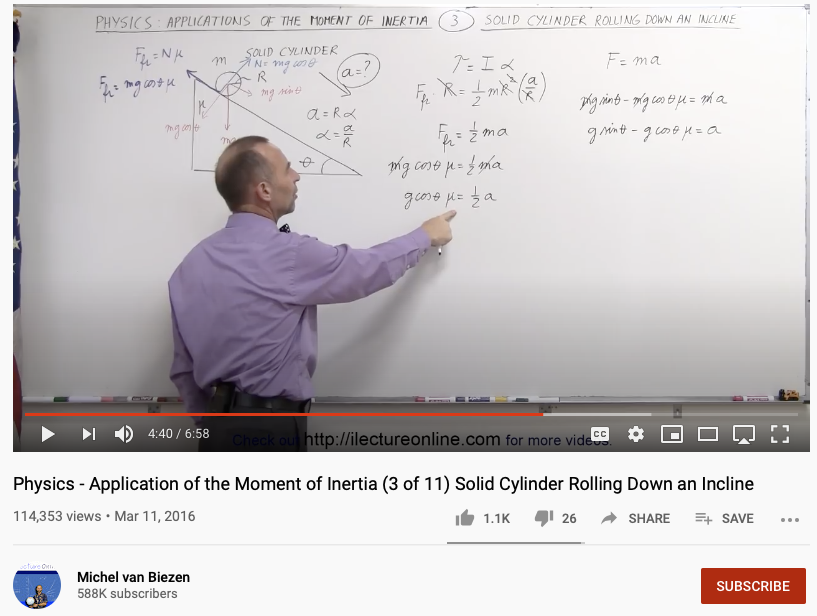 Let's say we are comparing a metal solid sphere with a shell of the same radius made with the same metal. We know from demonstrations that the objects do not have the same speed as they move down the plane and don't arrive at the bottom at the same time.

Focusing on the equation of motion along the surface of the plane,

we see that for the acceleration to be different for the two objects the coefficient of friction, 𝜇, has to be different. If 𝜇 were the same then both objects's center of mass would reach the bottom of the plane at the same time.

So that leads me to ask why is 𝜇 different for a solid sphere and a shell, as it appears it must be?

I have looked at What factors determine the coefficient of friction? and don't think it answers my question. In the case I'm asking about, the materials of the sphere and shell are the same, as are the total mass and radius.

So that leads me to ask why is $\mu$ different for a solid sphere and a shell, as it appears it must be?

The $\mu$ don't have to be different or the same. Depending on the inclination $\theta$ only a part of the potentially available friction force is used to prevent sliding. Assuming roughness is sufficient, neither rolling objects will start slipping, even if the friction force will in both cases be smaller than the potential friction force.

Consider the simpler case: a block that might slide down an incline:

For a stationary block the net force would appear to be:

But of course it cannot be negative! That would mean the block would start moving to the left!

In reality, only the useful part of the friction force is used:

Assuming there's enough friction to prevent slipping, then inertia comes into play. As potential energy $U$ is converted to kinetic energy $K$, we can write:

For a full cylinder $\gamma$ is higher than for a shell-type cylinder, so $v$ is higher for the latter case.

Therefore, all we can say for the net force acting on the object along the incline is $$ma=mg\sin\theta-F_s$$

Noting that for simple rolling objects $I=\gamma mR^2$, and for rolling without slippping $a=\alpha R$, one can show that

So as we can see, we do get different static friction forces for objects with different moments of inertia, even if they are made of the same material on the same incline.

So, we also see that the angle of slippage depends on both $\mu$ and $\gamma$.

Not the answer you're looking for? Browse other questions tagged newtonian-mechanics rotational-dynamics friction moment-of-inertia or ask your own question.

9
What factors determine the coefficient of friction?