I am currently studying Classical Mechanics, fifth edition, by Kibble and Berkshire. Problem 2 of chapter 1 is as follows:

The two components of a double star are observed to move in circles of radii $r_1$ and $r_2$. What is the ratio of their masses? (Hint: Write down their accelerations in terms of the angular velocity of rotation, $\omega$.)

The only relevant information provided by the chapter is as follows:

If we isolate the two bodies from all other matter, and compare their mutually induced accelerations, then according to (1.1) and (1.3),

Since the textbook chapter does not provide enough information to complete this problem, I referred to the Wikipedia article for angular velocity. Writing linear velocity as $v = \omega r$, we get

The only way that I can see to proceed would be to assume that the angular velocities $\omega_1$ and $\omega_2$ are the same (I have no idea if this is implied by the physics of a "double star"):

Why are the angular velocities equal? And what happened to the negative sign? I would greatly appreciate it if people would please take the time to clarify this.

Your core question appears to be:

Why are the angular velocities equal?

For some reason, Wikipedia's articles about the two body problem do not clarify this important point. Here are a couple of diagrams from that article:

Two bodies with similar mass orbiting a common barycenter external to both bodies, with elliptic orbits—typical of binary stars.

Two bodies with a "slight" difference in mass orbiting a common barycenter. The sizes, and this type of orbit are similar to the Pluto–Charon system (in which the barycenter is external to both bodies), and to the Earth–Moon system—where the barycenter is internal to the larger body.

According to Newton's law of gravitation, the gravitational force between two bodies acts along the straight line connecting their centres of mass. This is the key to your question about angular velocities.

(It can also be shown that the gravity of a spherically symmetric body acts as if all of the body's mass were concentrated at its centre, so we can treat the body as a point particle).

So we have two stars, $S_1$ and $S_2$, exerting gravitational force on each other. The centre of mass of this system must be located on the line $S_1S_2$ that connects the two stars' centres. We can choose a reference frame with the centre of mass as its origin, like in the above diagrams. (As Rob Jeffries says, we can do this because of conservation of momentum). So I'll call the centre of mass $O$.

Now as the stars orbit around $O$ the only forces they exert on each other always act along the line $S_1OS_2$, so the stars and the centre of mass must remain collinear, although the line $S_1OS_2$ rotates, and may change in length (as it does in the elliptical orbit example).

The only way for that to happen is for the angular velocities of the two stars,$\omega_1$ and $\omega_2$, to always be equal to each other. Otherwise, $S_1OS_2$ turns into a triangle, not a straight line.

That negative sign merely tells us that the position vectors of the two stars, $OS_1$ and $OS_2$ point in opposite directions. That is, the two stars are on opposite sides of $O$.

In the absence of external forces, the total momentum of the system is constant. That means the stars must arrange themselves so that the centre of mass stays in the same place.

The only way they can do this is if they orbit with the same period and hence the same angular velocity, as shown below.

If that were not the case, then the centre of mass would "wobble about", which is clearly unphysical.

For double star $\omega_1 = \omega_2$, because it is a rotating dipole, which every point achieves $2\pi$ rotation in same period $T$. I.e. imagine a couple of people holding each other hands and rotating around their COM. Can their angular speed differ ? No, they have same $\omega$, as well as each dipole point along the line connecting them. Check this pic : 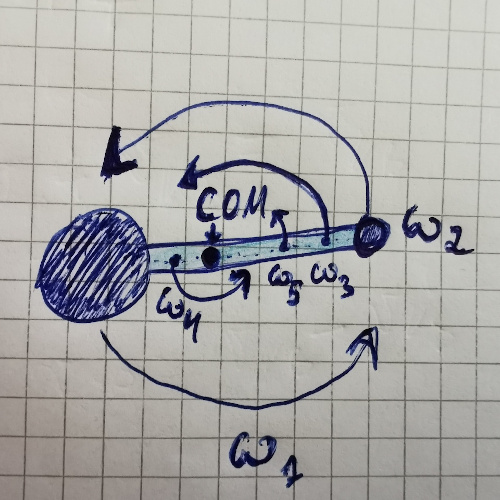 Where $\omega_n$ is n-th point along the line connecting pair of bodies and going through their barycenter angular speed.

Not the answer you're looking for? Browse other questions tagged homework-and-exercises classical-mechanics angular-velocity binary-stars or ask your own question.

0
How to show that if two masses($m_1$ and $m_2$) are connected($r_1<r_2$) with a string moving around a point A, they move with same angular velocity?
0
Will two planets in a binary star system rotate in the same circle around the mass center every period?
0
Problem: Spectroscopy of a binary system
5
Conservation of spin angular momentum in a close binary system
1
Different approaches gives different results: planetary gear problem?
2
Finding mass ratio from the collision of two bodies
2
In general, conservation laws do not hold whenever the center of mass of the system is moving?