This is from chapter 4 of David Tong's notes on Classical Dynamics (Hamiltonian Formalism).

Now I can't understand how he deduced the above results, especially the last one from the equations (1) and (2). Also, I have no clue how we can conclude the result of (2) without involving the Jacobian. I am completely clueless about this. Any sort of help is appreciated.

I am not entirely sure of what objections you have, but I will try to explain what Tong is getting at from a different angle, and perhaps then the route he takes through his notes will make more sense. The idea he's trying to get across is roughly that one can view time evolution as being a canonical transformation which is generated by the Hamiltonian function - however, different functions (substituted in place of $H$) will generate different canonical transformations, which can have very deep implications.

To any smooth function $F(q_i,p_i)$ on the phase space, we can associate the Hamiltonian vector field (not to be confused with the Hamiltonian function) $\mathbf X_F$ given by 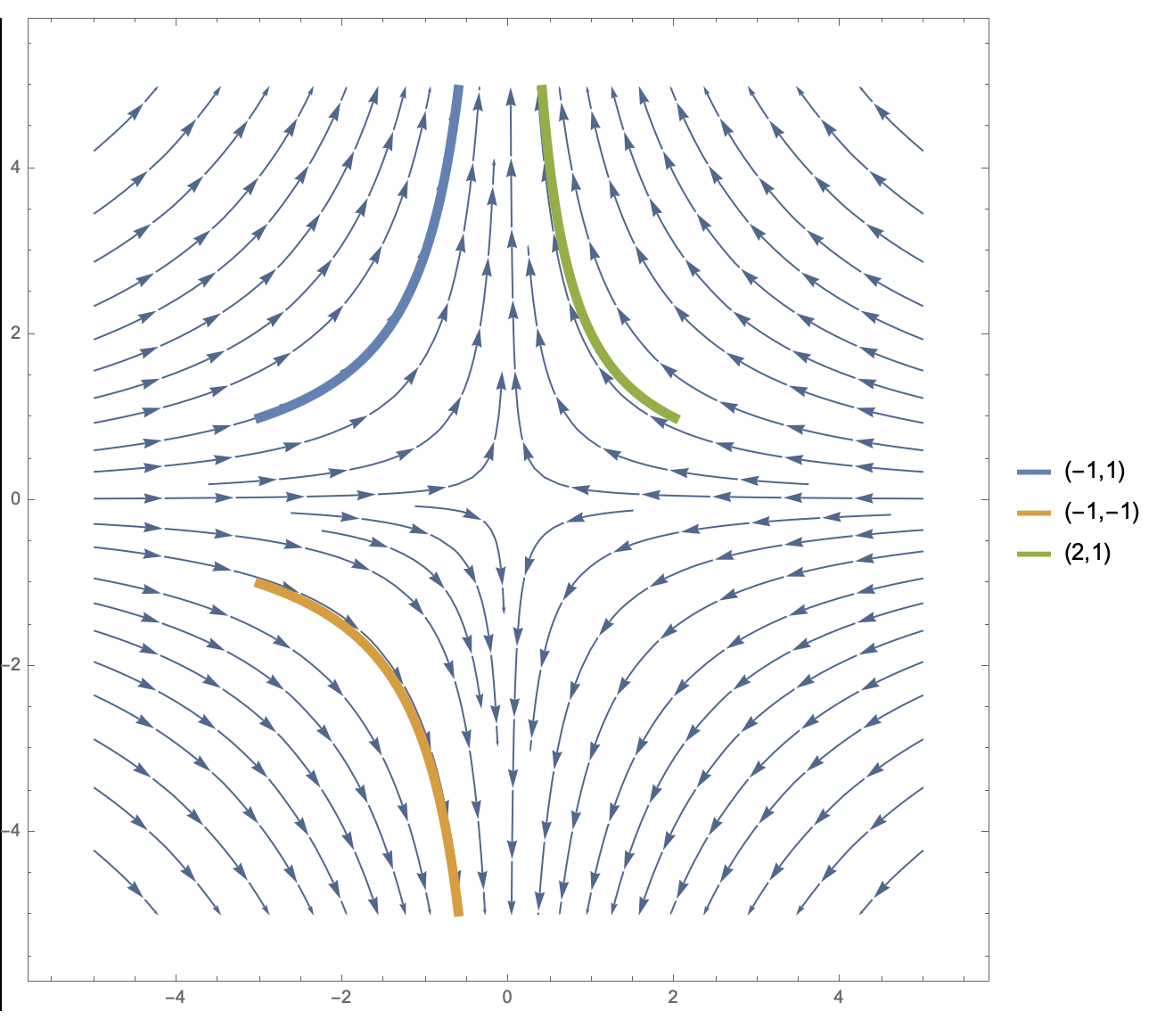 With this idea of integral curves in mind, we can define a map which takes points in the phase space and "pushes" them along the flow to new points in phase space. The flow $\Phi_{\mathbf X}^\lambda$ is a function which eats a starting point $(q_0,p_0)$ and sends it to the point $\big(q(\lambda),p(\lambda)\big)$ which you get by following the integral curve of $\mathbf X$ for a distance $\lambda$. Explicitly, using the vector field from the last example,

We can then use the integral curves of this vector field to define the associated Hamiltonian flow $\Phi_F^\lambda$. We say that the function $F$ generates the flow. The flow we obtained in part 4 is an example of a Hamiltonian flow generated by the smooth function $F(q,p)=-qp$, as you can quickly check.

where $\{\bullet,\bullet\}$ is the Poisson bracket.

The point that Tong is making is that every smooth function $F$ on phase space generates a Hamiltonian flow $\Phi_F^\lambda$, and that these Hamiltonian flows are, in fact, canonical transformations for every choice of $\lambda$. Therefore, smooth functions generate entire families of canonical transformations which you get by following the flow for some chosen distance.

Though it may not seem like it, this is a deep and beautiful idea which provides the entire structure of Hamiltonian mechanics. First and foremost, note that the flow generated by the Hamiltonian function itself pushes points in phase space forward in time (that is, the parameter $\lambda$ should be interpreted as the time). So right off the bat, we see that once we have defined this structure, we can say simply that $H(q,p)$ generates the flow corresponding to time evolution.

There is more to the story, however. Note that if we choose the function $P(q,p)=p$ rather than the Hamiltonian, the resulting flow gives (exercise for the reader) $\big(q(\lambda),p(\lambda)\big) = (q_0+\lambda,p_0)$. We therefore say that the momentum function $P$ generates spatial translations. It is a good exercise to show that $L_z$, the $z$-component of the angular momentum, generates spatial rotations about the $z$-axis.

It might be clearer if we reduce to the one-dimensional case.

Suppose we have just one coordinate $q$ and one momentum $p$. Hamilton's equations are:

Suppose we apply the following transformation:

Now let's suppose we want to write Hamilton's equations in terms of $P$ and $Q$. We can do this using the chain rule:

or in other words:

Simplifying, and dropping terms of order $\alpha^2$ (remember, $\alpha$ is small), we arrive at:

which, by Clairaut's theorem, is true for any continuously differentiable function. The idea of this generating function is essentially an insight from inspecting the equation, seeing one partial derivative on one side, a different one on the other, and remembering that you can swap around the order of partial derivatives without consequence as long as your function is continuously differentiable.

Now, if you want to do this with multiple variables, you'll find that the calculations get tedious extremely quickly. Fortunately, we have tools that deal with systems of linear equations extremely efficiently, namely, matrices. If you inspect our work above, you'll find that all of it can be rewritten in matrix form. The original Hamilton's equations can be written as:

while the coordinate-changed ones can be written as:

where $\mathcal{J}$ is precisely the Jacobian of the coordinate transformation.

This means that a canonical transformation must satisfy:

Not the answer you're looking for? Browse other questions tagged classical-mechanics coordinate-systems hamiltonian-formalism vector-fields phase-space or ask your own question.