Does it make sense to say that something is almost infinite? If yes, then why?

As someone who hasn't studied very much math, "almost infinite" sounds like nonsense. Either something ends or it doesn't, there really isn't a spectrum of unending-ness.

Almost infinite can make a lot of sense in physics. There isn't a precise definition but I would interpret it as the following: when something is 'almost infinite' the properties we are considering will barely change when we make the system actually infinite.

"Almost infinite" is a sloppy term that might be used to mean "effectively infinite", in a given context. For example, if a large value of $x$ in $y = 1/x$ produces a value smaller than the accuracy of measurement of $y$, then it's often reasonable to set the value of $y$ to zero, which is equivalent to setting the value of $x$ to infinity.

Your observation that "either something ends or it doesn't" is correct, but at the same time not particularly useful.

Mathematical language exists to convey ideas; and sometimes slightly sloppy language, which does not correspond to any well-defined mathematical object or property, can help convey those ideas.

So even though $x$ isn't actually infinite, the distinction is not essential for our application, and we can communicate this observation by saying it is almost infinite.

In general, as a student advances in her studies of math, first she learns how to do things rigorously, and later she learns how to not do things rigorously. That is, she understands the underlying ideas well enough that she knows when she can sacrifice the accuracy of the language - when it is safe to do so without sacrificing the accuracy of the underlying ideas - in order to facilitate communication.

That said, I don't know if the specific phrase "almost infinite" would be commonly used for this purpose. Among other reasons, because the word "almost" is used in many contexts for properties which do have a specific rigorous meaning.

I'll also note that I didn't watch the linked video, so I can't comment on how it used the term.

In layman's terms, something is “almost infinite” if it is so large that it would make no difference if it was any larger. This can be formalized with the mathematical notion of limit, as shown in previous answers. Here, I would just like to add a simple illustration. Here is a picture of my 35 mm lens: 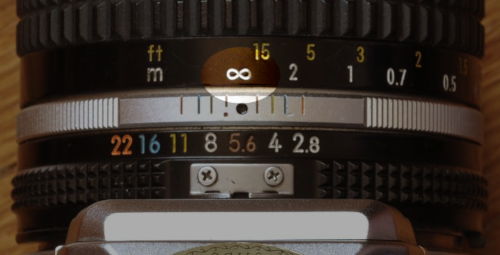 See the infinity marking I highlighted on the focusing distance scale? This indicates the correct focus for photographing a subject that is infinitely far. Whether it is a mountain range a few kilometers away or a star field a few parsecs away makes no difference. As far as the lens is concerned, anything further than 50 m or so may be considered “at infinity”.

This can be understood by looking at the lens equation: a subject at infinity would produce an image at the lens’ image-side focal point (in the sense of a mathematical limit). If the distance to the subject is much larger than the focal length, then the position of the image is also, to a very good approximation, at that focal point.

How far is infinity obviously depends on the context. A greater film or sensor resolution, a better lens quality, a longer focal lens, or a larger aperture, all push “infinity” further away. It could be argued that the hyperfocal distance is the shortest distance that could be considered at infinity.

In physics if a quantity, call it $\lambda$, in a theory was said to be "almost infinite", I would interpret this as stating the effective theory obtained by taking the limit $\lambda \to \infty$ is accurate up until some very long length scale or time scale after which it breaks down.

Crucially this breakdown length/time scale is much greater than the intrinsic scales of the effective theory (at least in some useful regimes), so there is a very small approximation error induced by using the $\lambda \to \infty$ effective theory on its own intrinsic timescales.

I think a lot of the answers here have missed the key point that $\lambda$ is only meaningfully close to $\infty$, if the theory's predictions are close to those of the $\lambda \to \infty$ effective theory.

More boringly I would just note that "almost infinite" is just the reciprocal of "almost zero".

As someone who hasn't studied very much math, "almost infinite" sounds like nonsense. Either something ends or it doesn't, there really isn't a spectrum of unending-ness.

The intended meaning of the offending phrase “almost infinite” is that the quantity $x$ in question is so big that the system concerned is well modelled by the theoretical limiting case $x\to\infty$ (which is often mathematically simpler). As others have remarked here, a better shorthand for this description is “effectively infinite”.

The video is being sloppy: to form a two-dimensional square out of one-dimensional lines, where both are ideal mathematical objects, not things that exist in the physical world, requires an actual infinite number of lines. An uncountable number, even.

Similar concepts can be made mathematically rigorous, though. If "almost all" elements of an infinite set have some property, depending on context, this means something like "there are only a finite number of exceptions" or "the size of the set of exceptions is a smaller infinite cardinal than the size of the whole set." For instance, almost all prime numbers are odd, almost all integers are either positive or negative, and almost all real numbers are transcendental. Related terms are "almost everywhere" and "almost surely".

"Almost infinite" makes sense as a description of something so extremely large that it cannot be comprehended, and for all intents and purposes it is infinite.

It's like any other description where it can be used if it makes sense within the context. One might say a car is big relative to other cars, but not to other trucks.

However, "almost infinite" mathematically is arbitrary. If a number, say 1e100, is very large, one could say it's "almost infinite", however, any non-infinite number when divided by infinity is zero, so any number you take is going to be 0% of the way to infinity, which is certainly not "almost".

Technically, it makes no sense to say, as nothing can be almost infinite, unless perhaps you're comparing a function that almost approaches infinity but doesn't, however the proximity to the function that would approach infinity is much greater than the proximity of other functions being discussed.

However, it can be used as a description to describe something as incomprehensibly large, such as 1e100 where the number has almost no meaning. It can be used in this context and I think that's a fair usage and way of conveying the number, however from a technical perspective it's wrong.

As many have remarked, things can be treated as if being infinite without making a noticeable difference for all intents and purposes.

That being said and well understood, the OP is right to be uneasy about the word "almost" since it connotes "getting there" and "close to" and well, even the biggest number you can think of falls just as short of infinity as any other one.

There are even different kinds of infinity, and none of them is almost like any other one.

No. All numbers are equally far from infinity---because by definition infinity is a quantity you can never ever reach. You can't reach it from one, from ten, from a gazillion.

If you tried, it would take you an infinity of time to reach it, no matter your starting point. If a gazillion was any closer to infinity, you would reach infinity in a shorter measure of time---except such a thing is possible only for finite numbers.

Since no number can be any closer to infinity than any other, it is nonsense to say that a number is so large that it is practically infinity. When people say this, they are using a figure of speech---a hyperbole---for emphasis. You can do this, because spoken language isn't quantitative and its rules are flexible enough to allow it---and in fact it can be good practice to use figures of speech like this when writing persuasive papers.

Figures of speech come natural to us, and you should use them. But you should also recognize them for all they are---not accurate expressions of how things are, just a means to highlight things of interest to us that we want others to remember.

But mathematics and physics and many other disciplines are quantitative, and there you have to be careful with such statements. You can make them for emphasis in technical papers if you know your audience will understand them to be figures of speech, and if such figures of speech aren't frowned upon (which they can be in strict scientific research papers).

So can a number be almost infinite? No. But can a number be so large that we struggle to comprehend it, so that it feels to us almost like... it's infinite? Sure. I know the age of the universe but I can't really truly comprehend that number the way I do my own age, say, so 13 billion years and infinity feel to me almost the same.

It's just that to feel is not to know, and to know measures we rely on mathematics, which tells us unequivocally that all numbers are equally far from infinity and therefore that no one number can truly be "almost infinite." It either is or it isn't, the same way the clock either says noon or it doesn't---there is no middle ground.

In the actual real physical world, there are many quantities which are very large, e.g. the speed of light (certainly compared the speed of everyday objects), size of the observable Universe, the age of the Universe, but I cannot think of a quantity which actually is infinite. Arguably infinite density of the singularity at the centre of a black hole may not actually exist because the laws of physics (general relativity) break down at this point and we do not have a full theory which explains what happens. Infinity is a mathematical construct

Not the answer you're looking for? Browse other questions tagged mathematical-physics spacetime-dimensions or ask your own question.