I drew a mechanical model of a marching band analogy of refraction of a wave front using the concepts of a geometric/trigonometric proof of Snell's Law. The drawing is attached to this question. I have drawn three conditions for wave fronts on the opposite side of the interface (solid blue dot if $v_2 < v_1$, red if $v_2 = v_1$, and open circle if $v_2 > v_1$).

What I am finding is that the marching band members squeeze together (narrowing of the wave front) when they move from slower medium to faster medium. And they move apart when they move from faster speed to slower speed. In the limiting case of total internal reflection, the marchers move along the axis of the interface. The marching band members on the faster side seem to be very bunched up and moving as a tight group along the diagonal to keep up with the next marcher not yet at the interface and travelling a shorter distance to re-establish the wave front in the same time.

From a mechanical point of view, I am somewhat comfortable with this. I am also somewhat comfortable with the underlying geometrical reasoning that the direction of the marching band or wave front must change at the interface to maintain a front that moves in a direction perpendicular to the axis of the marching band line or wave front. I also know that quantum mechanically we think of light intensity as the number of photons arriving in a period of time.

My question is does this mechanical squeezing or widening has implications for the behavior of light in refraction? 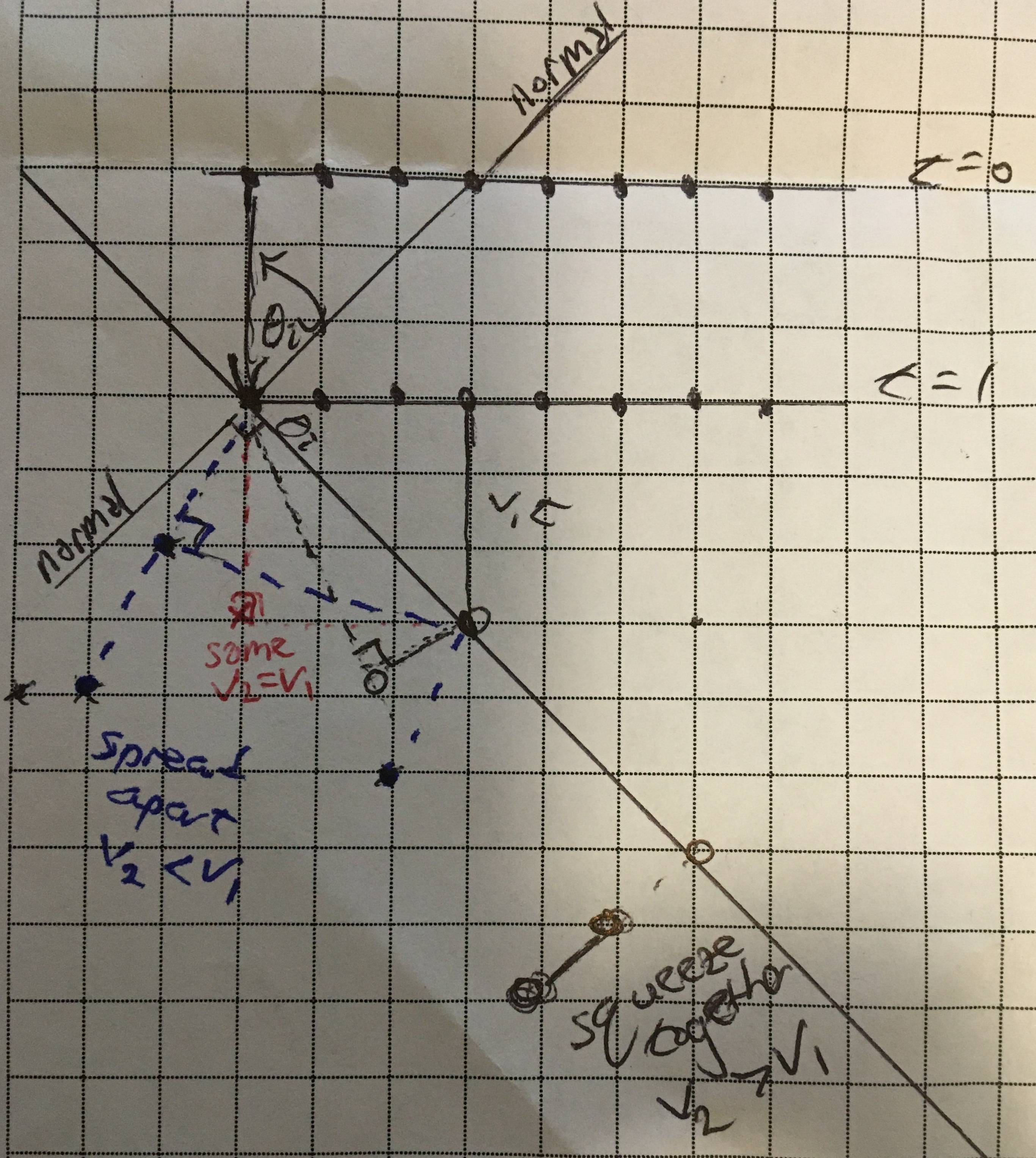 Your analysis is correct: the width of a beam can change when the beam can change direction when it crosses the interface between two media with different refractive index. This changes the beam's intensity, but does not change the number of photons per second in the beam.

A diffraction grating does something very similar: when a beam changes direction upon being diffracted, its width can change.

This is what imaging optics is about. It is what a lens does.

5
Refraction of light marching band analogy
2
What is the proper way to understand Fermat's principle?

5
Refraction of light marching band analogy
1
What is the relation between polarization and wave front?
3
Proving that angle of incidence over angle of reflection is constant in Snell's Law
2
What does "intensity of light" mean?
2
Wavefronts, refraction, and the marching soldiers analogy
0
What does it mean for a wave to be fully transmitted?
0
Refraction across two interfaces: Snell's laws for a light ray and the law of sines for a triangle