Can length contraction actually be seen in the real world? Light from different parts of an object will reach an observer at different times

The following passage comes from a high school physics textbook, in a chapter about special relativity and length contraction. Specifically, an example was given about a train travelling at relativistic speeds passing a stationary observer, and the fact that a stationary observer would measure the train to be shorter than it actually is (its 'proper length'), due to length contraction.

The effects of length contraction would not be 'seen' in a real-world sense. If you were to watch the relativistic train used in this example as it approaches, the light reflecting off each end of the train would reach you at different times; as the speed of light is finite, the light travelling from the front of the train would reach you before that reflecting off the back of the train. This causes an optical aberration, distorting the image. As the train is moving towards you it will appear elongated or stretched; while it moves away it will seem to be squished.

I understand that, because the speed of light is finite, the light from the front and back of the train would reach the observer at different times. I also understand how this would lead to the object appearing elongated or squished as it moves towards or away from you. But does this fact alone mean that length contraction is never actually seen? From my understanding, the whole concept of relativity comes from the fact that the speed of light is finite (and that it's measured the same in all frames of reference), because if the speed of light was infinite then none of the 'light clock' thought experiments would work, and neither would Einstein's thought experiment where he is in a train travelling away from a clock.

So, my question is, can length contraction actually happen and be seen in the real world in the way described by the equations? If not, is it because of the phenomenon mentioned in the above passage?

The apparent image of an object that is executing a relativistic fly-by is the subject of the Terrell Rotation (see figure [click for animation]).

As the speed of the object increases, it appears more and more rotated, as light from the near and far sides (in the transverse direction) that were emitted at different times in the flyby arrive at the observer simultaneously.

It is important to remember that in thought experiments such as the famous paradoxes, it is not what the observer physically sees at any moment that is paramount; rather it is, what is their 3D space plus 1D time reality. This is quite often a stumbling point for noobs and crackpots, but one must remember: thought experiments are not resource limited like real experiments. Alice, Bob, their twin siblings, and every other observer can be imagined to have an infinite lattice of tiny lab assistants, all with synchronized clocks and each with calibrated rulers recording what is occurring. Moreover, they can assemble their observations in a snapshot of simultaneity after the experiment is over.

In the event that many stationary observers at a train station photograph a relativistic express train passing though, they will assemble an image of a contracted train. 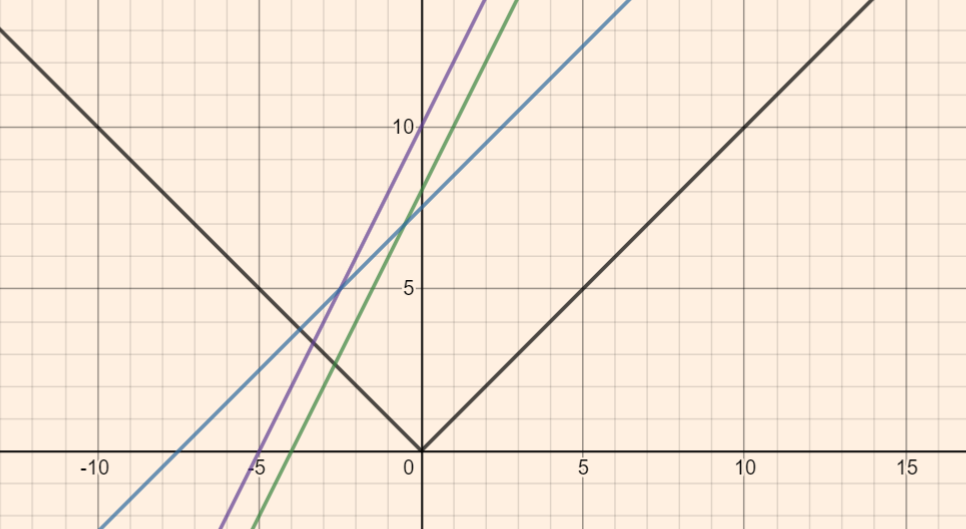 Okay so this image is a bit daunting, and by no means should you discount Terrell Rotation (it's one of the most interesting parts of relativity in my opinion), but this should help give an idea of what is meant by your book I think, for a one dimensional case.

So, the graph represents a space time diagram (made on Desmos as I couldn't think of a better method, so $c=1$). The black lines represent the lightcone from the origin, which I've only included to make things clearer. The purple and green lines can be thought of as the start and end points of a rod travelling at $1/2$ light-speed in this case, which in this frame has been length contracted to one unit on the $x-\text{axis}$. Now the blue line is the most important, it represents light hitting an observer at the origin at $t = 7.5$. You can see quite clearly that the observer will see the purple end as being more than one unit from the green end of the rod at this time, based on where the lines intersect, and dropping down to the $x-\text{axis}$. This length is actually longer than the rest length of the rod, and if you do a similar thing but once the rod is moving away, you will find that it is shorter.

Indeed I don't know anyone who has actually observed a rod at $c/2$ to tell me if they noticed this, and I think it is actually just an odd consequence of the human inability to fully conceive space and time as being on equal footing.

We can easily 'see' time dilation in a fast-moving body, for two reasons:

Firstly it is fairly easy to measure time and frequency to accuracy and precision better than one part in 10^12 (the best clocks are around 1 in 10^14).

Secondly, it is easy to do that measurement remotely from the body in question because, for example, we can measure the frequency of an EM radiation signal emitted by that body. So long as the radiation is intense enough to detect - we can make the measurement a vast distance from the moving body.

But measuring length contraction in a moving body is much harder. Physical (contact) measurements are limited to worse than parts per million. In principle we can do much better with interferometric methods for measuring length, but almost any practical measurement requires the body we are measuring to be stationary relative to the measurement apparatus, or at the very least in close proximity to it. I doubt that any conceivable technology will ever allow us to directly measure relativistic length contraction.

1
What does the Problem 14 from Goldstein's book on classical mechanics chapter-7 (special relativity) really mean?

1
Einstein's train-platform thought experiment — what if we're not talking about light
1
Using light clocks, can one derive the length contraction formula without the 'bouncing' of the photon?
1
A big confusion regarding to the 2 thought experiments of Relativity of Simultaneity leading to other confusions
3
Derivation of Relativity of Simultaneity
1
Einstein light clock with mirrors but what if mirrors outside the train?
0
Light perpendicular to spaceship constant relativistic speed - different points where it hits the wall as seen inside and from outside?