The future limit of the observable universe [closed]

Apologies in advance for the size of the question. Apologies also for English, I read well, but I can not write well so I use a translator. I thank everyone who will answer me.

Guys, I started reading and watching videos about the observable universe (O.U.) and understood the whole part of the expansion of the universe and why the radius of the O.U. is greater than the time of existence of the universe. So, I'm going to put my assumptions that will lead me to doubt.

Second, the point at which the speed of expansion of the universe becomes greater than that of light expresses no meaning for the O.U.; because, as the speed of expansion depends on the distance, if a photon comes out, for example, (and I'm just talking about a number that makes sense to me), from a point to 3 billion light years from us, the photon will reach Earth with a nearly zero "relative speed". I know that classic physics does not aply here but just for the sake of understanding. In other words, it will advance less and less on its journey from the point to 3 billion years to Earth. Is that right? Are my assumptions wrong?

If what I said above is right, then the facts are that: the future limit of the O.U. is somewhere around 60 billion years ago, and the point at which the speed of expansion equals the speed of light (14-15 billion light years of our reference) and the fact that our visible universe today is 45-46 billion years, this are correlated some way? Are these points correlated at all?

If they're not, then what did this paragraph of a FORBES article mean?

Please, give me a light because I do not see the correlation, for me this point that will be 60 billion years is not a point that is 14 billion years from us now, because this point will never reach us, even if a photon comes out with a "relative speed" positive the speed of expansion of the universe will became greater than the speed of the light before this point reach us and then the photon will be traveling forever.

One can answer your question by using slightly odd measures of space and time that make the problem simple. A great (if perhaps technical) paper looking at this is Expanding Confusion: common misconceptions of cosmological horizons and the superluminal expansion of the Universe by Davis & Lineweaver (2003).

You are right that the distance where galaxies get more than light-speed relative to us (the "Hubble sphere") does not matter for the size of the observable universe. Here is a diagram of the distances at different times, using different time and space measurements: 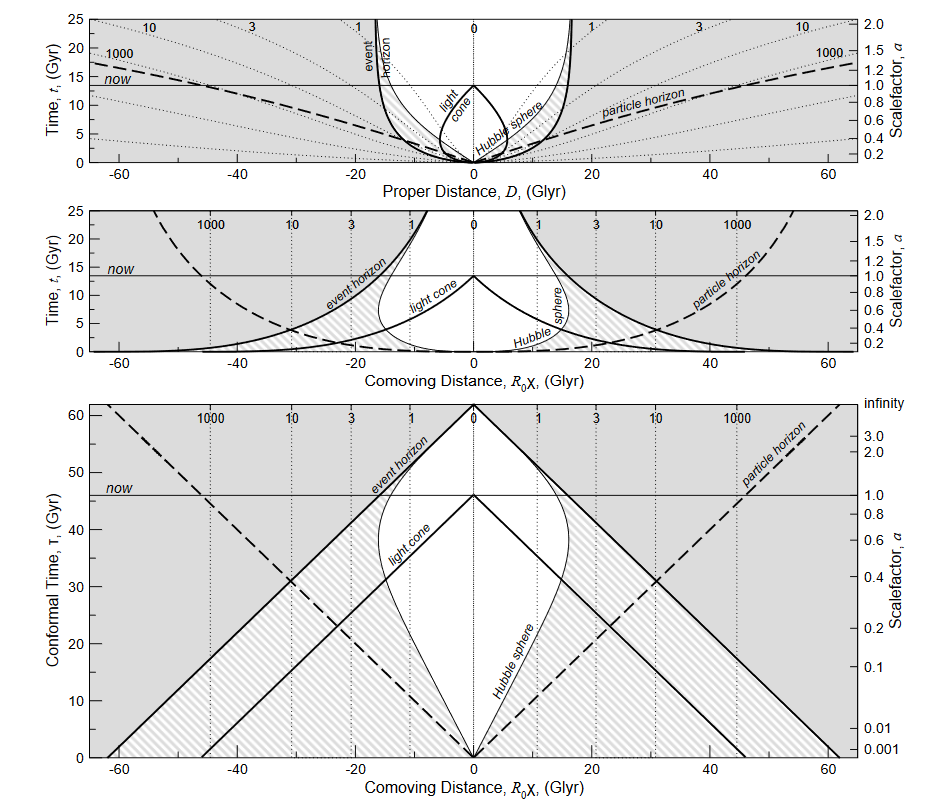 The top diagram shows space measured in "proper distance": how far it would be to a point if one could instantaneously measure it (say by putting yardsticks from here to there) at a particular point in time. The grey dotted lines represent how galaxies are moving. The light cone is what defines the current observable universe: stuff inside that shape could have sent a light signal that hit our telescopes today.

But one can also measuring space by "co-moving coordinates": most galaxies are not moving that much relative to their neighbours, so we can just imagine matter at rest in the universe and attach milestones to it. Yes, these milestones are drifting apart, but if we rescale for that we get the middle diagram. Now galaxies follow vertical lines. Now the light cone get stretched a lot near the big bang, and one can see that it hits the t=0 axis 45 billion lightyears away.

But we can be even more devious and rescale time so light is always moving as 45 degree lines. We measure in "conformal time". This has the odd effect of making the end of time, when the universe actually is infinitely old, show up at the top of the diagram (that we are 2/3rds up doesn't really mean much). The really useful thing is that now lightcones are really easy to draw. Even cooler, we can actually draw the light-cone of Earth's location in the infinite future and find the eventually observable universe, which is a tad beyond 60 billion light years wide.

Note that now Forbes makes sense: the reachability limit represents how far we can go if we set off at lightspeed. That is just a 45 degree line from the here and now point in the diagram (it is a continuation of the light cone lines to the future). It hits the top at exactly the same co-moving distance as the event horizon line hits our present: the distances are the same. The event horizon represents the maximal distance something can be and yet send a signal to us that reaches us eventually.

Of course, by the time you can finally see the 60+ billion lightyear galaxies they have moved away because of the expansion to truly unimaginably remote distances.

Not the answer you're looking for? Browse other questions tagged cosmology spacetime astronomy space-expansion observable-universe or ask your own question.