so I'm currently learning quantum mechanics in the context of a physical chemistry course. So it's not very mathematical which leads to a lot of little traps that just confuse me.

Let me first introduce the Bra-Ket Notation I'm going to use. The inner product of two complex valued functions $\varphi_m$ and $\varphi_n$ can be written as

whereas $m$ and $n$ are indices for the eigenfunctions and eigenvalues and $\varphi_m^*$ is the complex conjugate.

So that's everything we ever learned about the Dirac-Notation.

Now if we have a complete orthonormal basis consisting of the eigenfunctions $\{ \varphi_n \}$ of a operator $\hat{A}$, we can write $\hat{A}$ as an matrix:

Now, so far so good. Now consider the following problem:

So for me it's clear, that if we look at the total angular momentum, we basically look at the "union" of both other vector spaces. Now comes the actual question: What they did was the following. First they gave us the following basis: 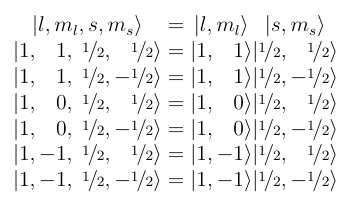 As you can see, they used

Which already confuses me. Sure it makes sense that a eigenfunction of the total angular momentum basis on the numbers $l, m_l, s, m_s$ but what does the notation $|l,m_l,s,m_s\rangle$ actually notate?

Further more, if we look at the defintion of the Bra-Ket Notation, we suddendly have 4 indices. (Sure, two are fixed and we could shorten it to $|m_l, m_s\rangle$, but there is no mention of such a thing being done.) How should I now apply the Bra-Ket Notation?

We multiply it with $|s, m_s\rangle$ and get

So that works fine. But I don't see how I could do the same thing for the spin operator. I don't know how to handle the Dirac-Notation correctly here.

I hope you see my problem. It was a bit of a big text, so let's summarize my questions:

Q3: To get the matrix representation of an operator we'd use (2). I'm confused on how to get to such an expression if we have more than two quantum numbers. How would I get the expression for the matrix?

Like you correctly understood, the total Hilbert space weŌĆÖre working with is a direct product of the form $V_j=V_l\otimes V_s$. What this means is that to specify one state in the j-space, you need to specify two states, one in each of the constituent spaces.

Not the answer you're looking for? Browse other questions tagged quantum-mechanics angular-momentum or ask your own question.