Why does this ice cube rotate when it melts on a flat platform?

I had incidentally noticed this. An ice cube that fell on the kitchen granite platform started to melt and as it melted it also started to rotate. I tried to stop it by touching it, but it starts to rotate again when I release it. I captured a video of it and it available here: https://www.youtube.com/watch?v=9B59iG_Beas

Why does the ice cube start to rotate?

I did do a rerun of this experiment with a fresh ice cube. Even after waiting for a layer of water to form under the cube, it did not rotate. Even otherwise, I would not expect the cube to move if it is directly in contact with the surface, without a layer of water underneath it, because of all the friction. All the same, I did notice something else. A bubble burst out from underneath the cube and slightly pushed it in one direction.

That brings me to think, could the rotation in the first cube be due to tiny air bubbles that formed a pattern suitable for the rotation?

Similarity with the linked question

The scenario in your case is essentially similar to the one in the question you linked. How? Because once the ice cube starts melting, the water (molten ice) forms a layer beneath the ice. So now the ice is no longer in contact with the table, but it's instead in contact with the thin layer of water separating the ice cube and the table. This layer of water is clearly visible in the video that you linked to. This ice-on-water scenario looks something like this:

So, as you'd have anticipated, the physics isn't going to change much (though there is a significant difference in this scenario, see the rest of the answer for more).

The reason behind the rotating ice cube is fundamentally because of the variation in density of water with temperature. The density versus temperature graph for water looks like this: 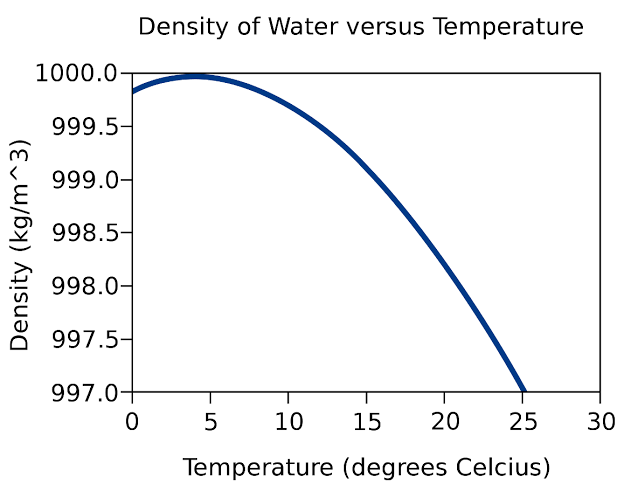 Difference between the your question and the linked question

Now, let me introduce the difference between both the scenarios that I was talking about. In the other question, the OP has put ice in a container filled with hot water. This directly implies that the surrounding hot water has lower density than water at any temperature lower than that of the hot water. So the idea of creation of vortices is easily explainable. However, in your case, the surrounding water is not at all hot, and thus the density increases with the increase in temperature, so we might not be able to extend the same explanation here as well.

Then why are vortices formed?

Is the conservation of angular momentum violated here?

The direction is as such ambiguous (and difficult) to decide in this case, but in the generic case of an ice cube in hot wwter, the direction primarily depends on the inital state of the water inside the container. If initially the water is rotating in a certain direction, then the ice cube will rotate in that direction. In this case, though, since there is no initial rotational flow already in place, thus other factors like the shape of the ice cube start dominating the direction of rotation.

To validate or invalidate the explanation I gave above, you can conduct the following variations of the same experiment.

Also, there might be a possibility that the ice cube is rotating here just because it might have been given some initial angular momentum, so it just keeps on rotating with almost the same angular velocity due to the negligible resistance provided by the water beneath it. But this is very less likely since there is no appreciable decrease in angular velocity in the video that the OP linked to (in fact the angular velocity increases at some points), so it's not quite likely that all this rotational motion is caused just due to the inital angular momentum imparted to the ice cube.

You can try out the above experiments to verify the explanation. And if anything goes wrong, please do inform me so that I can correct my explanation :-)

14
Why does an ice-cube turn faster and faster while melting in water?