Why does an ice stupa not melt for 6 months?

In this video at 3:55, Mr. Wangchuck explains that the ice stupa doesn't melt because it has less surface area for a given volume compared to other figures in geometry (being a cone). I have theorized it happens due to it having a lesser exposed surface area and hence, allowing it to absorb less radiation and heat from the sun and give off less heat by Stefan Boltzmann's law. But is this the correct and complete explanation?

I still find this extremely weird and maybe even implausible that such a stupa made of ice can stand tall for a couple of months even if it has a lesser surface area for a given volume. The temperature in Ladakh in the month of March seems to be around 20 degrees celsius and about 13 degrees celsius in February (still way above the freezing point of water which is 0-degree celsius at 1 atm pressure) and he says the stupa stands from about January all the way to May! It honestly feels like all of it should have melted away come February and not have existed as late as June as shown in the video.

An ice stupa such as the one in your video does not melt fast because it is huge. Even if you had an ice cube of equal mass, it would take about five months to melt. How did I arrive at this result?

The surface area to volume ratio of the shape matters, but the amount of energy absorbed by the stupa changes linearly with its area. As such, $t_{\text{melt}}\propto \text{area}/ \text{volume}$ for a fixed volume (and mass). In general, most shapes have this figure within the same order of magnitude and even an 'inefficient' shape would last a few months at such massive scale. Spheres have this value at $4.8$ while cubes are at 6.

Below I do the calculation and show that there is nothing mysterious happening with the stupa. I guess it would be a bit of a downer to say that in the youtube video though :)

In general, answering these kinds of questions requires one to think about all the incoming and outgoing energy fluxes, and writing them as a differential equation. In this case we have two main pathways of heating:

As an equation one can write this as:

Assuming all of these processes to be constant in time, and that all of them are melting the surface of the sphere uniformly (in reality one can guess the top to be melting away faster than the bottom).

The solution to the differential equation where the initial condition for a $2000$ ton stupa corresponds to $R(t=0)\approx 8 \text{m}$.

In order to solve the equation, we have to find the relationship between $\Delta{Q}$ and $R$. Writing the infinitesimal heat transfer $dQ$ required to melt a $dR$ thin layer of ice:

where $C_{\textit{lat}}$ is the latent heat of ice and $\rho_{\textit{ice}}$ is the density of ice. To make progress one writes the master flux equation as:

The above equation simplifies to:

In order to estimate the time until the total sphere melts we set $R(t_{\text{melt}})=0$, and find that the ball melts at:

In many ways this is the lower estimate as I assumed:

Nonetheless, this estimate shows that the stupa will be melting for a couple of months as asserted in the video. It is not much more than an order of magnitude estimate, but it proves that you do not need to look for any mysterious effects past usual heat transfers.

Reference for choice of temperatures: Temperatures in Leh throughout the year 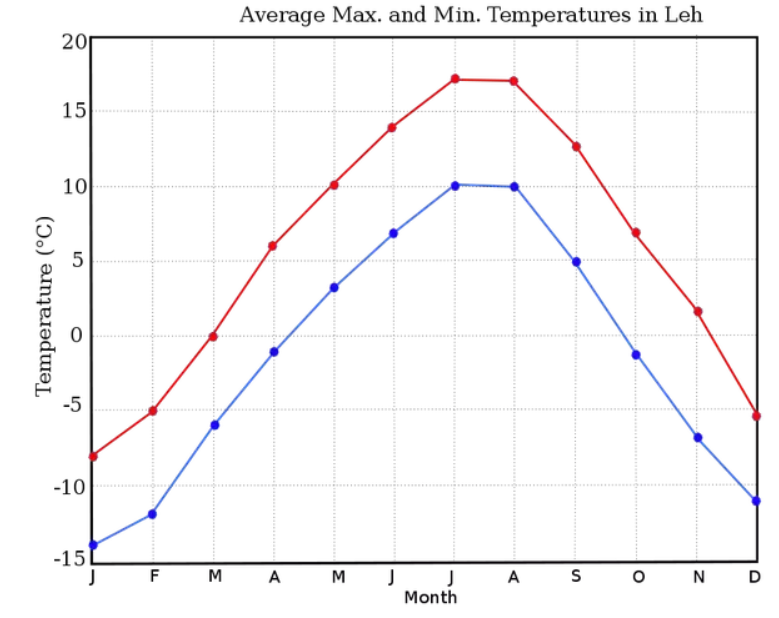 OK, it may go longer but go through it for once.

Look the stupa takes a month to form and can reach a maximum height of about $15$ to $50\,\mathrm m$ and can store up to $2$ million litres of water which is a lot.

If we calculate its mass it will be the same $2$ million kg.

Such a great mass at about $-30\mathrm{°C}$ needs a lot of energy to melt and flow in streams. If we calculate, it can reach to about 210 million joules of energy (with some approximations).

Now if we google about the average energy from the sun in Ladakh, we get this: 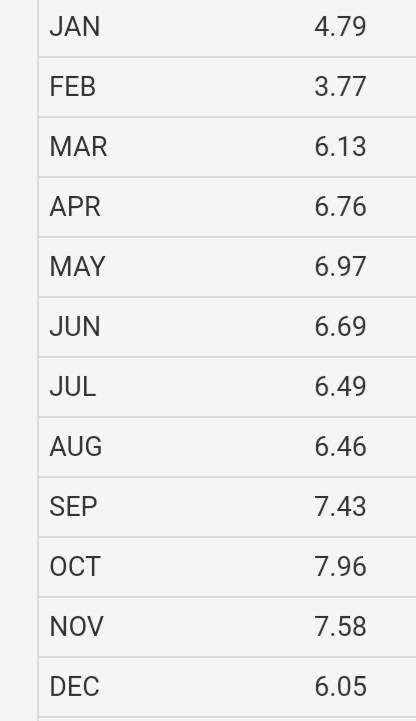 Now the curved surface area matters. Its radius ranges from $10\,\mathrm{m}$ to $20\,\mathrm{m}$ and height ranges from $20$ to $50\,\mathrm m$. So we can calculate the area as an average. And then calculate the total energy to the stupa. And from this we can get the result. I did the calculations and got $180$ days approximately. The days are calculated from January because it takes a month for the stupas to form to such a height.

So what the deciding factor in this case was it's mass and its temperature during the winters and rest of the months (shown in the figure).

Also the heat absorption happens from the warm air currents which blow in Ladakh mostly in the months of March to May also cause it to melt and as per Akerai's calculations it will take two months or more to melt it completely.

NOTE: if any query with the data then you can google it. Hope it helps. 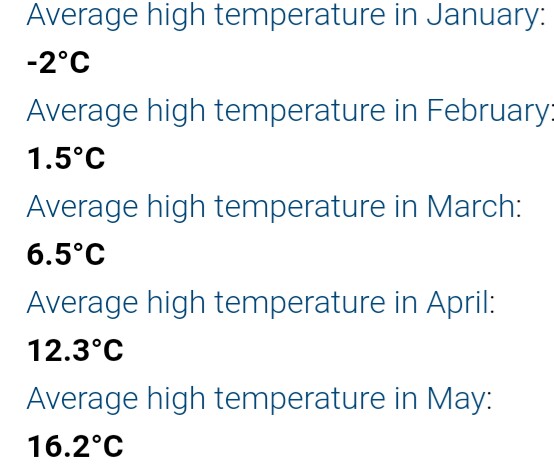 Great thanks to Akerai for informing me about my mistake.

@Ankit Kumar provide a very insightful answer on the practical side of the phenomena. I would like to give some light on the theoretical reason behind Mr. Wangchuk's statement (and a simpler way to look at it).

The stupa is made up of ice, so the way that heat from the sun (or hot air) gets absorbed and transferred by the stupa is conductance. Let's say that the stupa absorbs heat $Q$ in an amount of time $t$. Now, the heat absorbed in that amount of time (rate of heat) is going to be: $$\frac{Q}{t} = k A \frac{T_o - T_i}{d}$$ where $A$ is the area of the stupa, $T_o$ is the temperature outside the stupa and $T_i$ is the temperature inside.

Now, as you increase the area of the stupa, the heat absorbed by it in a given amount of time goes up.

You want to make sure that you maximize the mass of ice stored in the stupa and minimize the heat absorbed by it. This would make sure that it lasts longer. Since mass depends on volume ($M = \rho V$; $\rho$ is the density), you basically want to get the surface area to volume ratio as low as possible (to ensure lower surface area for absorption and conductance; and increase volume and mass).

Mathematically, the lowest surface area to volume ration is that of the sphere (or, as Mr. Wangchuk says, the hemisphere: you don't want to build a huge snowball :). But, when you consider how they construct the ice stupa, it makes sense: they release water from vertically-oriented pipe and when the water is exposed to the chilly climate of Ladakh, it freezes, eventually, forming a cone.

The cone has a surface area of $\pi r l$ (not considering the circular bottom surface) and a volume of $\frac{1}{3} \pi r^2 h$; that makes it one of the figures to have the lowest surface area to volume ratio (not as low as the sphere though).

To sum up: ice transfers heat through conducting it, and the way to minimize the heat absorbed and conducted is to minimize the surface area, and to maximize the amount of ice you need the maximum volume. So, a shape having less surface area for a large volume, in the case of this project the cone, is used. It is jus because of the conductance phenomena. You don't even need the Stephan-Boltzmann law for this one.

Not the answer you're looking for? Browse other questions tagged water phase-transition geometry thermal-conductivity ice or ask your own question.

9
Does ice made with hot water melt faster than ice made with cold water?
0
Do ice balls in whiskey really make sense?
1
Ice melting equation units don't match?
8
How does ice melt when immersed in water?
0
Why can't I equate thermal current at the point?