Effect of water on wobble of rotating structure

If we have a structure that rotates to create artificial gravity, then if the mass isn't perfectly distributed along the circumference the CM will be offset from the geometric center so there will be a wobble.

I made this illustration, to show the wobbles that happens becuse a person goes to visit his/her friend on the opposite side of the structure. 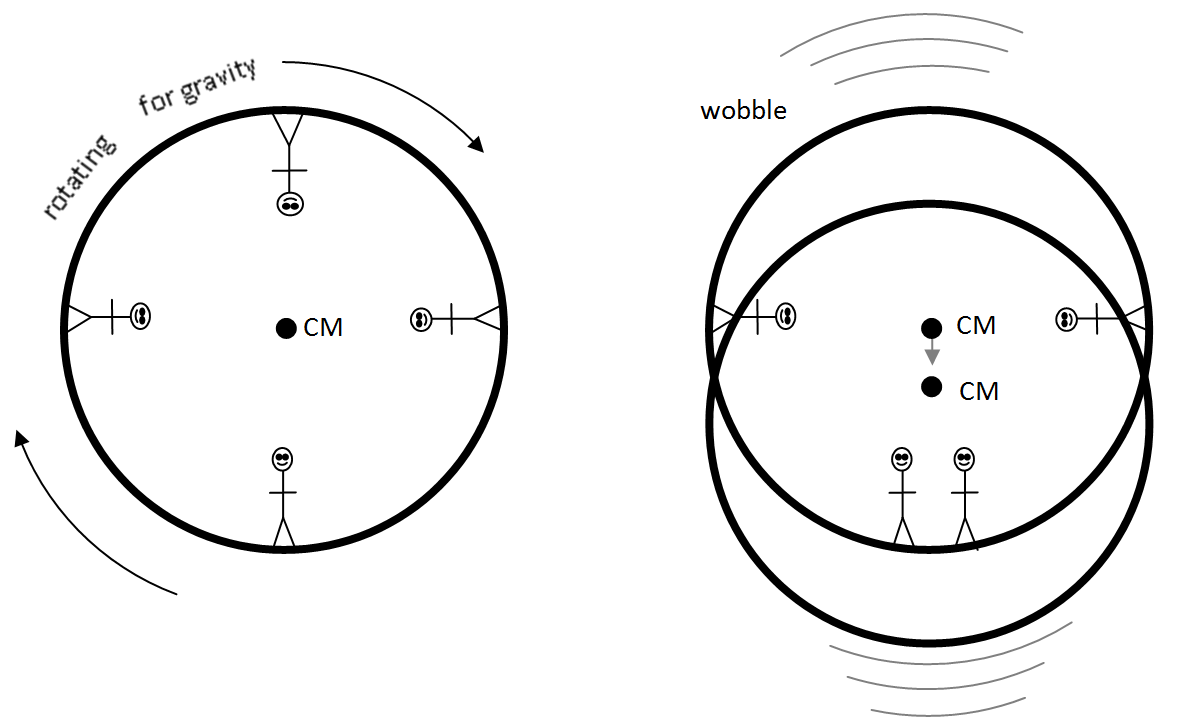 Some artist conceptions include water in the forms of lakes, and are often contiguous bodies of water that circle the entire circumference (Bernal sphere example). If we assume there is a free-flowing body of water around the entire circumference like this (and is sufficiently deep), then it's clear that water will move as a result of a mass movement since the previous water surface is no longer equipotential. This will also move the CM.

How would the presence of water affect the wobble?

The system CM is the only thing we can identify that is truly inertial. Make that the origin.

It should also be noted that the CM is a combination of the mass-weighted CM of all the components. Those components are:

The last point is absolutely crucial, but let's sum up the entire course of events. The man moves in the negative y-axis direction (down). Since the system CM remains in place, the CM of the (structure + water) moves in the positive y-axis direction (up). We can guess that the rigid structure moves "up" as in the OP illustration. As we imagine that, the lake floor moves but the surface doesn't. That means the lake's mass moves "up" - the same direction as the structure. From this information alone we conclude that the wobble is lessened by the presence of the water. Let's go deeper into the dynamics of the water.

The water is an annular region. As the rigid structure moves up, the outer edge moves up, making the annulus into a shape like a crescent moon. 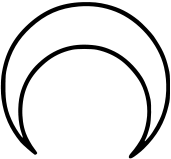 Ce n'est pas une réponse. (Where are the hydrodynamicists?)

Have you considered the possibility of "tsunamis"?

Gravity waves have an approximate wave velocity $v_w = \sqrt{gh}$, with $h$ the water depth and $g=v_s^2/R$ the radial acceleration (of a cylindrical shell with radius $R$ and wall velocity $v_s$).

The question is whether a particular standing wave pattern could become resonant and extract energy from the rotating shell to increase the wave's (and the wobble's) amplitude.

I have no idea how to figure that out.

Not the answer you're looking for? Browse other questions tagged fluid-statics stability centripetal-force or ask your own question.

5
Is mid-water bouyancy a classic example of a balanced but unstable system?
5
Shape of a rotating fluid surface
0
Water in a glass on a rotating disc
1
What construction materials could enable a capillary effect to raise water?
0
Object rotating in a circle without rope
1
Effect of increased air pressure on water pressure in sealed container
1
derive the density of water from its molecular structure?