I offer my colleague some milk in her coffee. The milk has just come out of the fridge.

"Not now," she says. "Not till after I've finished my sandwich, and I don't want it to go cold."

So: identical mugs and quantities of hot coffee and milk at same temperature; only difference is that the cold milk is added — straight from the fridge — immediately in one case and five minutes later in the second one.

My guess is that my colleague is mistaken, and that after the five minutes are up, and the milk added to the second one, that the milky coffee in it will be colder than in the first.

The question is an old conundrum and can be found in various guises on the Internet and in handbooks. One can summarise it as follows:

If I add milk to my coffee and wait 5 minutes before drinking it and another person waits 5 minutes and then adds the milk to his/her coffee, who is drinking the hottest coffee?

A theoretical derivation of the end temperatures can be carried out based on the following assumptions/simplifications.

A derivation based on the above is tedious and shows both end temperatures to be very close together. But the derivation is also useless for providing a definitive answer (but it can be useful to provide insights into the cooling process) because critics can always point to one or more of the assumptions not being met in reality. Further refining the model will likely not quell such critiques.

For those reasons a well designed experiment with sufficient replication (to allow statistical analysis) would be more interesting and insightful.

This experiment (with tea and milk) seems to show that immediate addition of the milk gives the warmest drink: 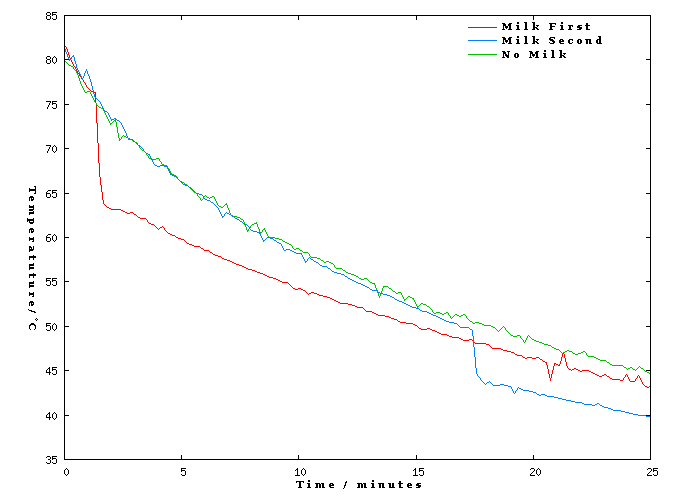 But the experiment is far from perfect, especially because of the lack of replication.

And this simplified derivation, based on Newton's Law of Cooling finds the same. But it too is very open to well-reasoned critiques. It certainly relies on one rather questionable assumption.

And here's my own experiment. Experimental protocol is summarised at the end of this post.

I tracked both methods of drinking coffee over a $15\mathrm{min}$ period of time. At the end I found the coffee with immediate addition of milk to be about $8^\circ$$\mathrm{Celsius}$ hotter than when the milk was added at the end of the run. Even without replication that's likely to be highly significant.

The dimensionless temperature $\Theta$ v. time plots are quite revealing, Series $1$ is with immediate addition of milk, Series $2$ with addition at the end: 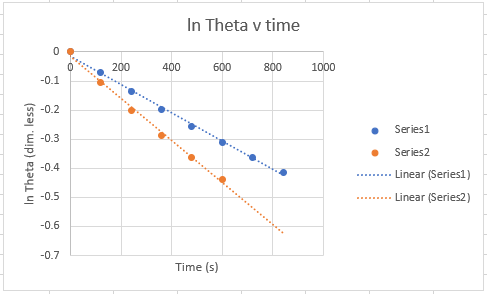 A possible cause of the difference in cooling rate may lay in the factor $A/m$. For a cylinder with (constant) radius $R_0$ we found:

As $m$ goes up, $A/m$ comes down and so does $1/\tau$ and the cooling rate. Surely a bucket of hot coffee would take longer to cool than a mere cup?

So maybe what we're observing is a mere mass effect.

The influence of the $A/m$ ratio on cooling rate was investigated empirically as follows. 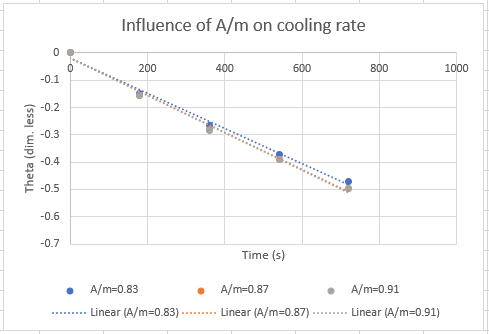 Here the effect of $A/m$, although still present, is much smaller than in the first run.

Could the larger difference in cooling rate be caused by using milk? Milk has a lower heat capacity than water because it contains fat. That would increase $1/\tau$.

3
Would a Cup of Tea Be Hotter If you Add the Milk Before or After Boiling Water?

3
Is the cooling rate of a (very) cold object, sitting next to an AC higher or lower?
1
Is it possible to “add cold” or to “add heat” to systems?
4
Why do some beverages stay cold longer than others?
1
How does the entropy change during the cooling of a hot coffee in a cold cup?
2
Thermal energy of a system
4
What is the temperature of water at the end of the pipe?
0
Chardonnay, air versus water
0
When is it more efficient to blow air over a wet laundry in order to dry it - when it's wetter or when it's drier?
1
Is it possible that an instant coffee 3 in 1 (or any other type of coffee) is cooling faster than tea?