The following is an improved version of my previous post Falling electric dipole contradicts equivalence principle?

Consider the following system comprising a particle on the left with charge $+q$ that is a large distance $d$ away from two oppositely charged particles on the right, with charges $+q$,$-q$, held apart by a spring of length $L$ and spring constant $k$. 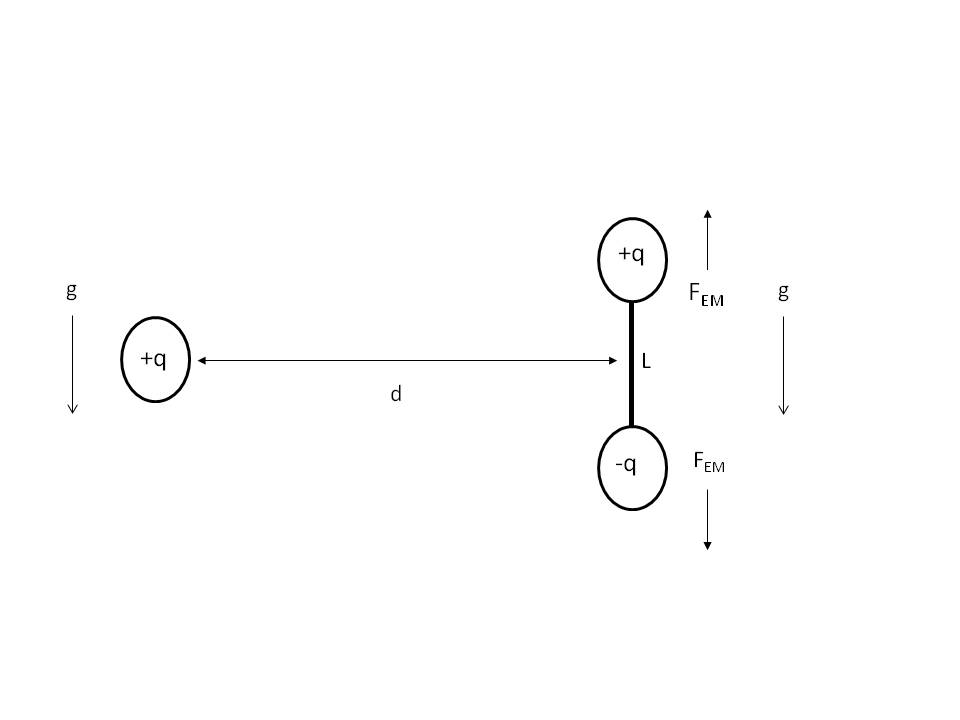 Let us assume that the left-hand particle is sufficiently far from the right-hand particles so that the "static" horizontal component of the electric field that it produces near those particles is negligible.

To start with consider the system at rest in empty space. The only electric forces acting on the right-hand particles are "static" attractive forces that are balanced by the compressed spring.

Now let us assume that the whole system is falling in a gravitational field with acceleration $g$. According to the equivalence principle this situation should be locally indistinguishable from the system in empty space.

But now as the left-hand charge $+q$ has an acceleration $g$ it should produce a "radiative" vertical component to the electric field in the vicinity of the right-hand particles.

As the forces on the differently-charged right-hand particles point in opposite directions, the spring is stretched by an amount given by

Thus a local observer can tell that he is falling in a gravitational field which contradicts the equivalence principle.

The outcome of any local non-gravitational experiment in a freely falling laboratory is independent of the velocity of the laboratory and its location in spacetime.

The essential word here is local. The field of a charge has infinitely long range. The effects like “radiation reaction” are based on the long range behavior of fields and are thus entirely non-local and depend on the structure of space time on scales of at least $\ell_\text{R}= c^2/g$ (which could be interpreted as a distance to Rindler horizon). But if it is the gravitational field that causes the acceleration, then the spacetime on such scales would be noticeably curved, and the EM field of a charge system would be modified by this curvature. As a result, if the observer can measure variations of the force at the level of radiative corrections, then this observer can indeed distinguish between empty flat Minkowski spacetime and a curved spacetime.

Not the answer you're looking for? Browse other questions tagged electromagnetism general-relativity equivalence-principle or ask your own question.