How can all particles of a rigid body have identical angular velocity when their position vector is not perpendicular to the axis? 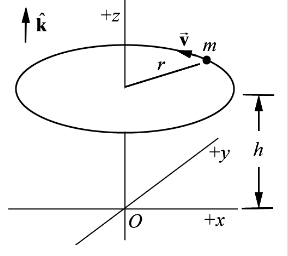 Every source I can find on the internet claims that angular velocity is the same for very particle of this rigid body, but at the same time it is given as the cross product of its positional vector (in relation to the origin) and its linear velocity vector [divided by the squared radius] (edited):

To answer your question, the angular velocity of any constituent particle in a rotating rigid body is calculated from a perpendicular displacement from the rotation axis, and not from an arbitrary choice of your coordinate system's origin.

If it were the latter, then any angular velocity could be ascribed to that particle by a suitable choice of origin. And since the dynamics of a rotating rigid body are independent of coordinate system, the angular velocity vector cannot be so constructed.

More intuitively, angular mechanics is at its essence an evaluation of motion in terms of pure circular trajectories, as opposed to linear mechanics in which motion is evaluated in terms of straight-line trajectories. As such, the angular velocity vector encodes the idea that the particle moves in a circle in its very construction. Were you to take a single particle at position $\vec r$ and imparted a velocity $\vec v$, then without constraint the particle would move linearly (along a trajectory $\vec{s}(t) = \vec r + t\,\vec v$). If the particle were fixed to stay at locus $r$ from the origin $O$, then it would rotate about $O$. The rate of rotation is given by the angular velocity $\vec\omega = \vec r \times \vec v/ r^2$, which simply calculates the component of the velocity vector perpendicular to $\vec r$ as the velocity that is pertinent to circular motion: $\vec \omega = \vec r \times \vec v/ r^2 = \frac{v \sin\theta}{r} \hat\Sigma$ (where $\hat \Sigma$ is a basis vector perpendicular to the plane of motion; in fact, you can interpret this $\hat\Sigma$ to define your plane of motion). Thus, whenever angular velocities are calculated it is always the displacement from that centre of the circle that the particle will move along that is used (or, equivalently, the perpendicular displacement from the rotation axis), since the whole point of $\vec \omega$ is to describe motion about that point.

The equation $\vec v =\vec\omega \times \vec r$ applies to particles moving in circular paths about a common axis. $\vec \omega$ is the angular velocity of each particle about its own circle centre (a point on the axis). It is therefore a vector of magnitude $\omega$ parallel to the axis.

I first came across the equation, used in this way, in Kibble: Classical Mechanics. I was confused at first because $\vec \omega$ is not (in general) taken about the same point for different particles, nor (in general) about the point on the axis from which the displacement is measured! But as long as you realise this, it all makes sense!

Not the answer you're looking for? Browse other questions tagged rigid-body-dynamics angular-velocity or ask your own question.