Long story short,
how can I qualitatively explain what is the Lorentz transformation and why it does so?

I am looking for a description of its general behavior instead of "it works due to an XYZ mathematical equation".

Long story,
I am reading a famous book about Special Relativity

The ABC of Relativity
by Bertrand Russell

I am looking for the second, a human explanation...

The rest is math. If you start from those two intuitive principles and work out the math, then what comes out is the Lorentz transform. But that is nothing more than the mathematical consequence of the two intuitive postulates.

It is always important to have the physical interpretation of what we learn in Physics. The Lorentz transformations are the generalised version of Galilean Transformations in Relativistic motion. The equations say that space and time are not something fixed rigidly, rather they are abstract notions, which are treated on the same footing. They describe that the universe does everything it can to keep the speed of light a scalar in inertial reference frames. Note that scalar means the quantities that are invariant if reference frames. "Space and time are but a stubborn illusions". The rest is all abstract mathematics, which describe reality of the Universe

I don't know if this has been addressed in other answers, but I will still give it a try, in a simplistic manner, without math, without definitions, in short a layman's guide to Relativity.

The vertical axis represents time. The horizontal axis represents space. If you have any event (shown in red), it will happen at one point in space and at some point in time. So, basically, an event is a point in this diagram, with co-ordinates of space and time. An object which is moving is described as a line in this diagram, and the slant of the line is the speed of the object ($\frac{space}{time}$). The blue line represents the speed of light, $c$. Nothing goes faster (has a line on the bottom-right) than light.

Now, this is the spacetime diagram when you are at rest (according to you). But, what if I start moving; then how will I see you? You will be moving, according to me. But, there is a catch (apparently, there always is :-). My spacetime diagram, gets 'warped' or rather 'bent'. It's better explained visually:

But, this axes bending has some constraint: namely, the blue diagonal line, the speed of light should not change in my new space-time co-ordinates. This is the Lorentz transformation. It transforms my axes of spacetime, to match my viewpoint of things, in a way that the laws of relativity hold.

That is, qualitatively speaking, the Lorentz transformation. It takes every point in space and time, and transports it to some other place in the diagram. It just shifts the co-ordinate system (the axes), to match the viewpoint of someone who is travelling at a speed $v$, in turn 'shifting', every point i.e every event. It is just a means to know what, where and when something is happening according to the point of view of moving people.

APPENDIX: For the math-hungry people:

Just a little bit of math for those of you interested. (I will links in below to whatever I am saying). How exactly do the axes bend for moving observers, i.e. how does the Lorentz transformation work?

So, in linear algebra (links below), whenever you have a change of co-ordinate systems, you describe it using a matrix. In this case, the matrix (for the Lorentz transformation in 2 dimensions) is:

where $(t', x')$ are the co-ordinates in the new co-ordinate system. So, the observer sees the point $(t, x)$ at $(t', x')$. So, how do you find out how the coordinate axes bend? You don't need to: as soon you have the matrix $\Lambda$, you can figure out everything about the new axes without having to do all the calculations at all! That is the brilliancy of linear algebra. But, if you are still up to it, you can always try and first set $x = 0$ and solve the above for particular values of $t$ and vice-versa.

A brilliant series on linear algebra by 3blue1brown: https://www.youtube.com/watch?v=fNk_zzaMoSs&list=PLZHQObOWTQDPD3MizzM2xVFitgF8hE_ab

The principle of relativity is that all inertial frames are equivalent. You can think of this as asking the question "If I am in a closed box with no windows, can I tell if I am moving at a uniform speed, or not?", with this principle giving the answer "No, you cannot", since all general laws behave in the same way.

Einstein states this in slightly different ways throughout his book Relativity: The Special and the General Theory. Below is probably the easiest to follow.

The constancy of the velocity of the propagation of light is then introduced. This appears to contradict the principle of relativity under classical mechanics though.

(Read more on this idea in the chapter on: "The Apparent Incompatibility of the Law of Propagation of Light with the Principle of Relativity".)

So this is where the Lorentz transformation comes in.

Formally, the law of the addition of velocities, although it is intuitive, can be derived from the Galilei transformation, seen below.

But Einstein theorised that the Lorentz transformation, seen below, is a better explanation of reality (this was later shown to be true, based on Fitzeau's experiment and others).

According to this set of transformations, the formula for the addition of velocities can be shown to be

instead of simply $a+b$.

So, if we take $a=c$ and $b=-v$, in accordance with our previous example, we get the speed of light relative to the train as

Which shows that the Lorentz transformations are in line with both the principle of relativity and the law of the constancy of the speed of light!

So, in answer to your question

How can I qualitatively explain what is the Lorentz transformation and why it does so?

Experience has led to the conviction that, on the one hand, the principle of relativity holds true and that on the other hand the velocity of transmission of light in vacuo has to be considered equal to a constant c. By uniting these two postulates we obtained the law of transformation for the rectangular co-ordinates x comma y comma z and the time t of the events which constitute the processes of nature. In this connection we did not obtain the Galilei transformation, but, differing from classical mechanics, the Lorentz transformation.

Einstein's key insight is that the notion of simultaneous cannot be reliably defined in two different frames of reference. Let's say for instance you want to set up an experiment to determine whether or not two clocks tick "at the same time". If the two clocks are in different reference frames, say one clock is on earth and the other in a spaceship, then there is no way to know what "at the same time" means, without some from of communication between the two (say, via light signals). So the concept of simultenuity is not a given; it must be defined. Einstein defines simultenuity in a relatively straightforward way. Send a light signal between the clocks and determine if $t_3 = t_2 - t_1$. This synchronization convention is called the Poincaré-Einstein Synchronization. 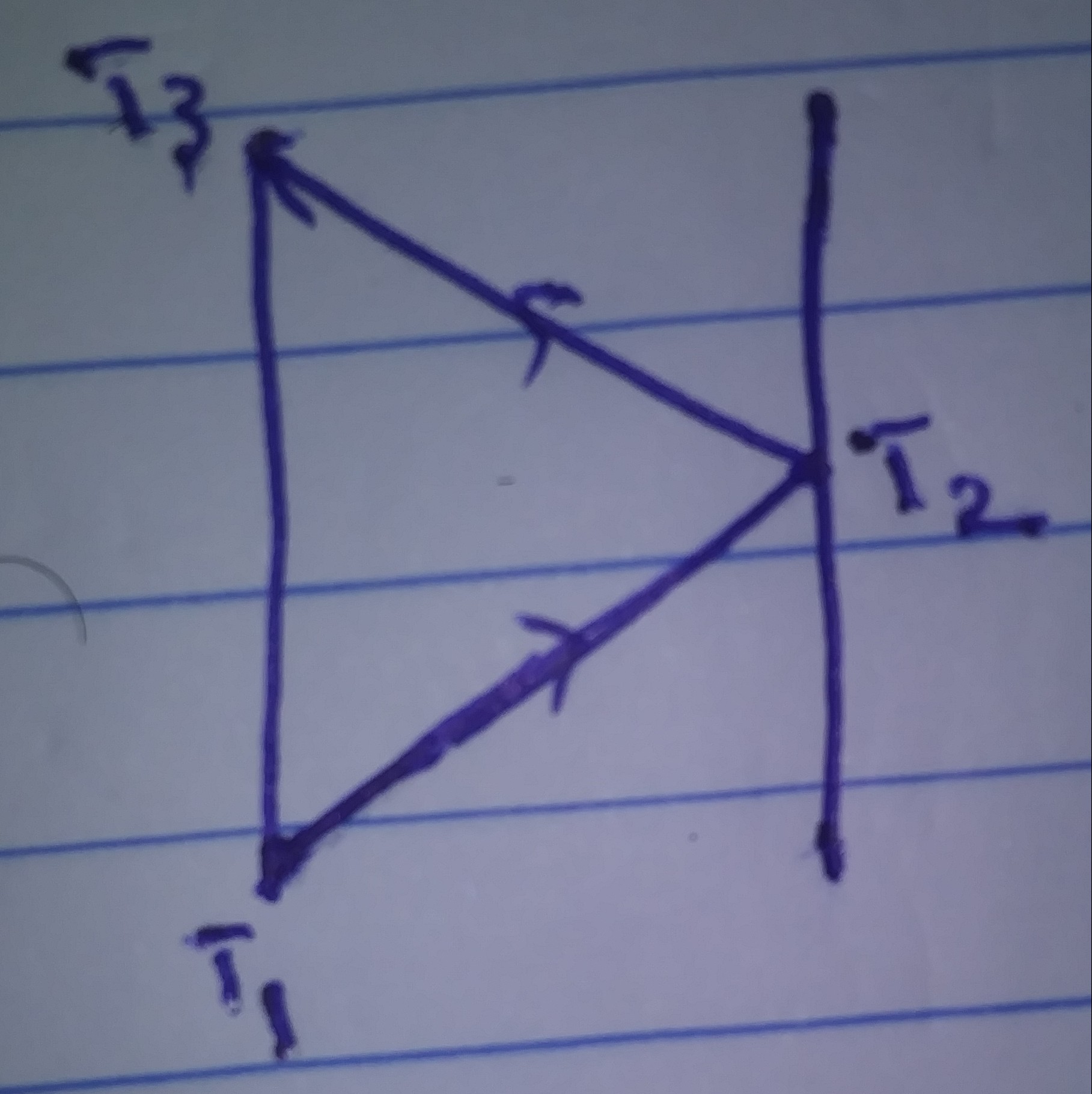 The second important insight is the realization that many concepts that we often think of as fundamental, depend on the notion of simultenuity. A simple statement like "The train arrives at 7:00pm" is really saying "The train's arrival and the pointing of the hour hand of my clock to 7 are simultaneous events". So the concept of time, fundamental as it seems, depends upon the definition of simultenuity.
The same is true of length. In order to measure the length of a moving object, we must know that the two ends of the object are simultaneous with the ruler. A third insight by Minkowski(1908), is the realization that every object has its own time, we now call this the proper time. If we draw time for a stationary object as been on the vertical axis. 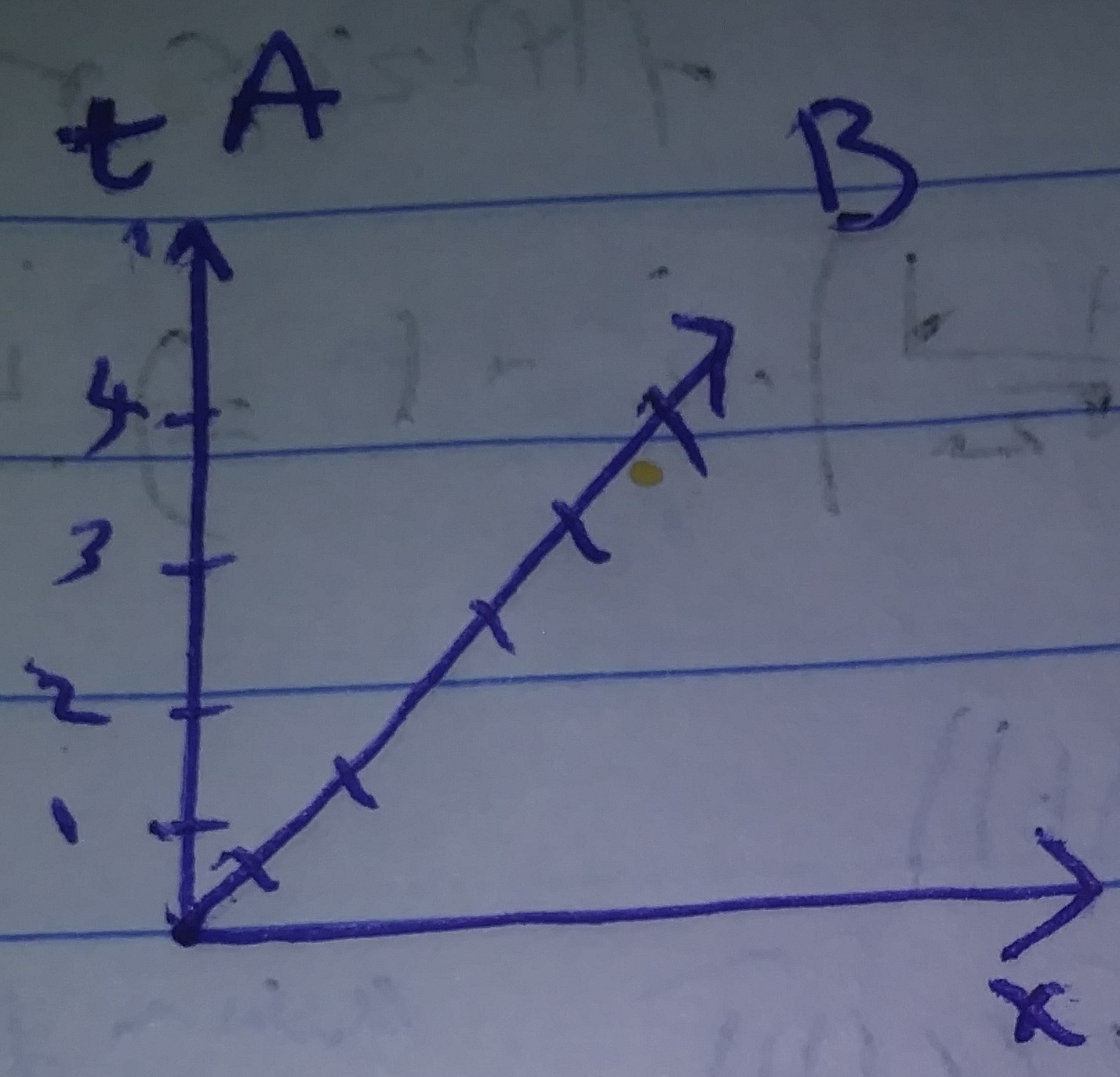 Since simultenuity is relative, each clock can tick at different rates. So the ticks on the vertical clock(A) do not have to line up with the ticks on the diagonal(B). This is very analogous to the situation in geometry. If the ticks represented the length of an object, then we would need the Pythagorean theorem to calculate lengths on the diagonal ($x^2+ y^2 = z^2$). Similarly Minkowski derived a way to calculate time of a moving object. We now call this the Minkowski metric. $\tau^2 = t^2 - x^2$. He found this by the fact that $c$ is invariant in all reference frames. He also worked in units where $c=1$.