Do electrons have definite and single value of momentum and position?

Consequently, assuming it's just impossible to measure the exact position and momentum, does this mean that in atomic orbitals the electrons actually do occupy single position at a certain time (instead of somehow having 'smeared out' multiple positions at a time). How does velocity apply to atomic orbitals? Do electrons just randomly teleport according to the probability distribution or do they actually travel in 'normal' trajectories (going step by step instead of teleporting, for example footballs travel in step by step and don't randomly teleport AFAIK)

Edit: Also, does $\hbar$ in the uncertainty principle equation, $\Delta x \Delta p = \frac{\hbar}{2} $ arise from Planck length (From my understanding, the impossibility to measure the exact position and momentum arises from the quantization of length and time. Is my understanding correct?)

Here is an event with three electrons and two positrons in a bubble chamber picture. 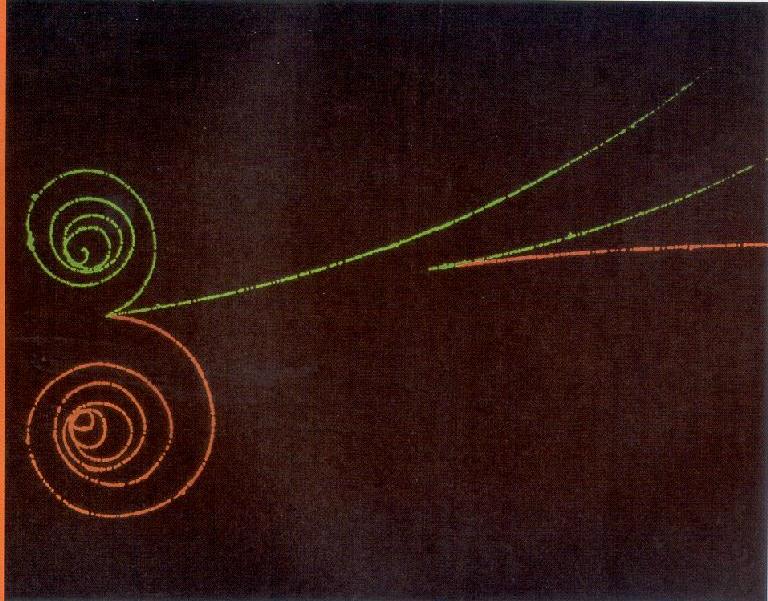 We know the position of the electron at the vertex with micron accuracy and its momentum from the curvature of the magnetic field with some measurement uncertainty. The delta(p)*delta(x) satisfied the HUP because h_bar is a very small number.

Were we able to measure the position with an accuracy of 10^-10meters we would be in the atomic world and the HUP would hold for the electron. with h_bar of the order of 6.5*10^_16eV*second we would still be ok with HUP for the momenta in these interactions.

The HUP is constraining when the orders of magnitude of x and p are both of atomic dimensions .

When one is in the dimensions where quantum mechanical dynamics holds one cannot think of particles as billiard ball analogues or of waves as water wave analogues. These electrons we see in the picture are "entities" described by Quantum mechanical solutions to the dynamics of the problem that we identify macroscopically as "electrons", in dimensions where h_bar is to all intents and purposes of measurement zero.

The quantum mechanical solutions tell us that electrons , i.e. entities that we can kick off as we did in the picture, are in orbitals around the nucleus of the atom, and have very specific quantum numbers and quatized energy; and these quantum numbers come from the solutions of the QM equations of the problem, and they identify orbitals for the electrons. If the atom is undisturbed there is no way to identify the location of an electron entity except by the mathematical solutions to the problem.

The shapes of the first five atomic orbitals: 1s, 2s, 2px, 2py, and 2pz. The colors show the wave function phase. These are graphs of ψ(x, y, z) functions which depend on the coordinates of one electron.

That is all we know, the interaction crossection probabilities, as is the case in the picture. It has no meaning to ask about an exact position of an electron, because the QM entity that manifests as an electron macroscopically can only be localized by probability functions: what is the probability to find an electron at a specific (x,y,z) if probed with a photon, for example.

According to the uncertainty principle, exact measurement is not possible because the respective quantity just does not have an exact value. It is a common misconception that quantum uncertainties are due to technical limits but according to the theory this is not the case.

Furthermore, your understanding is partially correct. The mathematical uncertainty relation can be derived from expressions for hermitean position and momentum operators, which are part of the quantization procedure. However, there is no corresponding operator for time, hence it cannnot play a role in the formulation of position/momentum uncertainty.

In the old days people thought that electrons are just like little spheres, that occupy well defined positions in space and have well defined momentum. They thought that they could apply the Newtonian laws of mechanics to an atom and workout, in detail, properties such as energy, momentum and position etc like they did very successfully with the planets moving around the sun.

These efforts failed miserably, however, as the results of the calculations gave answers that made no sense when compared with the experimental results. The discrete energy emission by the hydrogen atom could not be explained or produced by the laws of Newtonian mechanics. So there was something wrong about the assumption that electrons must behave like little balls.

To make things worse, Davisson and Germer did an experiment in which they fired electrons against Ni crystal and, to their astonishment, they found that the way electrons pass through the crystal is very much like light (X-Rays) pass through a crystal. In other words the electrons displayed wave behaviour! This result was reconciled with the notion of waves, from earlier work done by De Broglie, who had proposed that matter, in the form of particles, should also display wave-like behaviour. Therefore it become obvious that the ideas of particles with well defined position, momentum, energy etc were not supported by the experimental evidence.

All these indicate that:

No, electrons and all other particles of nature cannot be assumed to have well defined position and momentum prior to a measurement or interaction.

The development of Schrodinger equation, which encapsulates the old Bohr theory of the hydrogen atom and de Broglie's hypothesis, gave an excellent account of all of the observed behaviour of matter, and therefore we have come to realise that we can only talk about probabilities of finding a particle at some position in space. Indeed, we can only talk about the probability for any event happening. Even for electrons in an atom we cannot say that they occupy discrete positions as they move around the nucleus and that they have well defined momentum.

Despite this, the results of our calculations agree with the observed behaviour of particles extremely well!!

In conclusion: Electrons do not occupy well defined positions in space, and they do not follow well defined paths as they go from A to B. As an electron moves from A to B, it does so without following a particular path, so it cannot be in a particular position at any time. The electron , can only be represented by a probability wave, and follows a multitude of paths with varied probabilities in order to go from A to B. If we do our calculations by ignoring some of the paths because we might think they are impossible, our results simply do not agree with observation!

Hence the electron is not teleported from A to B, it is simultaneously everywhere, including A and B.

Not the answer you're looking for? Browse other questions tagged heisenberg-uncertainty-principle or ask your own question.