Can a fan cause a liquid to cool below room temperature?

I enjoy the occasional hot drink, but place it below a small fan in order to cool it to a drinkable temperature. Unfortunately, as expected, I commonly forget about my drink, and it ends up very cold.

In fact, it ends up so cold that it feels much colder than I would expect given my relatively warm room ($\sim \mathrm{25^\circ C}$). However, this could be an illusion caused by room temperature still being less than body temperature, or the mug being fairly cold.

I’m wondering if the fan is able to cool the liquid below room temperature. I’m aware that evaporation works on the warmest molecules, and leaves the remaining liquid cooler, but I’m not sure that it can ever become cooler than the surrounding air temperature? 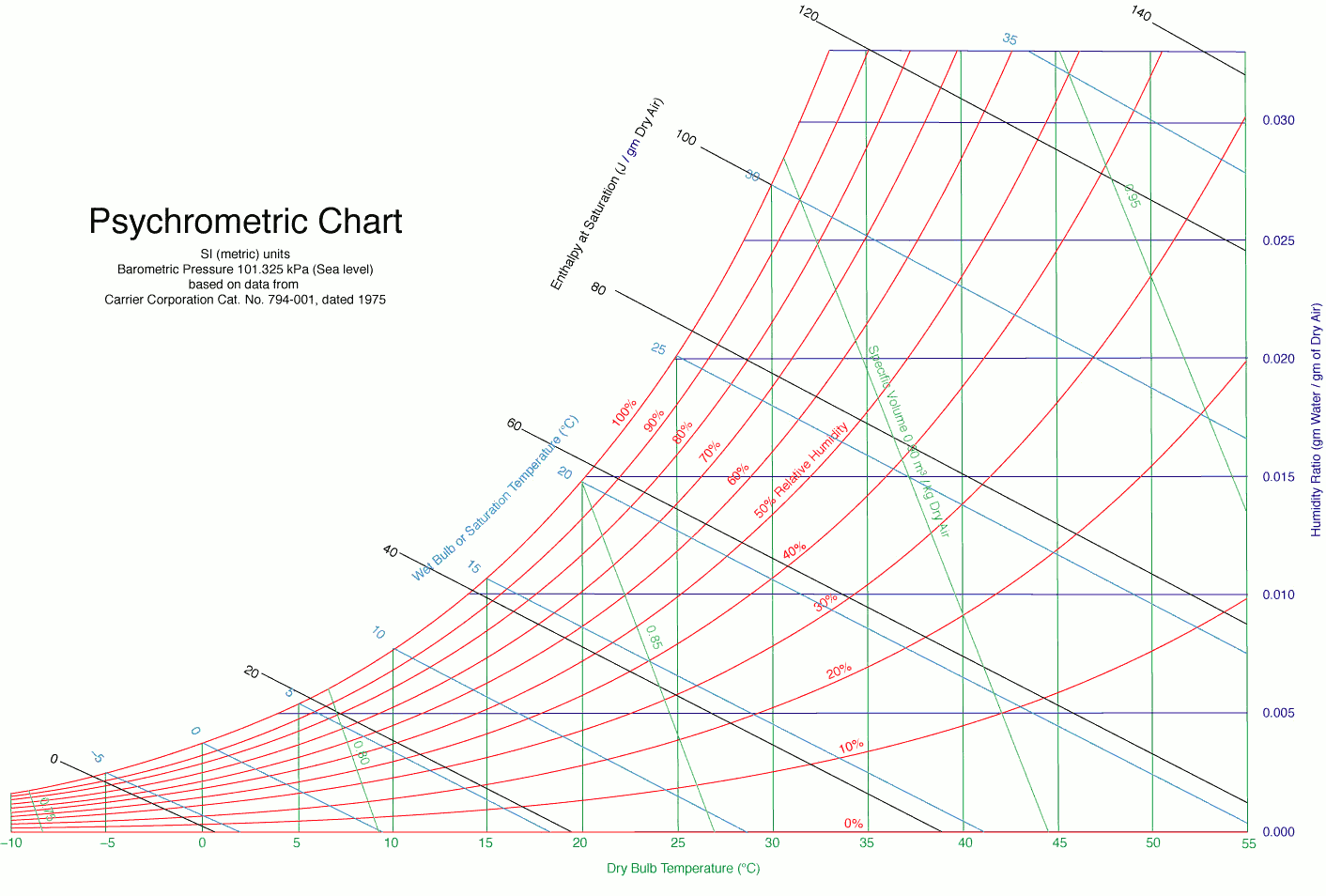 This does not necessarily mean that your drink will reach that temperature. It may require a large air flow, a large evaporation surface, and considerable time to actually reach the wet bulb temperature.

Yes, it can become cooler than room temperature. The fan blowing on the liquid surface acts like the evaporation stage in a refrigerator. There's no recycling of the vapour by condensation as in a refrigerator, but that's clearly not important here!

It's no doubt possible even to freeze the liquid, but this is more easily demonstrated by blowing air at room temperature over a volatile liquid such as ether to freeze a small amount of water. [Safety warning: Don't try this except, possibly, outdoors and with extreme caution; ether is highly flammable and an anaesthetic.]

No need to worry, though, about the laws of thermodynamics: this is not a self-acting cyclic process and the second law is not violated!

There are two types of liquid i.e. volatile & non-volatile liquids. Consider two cases for these liquids

Case 1: Let the liquid be volatile say water. The liquids are mostly volatile. The fan blows air over the liquid surface. This makes the liquid to evaporate & taken away in form of vapors by blowing air. In this process, the liquid molecules on free surface of liquid takes enthalpy of vaporization partly from neighing molecules and partly from blowing air to change in vapor. This results in heat extraction & cooling of volatile liquid and also possibly partial cooling of blowing air depending on temperature of liquid. The minimum temperature that a volatile liquid can achieve is the Thermodynamic Wet Bulb Temperature (TWBT) of ambient air. This is one of reasons why water (i.e. abundant volatile liquid with high enthalpy of vaporization) is used in water cooling systems.

Typically a convective boundary condition is of the form $$ Q = h \cdot A \cdot (T(t) - T_\text{env}) = h \cdot A \cdot \Delta T(t) $$ (where h can be a function of fluid velocity if necessary) so it is not really possible that heat can be transferred past the environmental temperature(if T is bigger than Tenv we have cooling if the reverse we have heating). Reading the other answers here there is a endothermic reaction of evaporation here that is the cause of cooling below the environmental temperature. Raoults law states that at equilibrium $$ x_i = \frac{y_i p_\text{total}}{p_i^\star}$$ so the relative humidity is basically a measure of how far from equilibrium we currently are. By blowing air past a volatile liquid we keep it further from equilibrium (faster reaction)and speed up the endothermic reaction causing more heat loss

A quick explanation of how evaporation cools your coffee. Let's assume that enough time has already passed so that the coffee is at room temperature. How can it get even cooler?

Although the coffee may be at room temperature overall, not all of the molecules will be at the same temperature. Some will be hotter (have more energy) and some cooler (less energy) so the overall temperature is just an average.

The molecules that break free of the liquid and evaporate will tend to be those that have the most energy. If those molecules escape completely then the average temperature of the coffee will obviously be less than it was before (as you have taken away some of the hottest molecules).

The escaping molecules will heat up the air around the coffee making it more likely that some of the escaped heat will simply be returned back into the coffee by conduction, but using a fan (and also convection) will help remove that heat from the vicinity, so helping prevent this. Overall there is a continuous flow of heat away from the cup. The room heats up slightly as the hot molecules are added to it and the coffee cools down.

In the case of an air conditioner, the liquid that evaporates is kept in a closed system. The liquid is forced to evaporate (which cools it) and then the gas is condensed (which heats it up). The two processes are done in separate parts of the system, so that the cold part has air passed over it that cools the house or car and the hot part has air passed over it that takes the excess heat and blows it out into the environment.

Other answers here are interesting, but here is a simple version, without formulae.

Consider the hypothetical situation that the drink has already cooled to reach equilibrium, ie it has already cooled to room temperature of 25C. The fan then facilitates evaporation of one more water molecule, which will be one of the more energetic (hotter) molecules. So the drink now has a lower mean temperature, just below 25C. So that answers the question, but more interesting ...

I don't see how it can be cooled below room temperature.

But if the environment is dry and large enough, the fan can remove molecules from the liquid, increasing the water vapor content in the air. In that process, the air may cool, transfering energy to evaporate the water.

Eventually the room can be cooled. As a consequence the drink can reach temperatures below the previous room temperature. But the effect will probably be negligible. Normally it is necessary special nozzles to produce a fine water spray, increasing the kinetics of the process.

I have worked in a factory where fans with water sprays cooled the environment. It could be measured by a thermometer, and was not only a refreshing feeling due to the evaporation of water on the skin.

As it's been asked about "fan", the fan can't cool anything by itself (imagine using a fan inside vacuum XD), it brings the fluid outside the container to motion hence helping to transfer the heat from container to the moving fluid(air in usual cases).

If we use much more cooler fluid we must be able bring down the temperature significantly.

To address something nobody yet has, though not answering the question (as I can't top the others):

In fact, it ends up so cold that it feels much colder than I would expect given my relatively warm room ($\sim 25^\circ$). However, this could be an illusion caused by room temperature still being less than body temperature, or the mug being fairly cold.

This is indeed an illusion, but not quite the one you describe. If you walk into your kitchen after nobody's been in it for a while, it's reasonable to expect items in the kitchen are of roughly equal temperature. If you touch your wooden chopping board, it won't feel very cold at all. If you touch the metal spoon resting next to the chopping board, it will feel much colder.

This is because we sense heat (or lack thereof) based on how fast our own temperature changes. Because the wood is a poor heat-sink, it doesn't sap heat away from us very quickly, so we don't perceive it as cold. Conversely, the metal spoon saps heat away from us much faster, so it feels colder.

Tea is a good heat-sink.

Not the answer you're looking for? Browse other questions tagged thermodynamics temperature flow evaporation or ask your own question.

0
How long would it take for a cup of water to fully evaporate?

2
What limits the mass transfer from a boiler to a condenser in a sealed vessel?
6
How can ambient cooling cool a system to below the ambient temperature?
6
Why does a copper mug keep my Moscow Mule cold? (Or does it?)
1
Would using a fan cause an air conditioning system to think it's cold?
2
Why does room temperature water and metal feel almost as cool as each other?
3
Do cold liquids reach room temperature faster when covered?
6
Does adding cold water to evaporative air coolers actually produce colder air?
3
Why is it so much harder to keep the same room cool than to keep it warm?