Why are steel thermal mugs much better than plastic ones?

I have several thermal mugs, two of them by the same brand, have the same look, shape and size except that one is in steel (inside and outside) and the other one, plastic. Both have an insulating layer of air or vacuum.

I do not need a thermometer to tell me that the steel one is much better at keeping liquids cool/hot than the plastic one. With water near 90°C inside the mugs, I cannot feel any heat by placing my hand on the steel one (same as a thermos), while the plastic one feels almost like burning.

However steels conducts heat much better than plastic (about one order of magnitude greater thermal conductivity). Therefore intuition tells me that a metallic mug should be less efficient than a plastic one to keep things cool/hot, but the reverse seems true!

I am adding pictures of the two mugs. On the transparent one, we can see the insulating gap. I think it is an enclosed volume so there shouldn't be any air transfer between it and the surroundings. 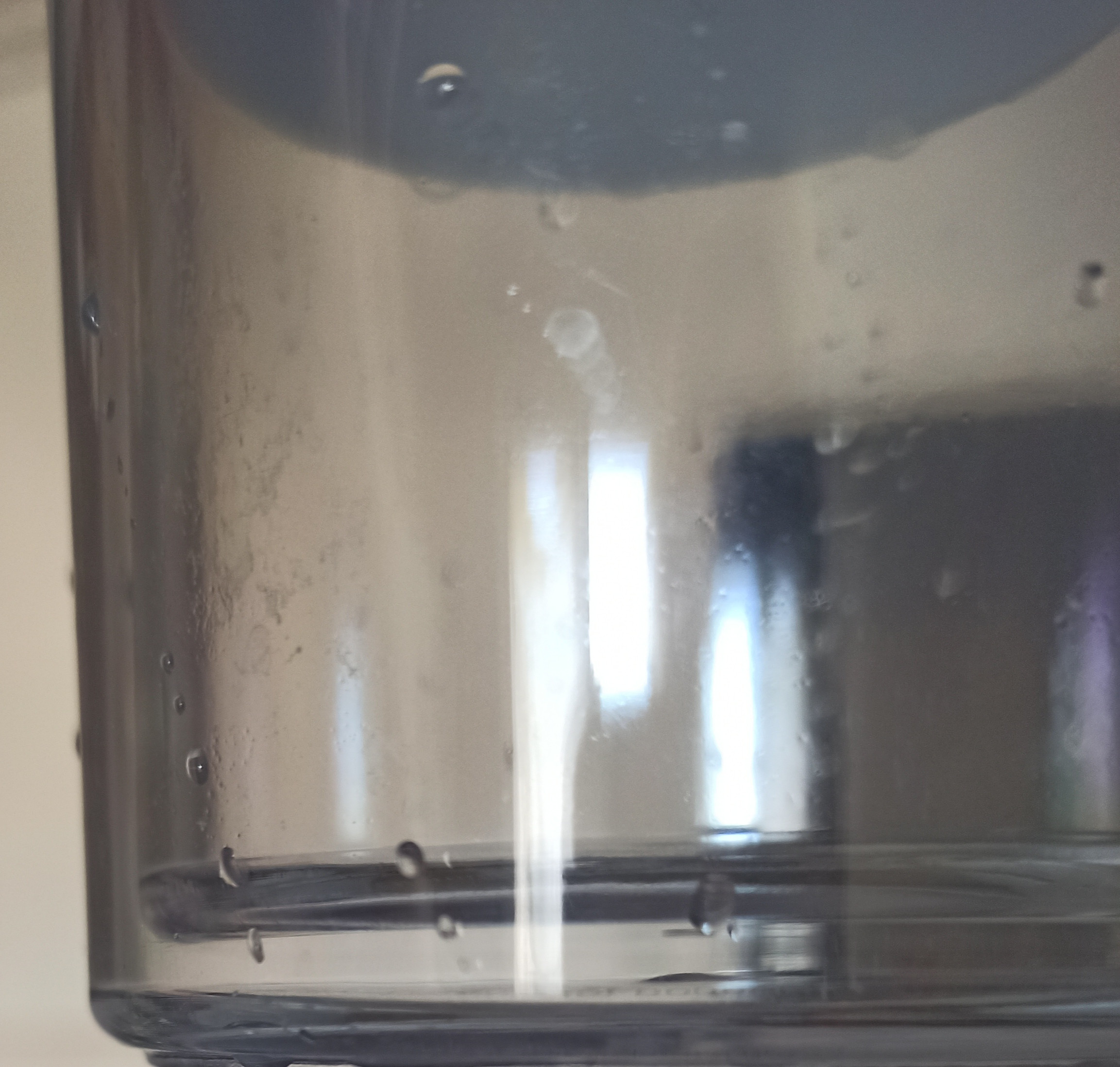 Here's the other picture: 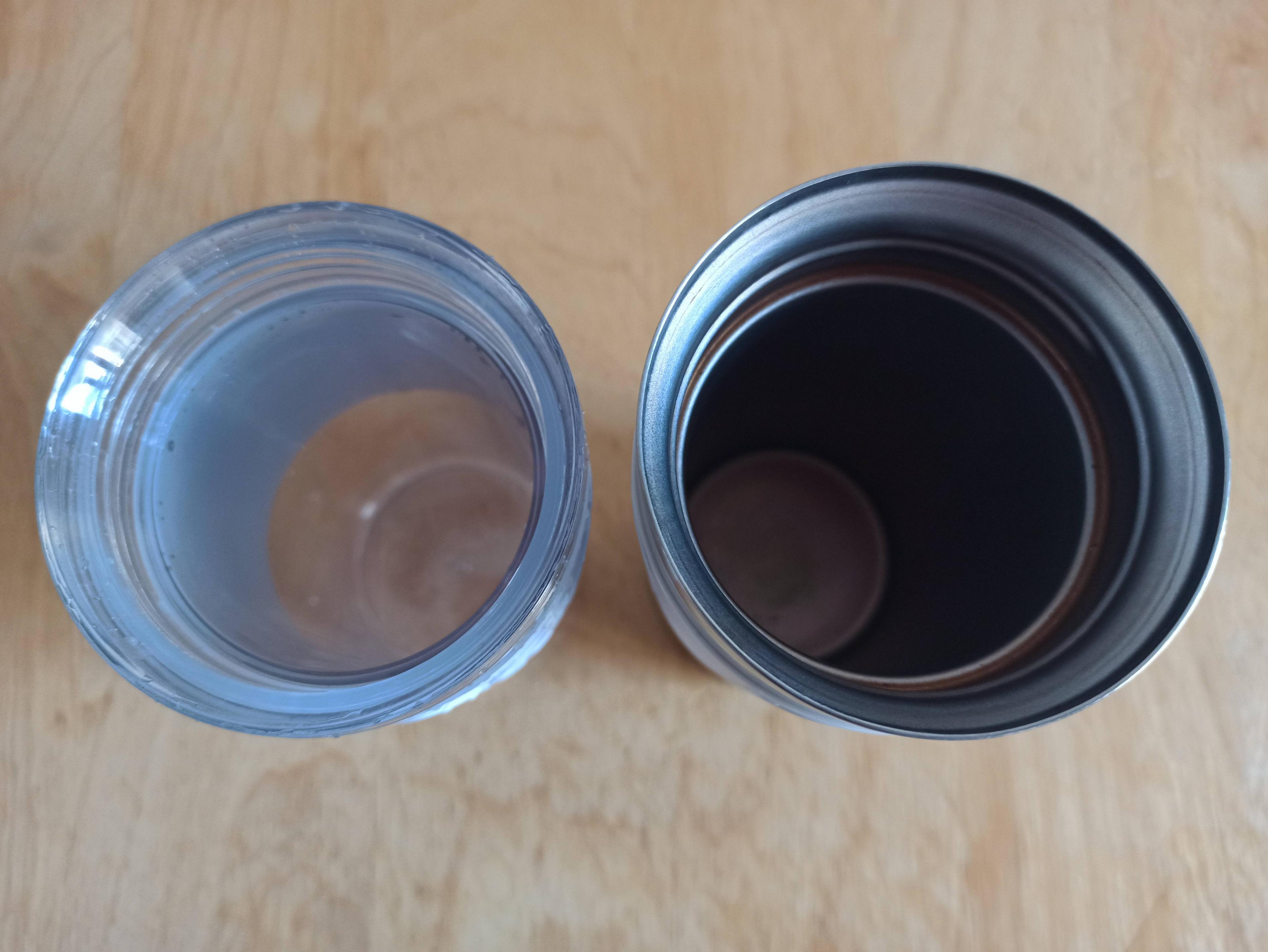 For radiation, $P=A\sigma\varepsilon(T^4-T_\text{room}^4) \approx A\varepsilon\, 462\,\mathrm{W}/\mathrm{m}^2$. That steel is not polished so its emissivity is probably not as low as 0.1, but let's take it as zero for simplicity. And 1 for plastic, to get orders of magnitude. It looks like radiation might play the bigger role (the answer should run the numbers!) at high temperatures. But at lower temperature differences (when the liquid has partly cooled), conduction may play the bigger role.

Note that double-wall plastic cups aren't strong enough to withstand a vacuum and so they usually just contain a thin layer of air in which convection currents (absent in the case of the vacuum) can easily get started. This will bleed the heat out of the contents of the cup much faster than in the vacuum case.

There is a reason steel is better for thermos flasks than plastic: lower emissivity. The way a thermos flask works is that it has two walls ideally separated by vacuum. Heat passes between them as blackbody radiation, with each unit of area transmitting $\sigma \epsilon T^4$ watt per square meter. Here $\epsilon$ is the emissivity, which for polished steel can be around 0.07. Plastics have $\epsilon\approx 0.90 - 0.97$. Hence a plastic surface will radiate more heat than a metal one, and more heat can leak between the inner and outer surface.

You say that steel conducts heat about 10 times better than plastic, but that number applies to a cross section. If you take a look at the connection between "inner" and "outer" cup, the connection of the steel mug relevant for direct conduction is a very thin rim. Touching your way around it will make you realise that there is a considerable gradient near that rim. So the rim is rather relevant for the separation of heat. Outside of the rim, transfer involves two steel-vacuum barriers, and steel is shiny, so it neither emits nor absorbs much heat radiation.

The plastic does not reflect significantly. While its visible-light behavior is not necessarily the same as its infrared behavior, it will be translucent and/or dark to infrared, either of which will result in significant heat transfer even when discounting that you can't evacuate the space between cups.

IR wavelengths range from 700 nanometers to 1 millimeter, which is narrower than the insulative region of the cup.

If the hidden zone of steel is shiny and reflective to the thermal radiation which is emitted by the beverage, then it can bounce a lot of the radiation back towards the inside of the cup.

In industry, they use aluminium foil and bubble wrap fairly similar to the design of the mug, and it's designed to reflect IR radiation.

Steel varies for insulative properties, for example automotive brake rotors have grains of carbon in the structure which are excellent for thermal conductivity, whereas some alloys are less conductive.

The plastic is 20 times less conductive, although it requires a far bigger diameter to achieve the same strength. 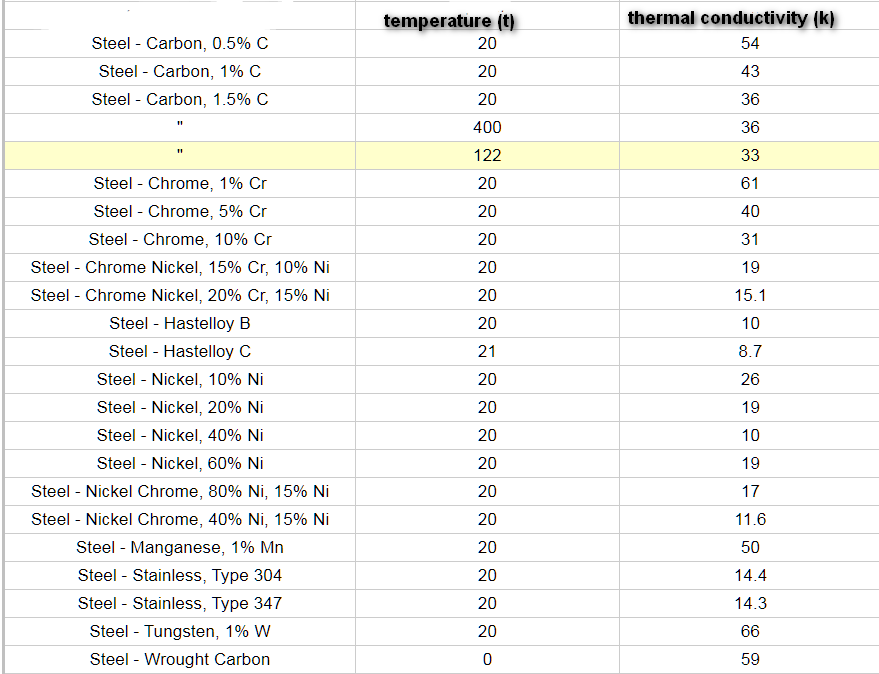 Not the answer you're looking for? Browse other questions tagged everyday-life thermal-conductivity or ask your own question.

3
What devices could be taken round dwellings to measure the thermal conductivities of buildings in situ?
1
Per unit area, is there more heat transfer through the open top of a mug or the side walls?
2
Modeling a wine cooler heat loss to ambient
2
Why does room temperature water and metal feel almost as cool as each other?
1
How to find the variation in temperature at a certain point inside a body undergoing heat transfer via conduction?
0
Material thickness, thermal conductivity and electrical resistivity
1
A thermally conductive gap filler does not conduct the heat as expected. Where does the heat go?
0
Will stainless steel heat up faster than a cordierite-based surface in a gas oven?