In the Chapter 8 of Coleman's many-body physics book, he argues as follows. In the impurity problem, the approximate self-energy can be written as (8.89). I have no problem until this part. However, I cannot understand the yellow-marked part. More specifically, 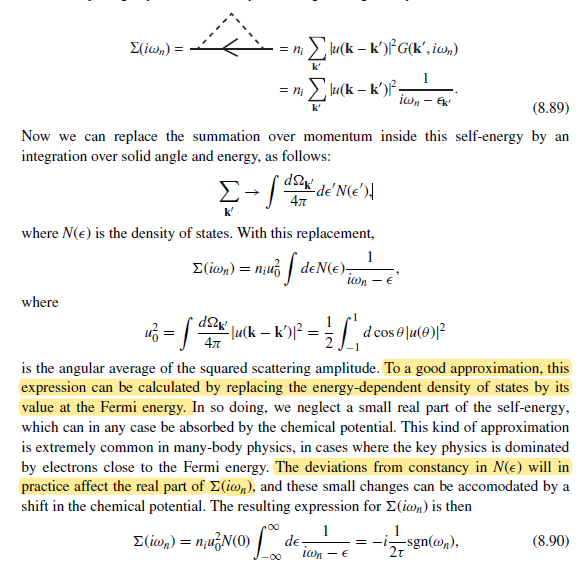 (1) Why can we consider only near the Fermi surface in quantitative/mathematical sense? From the very expression (8.89), the summation $\mathbf k'$ is over all possible momenta! I think the difference of the value of $\Sigma(\mathbf k, i\omega_n)$ (Note that the book writes $\Sigma(i\omega_n)$ but I think the argument $\mathbf k$ is missing in the book.) by ignoring far-from-Fermi-surface contribution is not small.

(2) Why the non-constancy of the DoS $N(\epsilon)$ only affects the real part of the self-energy? Though not seen from the picture, the book also argues that extending the integration range to infinity is an approximation which neglects terms of order $1/ \epsilon_F \tau$. (Here $\tau$ is the scattering rate defined in (3).) Why is it?

(3) One more problem is that the real part of the integral in the last line, namely $$\int_{-\infty}^\infty \frac{1}{i\omega_n-\epsilon} d\epsilon$$ is divergent! (More specifically, the real part diverges and the imaginary part converges as the value in the book.) How the book treats this problem? Though not seen from the picture, the book defines the scattering rate as $1/\tau = 2\pi n_i u_0^2$.

Of course, as he says, a non-symmetric cutoff is divergent, but only logarithmically so, and so the correction to the exact, non-approximated, integral is small.

Not the answer you're looking for? Browse other questions tagged feynman-diagrams many-body fermi-liquids or ask your own question.

11
Questions about the Dyson equation
3
Why quasiparticles do not decay in finite system in random phase approximation?
2
How can density functional theory (DFT) be understood in many body perturbation theory (MBPT) language?
5
Asymptotic relation of Green's function for diverging self energy