Is it possible for $\beta$ be negative in Boltzmann probability distributions? [duplicate]

I am studying the basics of statistical mechanics and Boltzmann distribution.

I tried to use the idea to find natural income distributions, through the method of maximization of probability using Lagrange multipliers, where:

The total population, income per capita and income ranges are fixed. There is a minimum and a maximum income. The interval between ranges are all equal.

When the income per capita is below the average between max and min income the curve seems realistic.

When it is equal to that average, all ranges have the same number of people, and the curve is linear.

But when it is above the average, the distribution is odd because there are many more people in the high income levels, but I don't think it is impossible. At least it is not contradictory. The problem is that in this case, one of the Lagrange multipliers (usually called $\beta$), is negative.

In statistical mechanics $\beta$ is associated to the inverse of absolute temperature. So it can not be negative. But on the other hand, there is nothing in the method of Lagrange multipliers that obliges it (as I can see).

The graph is shown below.

So, is the fact that $\beta$ must be positive a specific feature of energy configuration of particles, or has it a broader interpretation? . 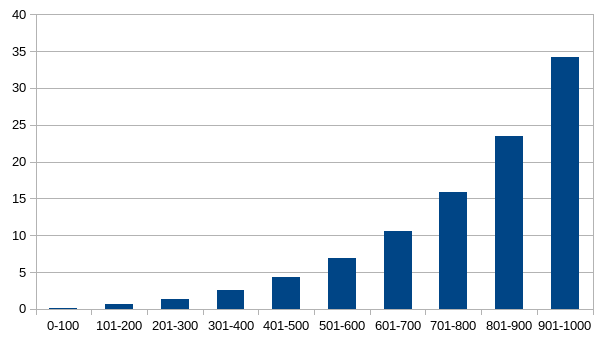 statistical-mechanics temperature
Share
Improve this question
edited May 29 '20 at 0:20

Browse other questions tagged statistical-mechanics temperature or ask your own question.

1
Maximizing entropy in QM (Sakurai's Modern Quantum Mechanics)
2
Statistical Mechanics: Boltzmann partition function
0
Volume fluctuations of a box of volume V in statistical physics makes no sense
1
How is the relationship of the value $kT$ and a degree of freedom derived?
2
Include other degrees of freedom in Maxwell-Boltzmann Distribution possible?
0
Question about model proposed by Boltzmann for the ideal gas
0
Does Boltzmann's distribution require unbounded energy levels?
0
Maxwell-Boltzmann distribution works even for interacting classical particles?
3
Why is the $\frac {1} {\beta T}$ a constant (Boltzmann Constant)?