I am studying Special Theory of Relativity from the book "Special Relativity And Classical Field Theory" by Leonard Susskind. I am not being able to understand the following:

Firstly, if a displacement in my reference frame is purely timelike then why isn't an invariant statement? The author said in another chapter that

Secondly, I do not understand the line:

In my frame, the space components would not all equal zero, and I would say that the object does move in space.

The specification of the space components denotes a particular point in space. How can I say whether an object is moving in space from just the information about the space coordinates? After all, from two different reference frames, an object can have two different sets of spatial coordinates and yet be at rest w.r.t. both of them.

Thirdly, I do not understand why

A statement that all four components of a 4-vector are zero is an invariant statement.

Please help me with these doubts.

special-relativity spacetime
Share
Improve this question
asked May 26 '20 at 13:28

In Special Relativity, we use something known as a spacetime diagram. It looks like this: 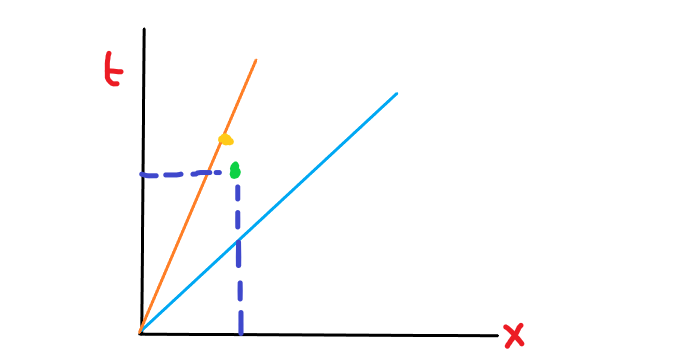 Now, here we are only looking at 1 dimension of space and dimension of time. The green dot represents and event, that takes place at some point in space, and at some point in time. In this diagram, every object can be viewed as a worldline (see the orange line), and the slope of the worldline gives the speed of the object. The blue, diagonal line you see represents the speed of light. Now any line left to the blue line is called timelike, and any line to the right is called spacelike. The blue line itself is sometimes called 'null'.

Now if you have a pure timelike worldline, that means your worldline lies on the time axis. Mathematically, that corresponds to $$ds^2 = dt^2 - 0 = dt^2$$ (where $ds$ is the spacetime interval). But when you have a moving object, travelling relative to you, they can argue that they are at rest and you are moving, so your spacetime interval (according to them) would be: $$ds^2 = dt^2 - dx^2$$ which means in their reference frame, your worldline is not purely timelike. So, being purely timelike is not an invariant.

Now, when you generally say timelike, you mean any worldline to the left of the blue line. Which corresponds to you having velocity less than that of light.

As for the statement

A statement that all four components of a 4-vector are zero is an invariant statement.

And another one of my answers, describing invariants and four vectors in more details (in this context you just need part 1): Why is mass an invariant in Special Relativity?

77
What do spacelike, timelike and lightlike spacetime interval really mean?
13
Why is mass an invariant in Special Relativity?

7
Why define four-vectors to be quantities that transform only like the position vector transforms?
1
Spacelike to timelike four vectors
5
Coincidence of spacetime events & Lorentz invariance
5
Is four-current $J^{\mu}$ necessarily timelike?
2
Do SR Postulates Require the Interval to be Invariant?
1
Lorentz invariance of a wave
1
Proving that timelike and spacelike spacetime intervals are invariant across inertial frames
1
Is mass still a scalar in special relativity?
1
Understanding Space-time intervals and its types